I’m fed up with causes.  The next person who tells me I have to be aware of something is going to get kicked in his protruding parts. This isn’t my fault, either: for the last decade, I (and everybody else west of Warsaw) have been beaten over the head with Worthy Causes.  We’re numb.  We’ve been bludgeoned so many times that there’s simply no feeling left.  The nerves are dead.  The heart strings have all been plucked right out of their sockets.  Only jerks have any tears left to jerk.  Stop it!  If you have any mercy left in your soul, stop telling me how much I have to care.  I care, alright, but every second of every minute of every waking hour is just too much for any human being to endure.  Even Gandhi took a day off once in a while.

I don’t know where all this started.  I have a theory, however, that in the post-industrial world, we had a lump of semi-educated, middle management people who were facing permanent unemployment and rather than let them starve, we created the Worthy Cause industry.  I’m not talking about charity — although, I suppose, the ultimate goal of the Worthy Cause people is to make off with some of your money.  I’m talking about the relentless “Ain’t It Awful?” message that grinds holes in your soul.  Over the last generation, we have built a massive multi-national information infrastructure whose entire purpose is not to solve problems, but merely to tell the rest of us just how bad these bad things are.  Every single disease, social question or natural catastrophe has at least three different agencies bombarding us with that message.  And these agencies are flourishing because they have no natural enemies..d’uh…they represent a Worthy Cause.  It’s like being attacked by unicorns; you can’t fight back.  In fact, I can’t even give you any specific examples because, if I did, I’d get a barrage of “Tell that to the families of the victims” emails.

That’s the real problem.  The Worthy Cause has attached itself to our psyche like some kind of benevolent leech.  We think we get integrity points if we publicly support a Worthy Cause.  We don’t.  Every breathing human being, even serial killers on death row in Texas, is against debilitating diseases that kill millions.  It’s what you’re supposed to do; it’s not a moral choice.  When you join the fight against any disease, there’s nobody on the other team.  Yet, people are clicking the [name the cause] “Like” icon on Facebook like a bunch of Rhesus monkeys getting food pellets; it makes them feel good.  Walk down any street, and you’ll see a phalanx of people wearing awareness ribbons in every colour under the sun — including purple (which, I assume, has something to do with the British Royal family.)  Honestly, it’s impossible to keep up with which colour means what.  Young people are wearing so many of those plastic platitudes on their wrists it’s a wonder they aren’t all walking like Quasimodo going to the bell tower.  I don’t really care what people do (although I do worry that the cause-of-the-week wristbands aren’t biodegradable) but I’m concerned that the purpose is now part of the problem.  Stop any of those people sporting their symbols of solidarity and they’ll probably tell you that they are raising awareness for this, that or the other Worthy Cause.  The question is, however, how much awareness do we need?  More importantly, how many of those resources we’re channelling into raising awareness might not be better spent dealing with the original problem? 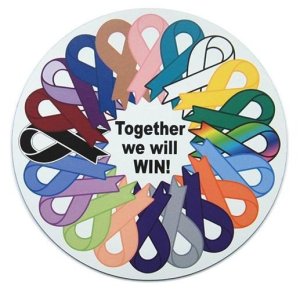 Awareness is a multi-billion dollar industry.  Although originally it served to educate and involve ordinary people in the serious problems that face our society, recently, it has taken on a life of its own.  At any given moment, you can find a dozen Worthy Causes, each with its own feel-good celebrity, elbowing one another for media position.  Disease and disaster are being marketed like soup and shampoo.  The problem is as the media onslaught gets louder — despite the ribbons, buttons and bracelets — I’m not the only one who’s become calloused over.  I’m just the one who will actually admit it.