If you live long enough, you find yourself out of the loop.  You lose touch with your own society.  You don’t understand the language anymore, fashions look scandalous, music is noise, young people are stupid and technology is a battle, not a convenience.  This is why, for the most part, old people are grumpy.  They simply don’t understand the world they live in.  This is the natural order of things, and we all do it.  It’s been going on since Zeus replaced Horus as the god of choice along the Nile.  In essence, we remain brand loyal to the years that made sense to us and we never leave them, regardless of what the rest of the world is doing.  So we fondly remember the 60s or the 20s (or whenever we thought we were cool) and naturally wonder, loud and long what the hell happened to that time.

However, in recent history, this generational disconnection has become more than just a side effect of the trudge to the grave; it’s now happening to young people.  Thirty-year-olds are looking back at the 80s like it was a Golden Age.  Forty-year-olds are wrapping themselves in fashions clearly unsuitable for a widening waistline, and if you’re creeping up on fifty — forget it – you just might as well have been born during Prohibition.  The problem is we live in an age when the layers of knowledge are getting thinner and thinner, and if you miss one, you can never catch up.  Here’s how it works. 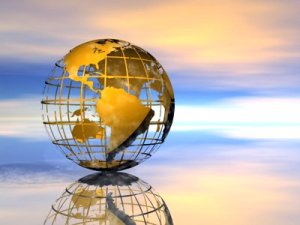 Renaissance, nothing much changed in our world.  Certainly, there were scientific and social advances during that time, but progress was slow.  To your average peasant, one century looked pretty much like the last one: a bit more plague, a little less heretic burning, but no decided differences.  People were born, lived and died in a world dominated by the church, impending famine and war.  Generations of people worked the land, built cathedrals and occasionally bashed each other over the head — for a millennium — with the tools and weapons their ancestors used.  Innovation, when it came, travelled slowly and new ideas were not readily accepted.  The layers of knowledge were thick.

This all changed when a German named Gutenberg built a printing press sometime around 1436.  Suddenly, ideas didn’t have to travel by word of mouth anymore (getting totally screwed up along the way.)  They could be written down 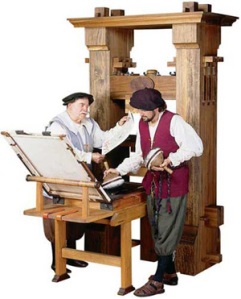 and printed in large numbers.  So, if Wolfgang, a Bavarian smart guy, figured out a better way to grind wheat that knowledge was both easily assessable and, more importantly, widely distributed (with no embellishments.)  With this rapid exchange of information, the
layers of knowledge got remarkably thinner.  By the time Pope Urban VIII was threatening to cut off Galileo’s protruding parts for saying the Earth revolved around the sun — not the other way around — in 1633, there was no stopping it.  Galileo may have recanted his discoveries to save his appendages, but his book remained out there for anybody to read.

Thus it was that invention no longer had to rely on the genius of one person to initiate change, nor the local gossipmonger to spread the word about it.  Books changed all that; ideas became permanently available.  Philosophers and scientists could build on each others’ knowledge just by reading each others’ books.  And each innovation was also written about, in turn, thus spawning dozens of refinements that continued the cycle.  The world of ideas expanded exponentially.  The layers of our society’s knowledge became thinner and thinner.

Skip forward two centuries and these days the layers of knowledge are so thin they don’t last more than a couple of years.  Some are added to our world and expanded upon before people are even acquainted with them.  For example, for 99% of history, people looked at a map if they wanted to know where they were going.  In the late 1990s, the GPS system revolutionized that.  However, before anybody could really cash in on a stand-alone GPS device, it became an accessory (App?) on our Smart phones.  The same thing is now happening with digital cameras and MP3 players.  These devices were born, lived and died in less time than it takes an average person to get a PhD in Sociology.

There is no longer a generation gap in our society.  There is only an information 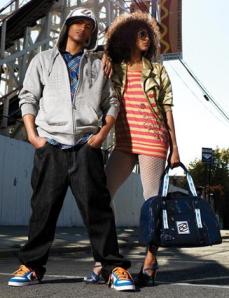 gap.  As the world spins ever faster all around us, we long for the security blanket of the objects we’re familiar with – whether they’re electronic devices or social interaction.  Nobody fully understands the world we live in (not that anybody ever did) but in the 21st century, more and more of us are falling further and further behind.  People are downloading information at such a furious rate they can no longer process it properly.  (For example, that last sentence wouldn’t have made sense a couple of generations ago.)   The result is we look with nostalgia on what we remember as a simpler time.  So the next time you see some kid with droopy drawers, talking to what is clearly a teenage prostitute, in a language akin to gibberish, blame it on Gutenberg: he started it all.

2 thoughts on “If You Don’t Understand Our World, Blame Gutenberg!”