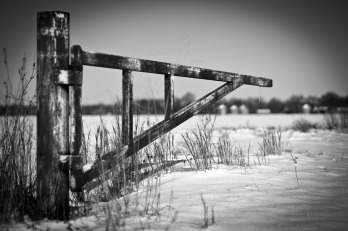 When I was a kid, winter was a cold white dragon, sleeping on the earth.  We could feel his sharp breath in our noses when we walked, bundled like Shackletons, down the long blocks to Mayfair School.  In the afternoon, we would hurry home in the settling darkness, crunch-step quiet, in case we woke him and he caught us far from our fires.  We knew he was there: slumber frozen, waiting to rise and fly at us, howling at our windows, scratching to get in.  No Jack Frost blithe spirit lived in our town; only the dragon, cunning and cold.  We had felt his sleet-sharp talons and had seen his icicle teeth.

But we were children, and children play, like laughter dancing on the wind.  Too cold for snowmen or snowballs, we made soaring angels, etched into the ground, walked tractor tracks on the neighbours’ lawn and hand shovelled frontier fortresses that never got done.  We skated at school and played four-boy hockey under the silvery lights of our night-barren street.  And we went sledding in the cold sunshine on a long Hudson Bay toboggan, old roped and so plank heavy it needed two older sisters to pull us.  And flew earth-bound on The Flying Saucer, a scoop of shiny round kick-dented metal that twirled and hurled us down the low prairie hills as fast as a scream.

And winter was books.  Library heavy, we trudged them home on Saturday morning, like eager travellers, our documents stamped by sensible women in thick-soled shoes, who handed them back with earnest accord.  They were precious passports to foreign lands where children were clever and had gardens and mysteries.  And later, in the deadly Canadian night that howled out loud, just outside, we tucked into pillows, and pajama-warm, called on our friends to come out and play.  And in the long dark, book marked and waiting, there was Sherlock and Tarzan and young Master Hawkins with “pieces of eight” and “the game was afoot.”  Heidi had goats and Huck sailed down the Mississippi.  And there was Ivanhoe and Mowgli and wild Alan Breck.  And one year, the snow and the cold were so deep we couldn’t go to school, and for one whole magic free day, the sisters read Little Women, out loud in the afternoon sleepy and on into the night.

And winter was thick knit socks and tasty mittens, that we called mitts, not meant for chewing.  They hung on strings to keep them safe.  There were big coats that zipped up tight and hats with flaps; pull-down toques and wrap heavy scarves: boots, never tall enough for the snow, which always crept in over the tops with ice melting fingers that searched for your toes.  They lived on the newspapers spread by the stove, half balanced on their necks and warm in the morning.  And winter was flannel: plaid shirts and pajamas and blue striped sheets with heavy blankets that came to your chin.

And winter was every-morning porridge, bubbling like a stomach ache.  We covered it with brown sugar or thick Rogers syrup that came in a can.  And there was soup that steamed so hot it would fog your glasses and burn your tongue.  It was made of big chunks of everything and pennies of carrots and harvests of lentils and barley and beans.

But mostly winter, at our house, was sweet with exotic smells: bubbling chocolate, pot deep and brown, vanilla, cinnamon and dates that became cakes.  There was coconut and ginger and bubbling raisins poured into tarts; layers of jam and shortbread, hard as hockey and tiny black squares of tough little fudge.  We had nuts, piled in bowls and peppermints and long flat boxes of Black Magic chocolates.  Sometimes, the sugar smell of whiskey, when adults had friends who laughed and told us we’d grown.  But, beyond all the rest, there were Japanese oranges, so rare they came nailed in wooden boxes, like the cargo of Oriental kings.

But none of that was for eating.  It was for Christmas, and when I was a kid, winter was Christmas.

3 thoughts on “A Child’s Christmas in Saskatchewan”