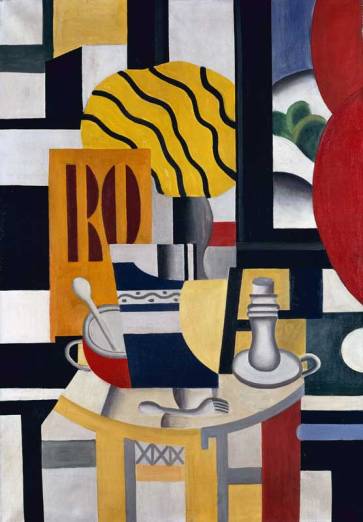 Kevin and Jennifer, a nice couple from Ohio, were angry.  This trip to Europe was a 15th wedding anniversary present to themselves, and they had spent extra to stay in a better hotel.  So there was no excuse for the people next door crashing around and laughing like maniacs at four in the morning.  Finally, Kevin, a no-nonsense HR manager, had had enough and took his fist and banged on the wall.  Startled by the sudden thumping, the people next door, Emily and Dreyfus, desperately swallowed their euphoric “we-did-it” laughter and got up off the floor.  Clenching his teeth, Dreyfus put his finger to his lips and Emily, both hands over her mouth, nodded her head.  They stopped — tightening the muscles in their neck to fend off the giggles — took a couple of laboured big breaths and looked down at the bed.

Even in the grey hotel light, the paintings rose solemnly into the room.  They were beyond magnificent.  They were lost moments, forever captured on canvas, the immortality of genius — and Emily and Dreyfus were completely overawed in their presence.  They just stood there like inarticulate animals.

Finally, Emily took a step back. “So what happens now?” she whispered.

Hypnotized by the power of the paintings, Dreyfus wasn’t actually able to string together a coherent thought.  He sat down on the floor again to put them out of his sight.  Emily sat down beside him, and like two campfire conspirators, they looked into the middle distance for possibilities.

“I need to call off Sydney’s people.  And the driver.” Dreyfus turned his head, “How did you get them in here?”

“Like I showed you, in my sweater.  I just walked in.”

“Just the night manager — and he’s probably seen worse than a Duchess in her underwear.  He won’t make any connections.  But we need to get rid of my clothes.  I may have left fibers or something.”

“Of course, but I have a motor scooter.  Sydney got it for me.”

“Sydney?  You used Sydney?”  It was almost an accusation.

Dreyfus thought for a minute.  It was time to go to work. “Alright, call Sydney.  He’ll get rid of everything.  Just tell him it all has to disappear.”

“Soon.  What time does the gallery open?”

“Nine, I think, but the security guards change at seven.”

Dreyfus looked at his watch.  It was nearly 4:30.  He closed his eyes and calculated. “Now.”

Emily crawled over to the bed and did a long reach under it to get her purse.  She took out her telephone and tapped Sydney’s number.  Dreyfus stood up and pulled the telephone he’d been given out of his jacket pocket.  He went into the bathroom.

“Certainly, ma’am.  More than my share,” Sydney said — and waited.

“I know it’s early, but I need you to come and get the motorbike you got me, and I have a bag of clothes.  I’d like them both to disappear?”

“Where is the scooter?” Sydney’s tone changed slightly.

“On the north corner, by the hotel.  Across from the church.”

“Go set the bag by the scooter, and leave the keys under the tire.  I’ll take care of it.”

A couple of minutes later, Dreyfus came out of the bathroom.

“Alright, I’ve got someone coming for the paintings.  He’ll be right away.”

Emily stepped back to the bed.

“Not this one.  The Modigliani’s mine.”

“No, that’s not part of the deal.  We’re giving these back when they let Marta out of prison.  We’re not thieves.”

Emily gestured at the bed, smiled sarcastically and nodded her head.  “I think we are.  At least, I am.”

“That’s my painting, Sinclair.  You want a painting — go steal your own.”

“I was going to, but somebody beat me to it.”

“Miss your chance; lose your turn.  Besides, I’ve already given you four.  Why do you need mine, too, you greedy bastard?”

“Shhh,” Emily said, with her finger to her lips, “You’ll wake the neighbours again.”

Emily started to collect the things she’d bought over the last few days. “I’m going to go and leave this stuff for Sydney,” Emily said, pulling down her black slacks and stepping out of them.  She took off the sports bra.  She rolled them together and put them — with everything else — into the one-on-every-corner Tati bag.  Then she put on jeans and a t-shirt.  She picked the bag up.  It was bulgy big but not heavy.

“And my painting better be here when I get back,” she said, opening the door.

Later that day, the police were called to the Musee d’Art Moderne.  Before the end of the day, fifty officers and support staff were assigned to the robbery.

Across town, at the Picasso Gallery, the staff wondered why no one had showed up to continue working on the upgrades they’d been promised.

In the afternoon, several French government departments were given videotapes of a group of stolen paintings with a ransom demand that Marta Demonta be released from prison before the paintings were returned.

That evening, in the Clichy-sous-Bois district of Paris, there was a street fire.  A mattress, a chair, a motorbike and a Tati’s bag of clothes and tools were burned.  Nobody called the fire department because there are always street fires in the banlieue.

In a more affluent part of the city, a tall South Asian man and a tailored bank associate locked a large leather portfolio in a safety deposit vault at a private bank building.  The man declined the usual retina and print security scans and simply asked for an access number.

On a bridge over the Seine, a young man dropped a gun into the river.

Further downstream, on a cruise boat, Kevin and Jennifer Becker were enjoying one of their tour’s Add-On dining experiences.

And at a Montparnasse restaurant, Dreyfus, Emily and Simon DeMonta opened a second bottle of wine.  They were celebrating.

This is a work of fiction.  Any resemblance to real people or a real robbery on May 20th 2010 is purely coincidental.