It’s been about a month since Covid-19 fell on our world like a pack of wolves on a flock of sheep.  Fortunately, humans are an adaptable species and we are beginning to adjust to the new “normal.”  Here are just a few examples of what THE NEW NORMAL looks like.

A tiger at the Bronx zoo tested positive for Covid-19.  Wow, I didn’t see that one coming!  But I’ve got a few rhetorical questions.  Why, in a time of medical shortage and emergency, would anyone take the time and trouble to test a tiger?  Who thought it was necessary?  Did they test all the animals, starting with aardvarks, or just the tigers?  If they only tested tigers, isn’t that species profiling?  Shouldn’t all the cat people be going Twitter-Nutsy right now?  And finally, what’s the big deal?  It’s been my experience that maintaining a safe social distance from a full grown tiger is pretty much common sense.

The mayor of Baltimore called on the street gangs of his city to quit shooting each other because the medical facilities were needed to combat the virus.  The gangs, taking their social responsibility seriously, stepped up and called a truce for the duration.  I guess everybody’s got to do their part in these troubled times.

The BBC reported that, in response to a worldwide pandemic that has ripped apart the lives of billions of people on 6 continents, bankrupted millions and killed close to 100,000 – so far — the city of Shenzhen is taking action.  They are about to become the first city in China to ban the eating of dogs and cats.  The ban isn’t happening right now, but will take effect on May 1st because – uh — restaurants and grocery stores still have them in stock?  A lot of people have already booked the barbeque?  Who knows?  Actually there’s no logical reason for a 30 day delay in this legislation (it’s not like anybody in China gets a vote!) but, you’ve been warned: if you want to have Rover over for dinner, in Shenzhen, you better do it soon.  And the Chinese authorities are not fooling around either.  Apparently, there will be some pretty steep fines for Kung Pao Kitten.  So, after May one, anybody with a craving for pet food is going to have to get their ass outside the city limits – end of story.

Several countries have decided not to participate in the Covid-19 pandemic.  Most of these are remote Pacific Island nations like Nauru, Tuvalu and Vanuatu– which makes sense, because they’re all self-isolated by thousands of kilometres of water.  Then, there are other countries like Yemen where the leading causes of death are gunshot wounds and suicide bombers, so a persistent cough is not going to get anybody a lot of hospital time.  But the two places that beggar my imagination are Turkmenistan and North Korea.  They both have boldly declared that they simply do not have any cases of Covid-19.  None!  Okay, Turkmenistan I can kinda understand: I had to Google it just to find out where it was — so I doubt it, but maybe. . . .   However … North Korea?  It shares a land border with China, the biggest bogyman hiding under the pandemic bed; their economies are intimately connected, and thousands of people go back and forth across the border every day.  What are the chances?  Unless, of course, the Glorious Leader, Kim Jong whatever-his-name-is stood on the Yalu River, drove a spear into the Earth and shouted, (in his best Gandalf voice) “Go back to the shadows. You shall not pass!” and the virus turned around and went home.  Given all the other batshit-crazy stuff coming out of that country, sounds legit! 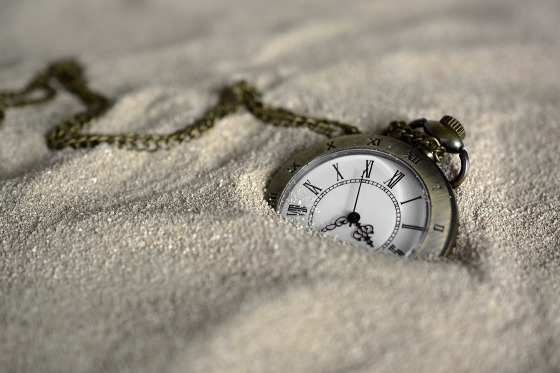 There’s a guy in Norway who wants to do away with time.  We all know, strictly speaking, that’s impossible, so my guess is he actually wants to get rid of clocks.  (The article was poorly written.)  While this is an admirable sunshine-and-lollipops endeavour, it has its roots in a far stupider idea.

Ever since Lucy (Australopithecus) and her sisters decided to go for a walk in Ethiopia, 3 million years ago, there have always been people who want to abandon the march of civilization.  Their contention is that humans are inherently pastoral, and we’re not meant to be regulated by the time-counting machines we’ve created.  In other words, we’d be a lot happier if we just ate when we’re hungry, slept when we’re tired, had sex when we’re horny and enjoyed a few more sunsets.  This idea gets a lot pf play on college campuses and during after-dinner conversations (with the second bottle of wine) but it ignores one essential fact – 3 million years of history.  Oops!

There is actually no evidence to suggest humans were ever a come-day/go-day, God’ll bring Sunday type of species.  The only reason some sophomores jump to this conclusion is our closest biological cousins, chimpanzees, behave that way– and the assumption is, back in the evolutionary day, we did too.  Wrong!  The truth is, all – ALL – the archaeological evidence points to the undeniable fact that humans have always been workaholics.  We didn’t become the dominant species on this planet by hunting, eating and then lying around digesting for the rest of the afternoon.  (I’m looking at you, bonobos!)  No, we used the bonus time between full and famished to work our asses off.  Why?  Because, unlike all the other animals Noah put on the boat, from aardvarks to zebras, we realized that the sun was going to come up again tomorrow.  And our long evolutionary crawl from the savannahs of Africa to the Mars Rover is a litany of labouring for that future.

Everything human beings do, from building the Pyramids to buying more than one potato, is based on our unflappable faith in time.  It’s one of the amazing imaginary concepts (like religion, ownership and fair play) that’s hardwired into our DNA.  But more than that, time is also one of our essential tools, like language and mathematics.  That’s why we’ve always tried to measure it so accurately.  We use time to regulate, manipulate and evaluate our existence; without it, nothing we see around us would exist.

Personally, I believe the quaint notion that humans could live quite happily without clocks comes from the benevolent society we’ve created that allows us massive amounts of leisure time.  We have time to think, and sometimes the things we think are wrong-headed.  Seriously, suggesting that we should turn our backs on hours and minutes because our primeval ancestors didn’t have alarm clocks is as preposterous as saying we shouldn’t have elevators because humans are not supposed to live and work in the skies above Mother Earth.

Anyway, that’s just my opinion — but stay tuned cuz I’m already planning another one in 4 days, 96 hours or 3,960 minutes, depending on how you want to measure it.

When I was a kid, I went to the circus and saw one of the most astounding things I’ve ever seen – an elephant standing on its head.  No big deal, right?  Back in the day, that kind of thing was bread and butter to guys like Barnum and Bailey, and elephants all over the world were doing it– three shows a week with a Saturday matinee.  However, when you’re six years old and you’ve never seen an elephant, that kind of thing sticks with you.

At this point, you have to get beyond the whole animals rights thing.  Yeah, it’s not very nice to treat living creatures like toys (and we were all barbarians before 1980) but that’s not what I’m talking about.  I’m talking about a much more complicated concept.  The idea that someone could think so far outside the box that they could actually conceive of teaching an elephant to stand on its head.  Elephants don’t do that — ever.  It’s a completely original human idea.  Not only that, but, whoever thought of it, had to figure out a way to convince the elephant that it was a good idea, as well.  When you look at it objectively, it’s one hell of an accomplishment.

The fact is human history is built on our ability to metaphorically teach elephants to stand on their heads.  We are the dominant species on this planet because we not only envision things that don’t exist but also find a way to create them.  For example, nobody invented the wheel – round things roll naturally.  The genius was the person who thought of connecting two round things on a shaft so they would roll together, then figured out a way to attach a platform on top of that shaft in such a way that the platform itself didn’t roll.  It’s complicated just trying to describe it!  But our world is full of stuff like that.  Just take a minute and try to explain the mechanics of a button — out loud.  It’s the simplest machine in the world, but it’s built on a set of complex principles that all need to be connected to work properly.  Yet someone, somewhere (13th century Germany, actually) figured it out – the first time.  Levers, pulleys, screws, wrenches and all the other mechanical devices we take for granted were once just figments of somebody’s imagination.  But history isn’t just engineering.  Think about coffee.  Coffee beans on the bush are hard as whalebone and squint-your-eyes bitter, but somebody woke up one morning and thought, “I’ll bet if I pick these beans, roast them, ground them up and pour hot water on them, I’ll get an excellent morning beverage.”  Maybe it happened that way; regardless, it did happen!  Cuz that’s what humans do.  We make something out of nothing.

When I was a child, the circus fascinated me for months.  But for years, of all the amazing Greatest Show On Earth things I saw that day, the only one I really remembered was that lady and her elephants.  And even though I didn’t truly understand it I knew they were something special.