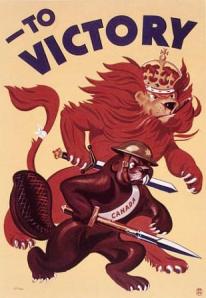 Okay, boys and girls: put away the chocolate and pour out that old, dead champagne.  Christmas is over and we’ve rung in the New Year.  Now, it’s time to get serious again, and, as my old buddy Eldridge used to say, “You’re either part of the problem or you’re part of the solution.”

As anybody who hasn’t been in a Jack Daniels coma for the last 20 years knows, there’s a war going on in Canada.  It’s a nasty little bush war.  There are no front lines and the combatants don’t wear uniforms, but the casualties are real and there are snipers everywhere.  The Government forces control the cities, the institutions and the media, but the countryside and the internet are alive with insurgents.  A virtual Civil War is being fought ruthlessly in Cyberspace and beyond, all across the country.  Canada’s Ancien Regime, established 40 years ago by Pierre Trudeau, is under

attack by a loose coalition of brave rebels whose only weapons are words and ideas.  The Government and their collaborators want to maintain the status quo and the power that goes with it.  The rebels want the freedom they were promised.  They want to enjoy the harvest of their hard work.  They don’t want 80% of the resources given to 20% of the people.  They want to restore common sense and put an end to the unholy fear that Politically Correct generates.  They want a voice that isn’t manipulated by lazy journalists or shouted down by special interest groups.  And they want the future.  They want it to reflect the unique Canadian experience that produced this country.  They don’t want it squandered by short-sighted, flavour-of-the-week activists or the petty politicians who pander to them.

2010 was just one year in this long and arduous fight.   Here’s how some of it went:

We’re winning the War on Christmas.  “Merry Christmas” signs are back in a few shop windows.  Don’t get complacent, though: Happy Holidays guerrillas are still lurking out there.  Intimidation still stalks the land.  Store clerks still laugh nervously and look over their shoulders at the mere mention of the “C” word.  We can’t claim victory until that fear is washed from their tiny little part-time faces.

Unfortunately, our strongest street fighter, Humour, is still on Life Support.  As you recall, Humour was ambushed by the Loud and Proud crowd a couple of years ago and has been in Intensive Care ever since.  Jokes are strictly monitored, and observational humour is restricted to sex, kids and Sarah Palin.  Maybe, if each one of us could be just a little more irreverent in the new year, it would go a long way to help Humour recover. 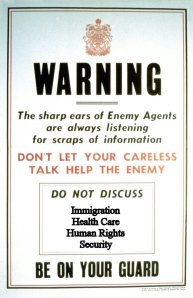 Politically Correct.  These bastions of intolerance are heavily fortified, and it may take as long as a generation for new ideas to breach their walls.  Just a reminder: free speech is strictly forbidden at Canadian universities, so don’t go there alone.  Campus security cannot guarantee your safety.   Canadian author Christine Blatchford and American nutbar Ann Coulter were both howled down by academic mobs this last year.

The Winter Olympics in Vancouver were a great success, and, for 17 days in February, we were all citizens of our country, not just clients of the government.  It showed, beyond all argument, that Canadians don’t need legislation to be Canadian – just ice and snow.

The dark shadow of the Canadian Inquisition still hangs heavy over our land, the tribunals are busy and the show trials continue.  The Inquisitors are bold and brutal, despite being soundly defeated a couple of times recently.  This shows just how much naked power they wield.  Their hunt for heretics is relentless, so don’t give them an excuse.  Manipulate language to your advantage, not theirs; they are easily fooled.  And remember, informers are everywhere.

The national NDP have been lying low all year, hoping to cash in on the Liberals’ imminent implosion.  Jack Layton’s has been saying little and looking wise.  He’s fooling some of the people some of the time, so remain vigilant — he has to open his mouth eventually.  Thank God the BC New Democrats showed their true colours when 13 malcontents brought out the knives and went Julius Caesar on Carole James.  Obviously their “new” democracy doesn’t actually include the concept of a simple majority — one of the foundations of the old democracy we’ve been living with for the last 800 years.

Naheed Nenshi turned politics on its ear in Calgary.  Without

traditional support or media coverage, he took his campaign directly to the people.  He was supposed to be blown out of the water by the established candidates.  However, he showed what hard work and word of mouth can do and how contagious optimism can be.  He surprised everybody — except his supporters – when he was elected mayor.  It was a great victory.

Meanwhile, in T.O. the people had to either elect Rob Ford or call in Dr. Kevorkian.  We can only hope this is a bridgehead into Fortress Toronto.

But best of all, it’s 2011 now, and those old-fashioned ideas from 1969 are another year older, a little more tired and the bullies from the Baby Boom are one step closer to losing their chokehold on our society.

4 thoughts on “There’s a War Going on”