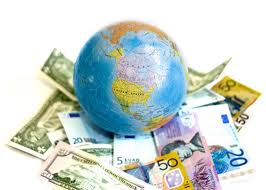 Just in case you weren’t watching, the international playground got a little bit more petulant this week.  It seems not everybody wanted to play nice at the G20 Conference in Los Cabos, Mexico.  For those of you who are unaware (and the rest of the world who doesn’t care) the G20 is kind of a super-bloated G7 (G8, actually.)  Still in the dark?  It’s an economic summit of the boys (and a few girls) who run the world.  Originally, this was a summit of financial people – economists, bankers and such – but lately the politicians have been taking centre stage.  This is unfortunate because most politicians really don’t understand economics; few, if any, have ever even paid their own bills.  Which is why any good accountant will tell you our planet’s financial wellbeing would be better off in the hands of SpongeBob SquarePants and Patrick.  All that aside, the leaders of the top twenty economies do get together every so often (at fun destinations the rest of us save all summer to visit) to take pictures of each other and talk a lot of nonsense.  Invariably, they all pose for a group photo that looks like Mrs. Cranston’s 4th graders all grown up, then they pick up pencils and go home.  It’s kinda like a birthday party with speeches – or it has been, until now.

It’s been a long time since I played “I did not/You did so” seriously, but I can still

recognize a schoolyard squabble when I see one, and Jose Manuel Barroso’s nasty comments the other day were nothing more than that.  Barroso is the head of the European Commission, and he’s all bent out of shape because the politicos in North America have been spouting off about what’s wrong with the Euro.  In a snit, he got his mittens on a microphone, and in less than diplomatic-speak, told the boys north of the Rio Grande to mind their own business.  Actually, it sounded a lot more like “You’re not the boss of me,” complete with fist-on-hip defiance.  Then, before our guys could say “Shut up!” to him, he went on to point an accusing finger across the Atlantic and say, “You started it.”

The maturity level of the powers that be in our world has always been in question, but this really is a new low — especially from this guy.  He’s got some cojones yapping off, considering he’s been President of the European Commission since 2004, long before Greece quit paying its bills.  Not only that,

but during the neverending story of the monetary emergency we call Europe, I never saw him in any of the Merkel/Sarkozy photo-ops.  Plainly speaking, it doesn’t look to me like Jose Manuel Barroso spent any time draining the swamp before the Euro crisis started — or killing alligators after things got rolling.  But he wasn’t finished yipping!  The next thing you know, he’s poor-mouthing the IMF (International Monetary Fund) saying North America should throw in an extra ten billion or so, just in case somebody else south of the Alps decides to go belly-up.  I don’t know how they play the game in Europe, but on this side of the Allegheny Mountains, you don’t call somebody down and then ask him to pay for the privilege – especially when he’s been footing the bill for most of sixty years!

Luckily, all this happened at the G20 Summit because, as anyone who’s followed them closely will tell you, the major accomplishments of these conferences is, in a word, nothing.  Everybody talks a good fight and throws billions of Dollars, Euros and Yuan at each other — in the hope that some of it will stick — but in the end, nobody is willing to tackle the real problem: the bills are coming due and nobody’s willing to pay them.  Actually, that’s why Barroso got in a pout.  Canadian Prime Minister Stephen Harper (who has two degrees in Economics, BTW) had the audacity to point out that Europeans were still spending more money than they were worth, and if they didn’t stop the red ink soon, they were going to drown in it.  Maybe I’m just backing the hometown boy, but I’ve got to agree with Harper.  Europeans have been ignoring their credit limit since before I was born.  In the old days, they could depend on Uncle Sam to cover the shortfall, but ever since Obama discovered there are more numbers after a trillion, they can’t really rely on America’s sweaty twenties any more.

Guys like Barroso should take some time away from the microphone, wander

down to the local McDonald’s and ask the kid behind the counter how she handles her money.  I can almost guarantee that she’s not spending ten times more than whatever minimum wage she earns.  Actually, that little trip might do him (and a few of his G20 buddies) a lot of good.  From my point of view, if the powers that be are going to act like adolescents, I’d like them to at least be smart ones.