I see Julian Assange is back in the news.  This guy’s like last week’s pastrami: he just keeps hanging around.  In case you don’t remember, Assange is that smarmy guy who was behind all the Wikileaks stuff that was heavy headlines a couple of years ago.  As the read-all-about-it Robin Hood of the chattering class, Assange gained a certain notoriety for opening other people’s mail and then bragging about it.  At the time, there was a lot of high-minded talk about an “honesty is the best policy” crusade, but these days there aren’t that many people who still believe Assange’s motivations were purely altruistic.   Besides, for all the hoopla, Wikileaks was (and still is) mainly just a nuisance.  So far, no person or institution has collapsed (or even gone into a decline) as the result of a Wikileaks revelation.  In fact, the only tangible result (that I know of) is some serious chuckles over diplomatic drinks at a few embassy garden parties.

Essentially, Julian Assange is the international equivalent of that kid from high school who was always a jerk.  The one who’d come up behind you and knock your books out of your hand or waited until you weren’t looking and tripped you on the stairs.  He never did anything you could prove or anything even all that serious.  He was just utterly annoying.  Unfortunately, the only way to deal with those kind of kids is beat the crap outta them — otherwise they’ll never leave you alone.  This was true in Miss Mackenzie’s grade nine class, and it’s doubly true now in the wider world.  (As we all know, grade nine and 21st century diplomatic relations are not for the faint of heart.)

Anyway, towards that end, because just being a pain in the ass is not a criminal 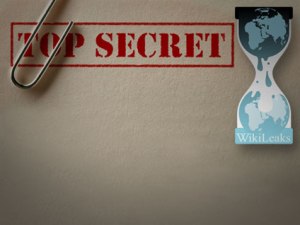 offence, the powers that be got together and figured out a way to put Mr. Assange on ice for a while.  He’s facing criminal charges of the rape-without-pillage variety in Sweden.  I’m not completely convinced that everything is kosher in Stockholm, but you can make up your own mind.  Either way, the British government wants to extradite Assange back to the land of Ikea to face a little Norse justice.  Assange doesn’t want to go because he thinks the Americans are waiting for him at Arlanda airport — with a one-way ticket to Attica.  I wonder where he got that idea?

But here’s where the opera goes comic.  Having exhausted every legal means in Britain to avoid extradition, Julian turned for salvation to that bastion of liberty and human rights: Ecuador.  I’m not making this up.  A couple of months ago, Julian made a dash for the Ecuadorean embassy and claimed political asylum.  What’s even funnier – now they’ve granted it to him!  Suddenly, Britain is in a standoff with a South American country (and it isn’t Argentina.)  The grey suits in Whitehall are heading for the gin even as we speak.  Obviously, they can’t just let Assange go — especially not to a place like Ecuador — but aside from revoking Ecuador’s diplomatic status and storming the building, there’s not much they can do about it.

Meanwhile, Ecuador, for its part, is tweaking the lion’s tail — with some pretty good results.  They’ve dusted off the tried and true “you’re not the boss of me, you neo-colonial bastards” rhetoric and are wailing away as if they were Hugo Chavez’s little brothers.  According to one member of the National Assembly, Rosana Alvarado, “This is a decision of a sovereign government, which doesn’t have to ask for British permission to act.”  Another member, Paco Velasco, stuck a little closer to the traditional script with, “I hope the Ecuadorean people will remain united and reject any form of colonialism.”  Is somebody having an election soon?  It’s always a good idea to have a clear colonial enemy when the folks back home are going to the polls.  Surprise, surprise!  President Rafael Correa’s job’s on the line next February.  What a coincidence!  Just as an aside: this neo-colonial crap is really getting old.  After all, Ecuador has been an independent nation since 1822 — that’s 45 years longer than Canada and nearly a century longer than Australia.  (Just sayin’.)  However, standing up to both Britain and the United States about human rights is going to look really good on the election posters — even if it is only over a little poo disturber like Assange.

So to recap: Julian Assange is asking Ecuador to protect his human rights.  This is a country that’s had more than a few problems with military coups, juntas and presidential musical chairs (not to mention a number of governments who suspended the constitution just because they didn’t like it.)  And who is he asking for protection from?  Great Britain, Sweden and (probably, eventually) the United States, three of the most stable democracies in human history.  Am I the only one ODing on irony here?