We all have secrets.  Over the years, every one of us has collected a list of things we’ve done, said or maybe even just thought that we kinda keep to ourselves.  We all have our individual “reasons” for this, but, in fact, the only real reason for keeping secrets is if they are let out into the open air, they would reflect badly on us or someone we know.  Therefore, we just keep our mouths shut and tell ourselves it’s a harmless bit of selective reporting.  Of course, at the end of the day, we also know that this isn’t strictly true.  In fact, no secret is harmless; if it were, there would be no need to keep it a secret then, would there?

Okay, now that we’ve established that, let’s move on to what I really want to write about: the United Nations.  Remember them?  They’re that international body of scoundrels who have spent the last couple of decades making the world safe from democracy.  I don’t have time to present the litany of their malfeasance here, but there are literally millions of graves all over the world to bear silent witness to their thoughts, words and deeds.  So what are they up to this week?  Nothing short of making a desperate grab for control of the Internet.   Alright!  Alright!  Alright!  Too much hyperbole, I’ll grant you, but hear me out.

Last week, the United Nations convened a secret committee of God only knows

who to discuss the future of the Internet.   Apparently (and nobody knows for sure) these folks are considering a host of recommendations which might deal with everything from who pays for what to whether wdfyfe is dot com or dot ca.  Interestingly enough, this committee is holding its secret discussions in Dubai, the world’s most exclusive all-inclusive resort, which has a particular Internet record of its own.  Last month, they enacted a law which made it illegal for anyone to use, not only the Internet, but any electronic technology to criticize the current regime, or any of its officials, or to distribute information that did so.  So if you want to text your BFF that Sheik Somebody-Or-Other is an old fart, you better not do it in Dubai.  Personally, I’m stunned by the irony, and that’s not the half of it.

First of all, what’s the UN doing with its sticky little fingers on the Internet in the first place?  These are the folks who stood around with their hands in their pockets while 800,000 people were getting butchered in Rwanda.  They’re also the ones who hosted a Conference on Racism in Geneva in 2009 where the major speaker, President Ahmadinejad of Iran, said the Holocaust was an “ambiguous and dubious question” and called Israel a “totally racist” country.  (A little bit of the pot calling the kettle black, don’t you think?)  In fact, it got so bad, even the host nation, Switzerland, walked out.  This is the same United Nations which routinely acts as a rubber stamp for some of the most repressive regimes on the planet while simultaneously accusing some of the most progressive ones of racism, sexism, intolerance and anything else they can think up on the spur of the moment.  Trusting this bunch of clowns with anything more than wasting money and pissing people off is like giving an eight-year-old an unlimited credit card and the vote.  Think about it: when Iran, Malawi and Zimbabwe are all members of the Commission on the Status of Women, can you imagine who they’d pick to run Facebook and YouTube?

However, I can’t really say; nor can anyone else outside the United Nations upper echelon.  Why?  Because the entire conference is so super secret we peons are not allowed to know.  And why is that?  Your guess is as good as mine.  But this is what we do know.  A bunch of has-been diplomats, with a track record that would get any thoroughbred sent to the glue factory, are sitting around one of the most expensive and least democratic places on the planet.  They are deciding the fate of the cheapest, most far-reaching and completely democratic institutions in human history.  And they’re doing it because? … Nobody knows why. 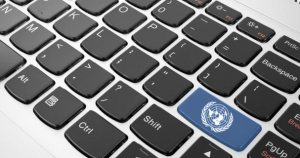 Call me paranoid, but when a bunch of people I never voted for, don’t know and, most importantly, don’t know anything about, may very well be deciding what I can download, upload, look at or comment on across the future of my Internet connection, I get a little worried.  Especially when the best explanation they’ve given so far is “Don’t worry.”

And beyond all that, they’re conducting this shady business under a Maxwell Smart Cone of Silence.  It all kinda sounds like the plot from Get Smart doesn’t it?  The problem is, with the United Nations playing the incompetently evil organization trying to take over the world, we’re going to need more than Agent 86 to thwart them.  ‘Cause even Max would tell you, “This kind of secrecy is never benign.”