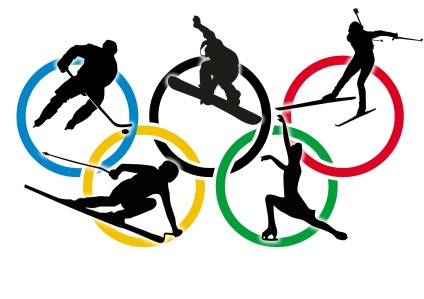 I love the Winter Olympics!  When you have a ton of young people flying through the air and chasing each other on glare ice — what’s not to like?  Plus you get hockey!  Unfortunately, even though all winter sports are based on the single, simple premise that ice and snow are slippery (Think about that for a moment!) the Winter Games are starting to get cluttered up with too many variations on that theme.  For example, you have two kinds of ski jump, several kinds of skiing and God only knows how many kinds of figure skating.  Folks, there are only so many things you can do with frozen water before it just gets silly!

Curling — The Scots invented golf, the hammer throw and the caber toss. Curling is just the last in a long line of sports that allows you time to have a beer and a cigarette while you’re waiting for your turn to play.

Speed skating — This sport makes sense to me.  I think it evolved when a bunch of Europeans were skating around, puttin’ on the brag.  “Hey, Heinrich! You are like the skilpadde.  Min bestemor can skate faster than you.”  Heinrich got pissed at Olaf for dissing his gromutter, and the race was on.  This worked well for a number of years — until the Dutch decided to play.  Ever since then, it’s been “I don’t know what you bet, but if you’re not wearing orange, you’re not going to win.”  Of course, the most exciting event is the relay — which is basically Roller Derby with knives on your feet.

Biathlon — This one is just weird!  Ski as fast as you can with a high- powered rifle on your back until you come to a target; stop, whip out your weapon and shoot.  Then, pack up, ski off to the next target, and do it again.  This happens several times.  Who the hell thought up this sport —  Nordic assassins?

Skeleton and Luge — I think these two are basically the same sport!  In both events, the participants jump on a sled the size of an iPhone  and fling themselves down a mountain at 80 miles an hour (130 km/h.)  Sounds like fun, huh?  The only difference I can see is Skeleton people go headfirst because they want to look death in the face; whereas the people who favour Luge, lie on their backs because they want it to come as a complete surprise.  However, I do believe the Luge folks should get extra points.  Take a look: those kids are steering that sled with their bum!

Half Pipe — The name says it all.  I’m pretty sure most snowboard events were invented by stoned Lifties on their day off, because no sane, sober person would ever attempt any of that stuff.  Fun Fact: Snowboarders were originally called snurfers and “real” skiers made fun of them.  These days, snowboarding is a multi-million dollar industry.  Who’s laughin’ now, Jean-Claude?

Ice Dance — Libido on ice.  I’m certain the real reason Puritans outlawed premarital sex was because they were afraid it would lead teenagers to Ice Dance.