How cool is Christmas?  Christmas is so totally cool that it has its own Playlist.  No other holiday has a catalogue of special songs you never hear any other time of the year.  For example, they don’t start playing Valentine’s Day music in the middle of January and drive you crazy for an entire month until finally you just wanna kick the … but I digress.  My point is, unlike every other holiday on the calendar, Christmas is such a Maximum Celebration it has its own musical genre.  Every year from midnight October 31st until midnight December 25th it’s wall-to-wall deck the halls – “White Christmas,” “Blue Christmas,” “Don’t Eat the Yellow Snow.”  Then there’s “I’ll be Home for Christmas,” “Daddy, Don’t Get Drunk On Christmas” (which is a real song, BTW) “Christmas Island,” Christmas Kisses,” ”Christmas Lullaby,” “Here Comes Santa Claus,” “Christmas in Killarney” and OMG, “Christmas Carols by the Old Corral.”  There’s just no end to it.

Plus, there’s all the novelty songs.  These are those stupid little ditties that they trot out every year cuz somebody thought they were funny back in 1951.  Crap like “Grandma Got Run Over By a Reindeer,” “I Yust Go Nuts at Christmas” and the second-worst Christmas song ever written*, “All I Want for Christmas is my Two Front Teeth.”  These unholy staples of AM radio have been haunting the holidays ever since Gene Autry, the Chipmunks and “Jingle Bell Rock” ruled the airwaves.

However, the thing that kicks Christmas through the goal posts of Super Holiday Stardom is its weird ability to act like a super vortex and suck a bunch of ordinary winter song into its musical orbit.  Think about it!  Do you ever hear, “Frosty the Snowman,” “Winter Wonderland” or “Jingle Bells” in January?  No, you don’t.  Even though these songs have absolutely nothing to do with Christmas, never even mention the holiday and were quite possibly written to celebrate a February week-end in Vermont, they are all de facto Christmas songs.  As well as, “Let it Snow,” “Sleigh Ride” and the recently disgraced, “Baby, It’s Cold Outside.”  Why?  Nobody knows.  Christmas just came along and said, “This one’s mine.  This one’s mine.  And this one’s mine.”  And nobody was brave enough to say “No!”  That’s some holiday cojones, boys and girls.

Personally, I think there’s too much Christmas music, and I like to stick to the old favourites.  I have a general rule of thumb that if it hasn’t been covered by the Vienna Boys Choir, I’m not really interested.  Although I do have a special place in my heart for Harry Belafonte’s “Mary’s Boy Child.”

*The worst, of course, is “The Little Drummer Boy” which was written specifically to vex me. 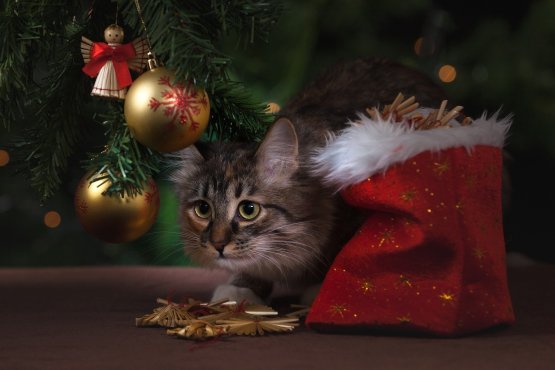 Okay, here we are, 12 days before Christmas (11, actually) and your holiday stress level is at DefCon 4.  The tree is up, but it’s been cat- attacked twice, and now the lights that aren’t supposed to twinkle – are twinkling.  Amazon refuses to send half the gifts you ordered until January 23rd.  Uncle Jerry wants to bring his step-daughter, Blaster, to Christmas dinner cuz she’s on a day pass out of County Jail.  And somewhere in the night, the tank on the toilet starting making a strange, chugging sound.  So what else could go wrong — right?  Don’t tempt the gods, because they’ve just moved your office’s Seasonal Celebration Party (“Oh, you didn’t get the email?”) to the same night as Grandma G’s 8 pm flight from Wisconsin, and in a couple of minutes, your youngest child, who’s 13, is going to announce she’s an atheist and won’t be participating in this year’s “hypocrisy.”

However, there’s no need to grab an adult beverage and hide in the upstairs closet until December 27th.  Help is at hand.  I’m going to tell you the two secrets of Christmas that will wipe away the stress faster than 2 Tylenol and a shot of vodka.

Secret #1 – The last perfect Christmas was the first one. Yeah, yeah, yeah!  We’ve all heard the stories and seen the pictures on social media, but the truth is they’re all lies — there’s no such thing as the perfect Christmas.  Not even Martha Stewart (the Queen of DIY guilt) and her army of serfs and servants could put together those magnificent offerings without divine intervention.  Plus, Janet Perfect-Size-Zero down the street might think she’s wowing the world with her handmade canapes, but when you’ve got one kid in therapy, another one headed for Detox and a husband who’s addicted to football and Sharon from Accounting, wasting hours chopping olives is kinda counterproductive.  Here’s the deal: the only person who’s going to notice that the twinkly lights aren’t supposed to twinkle or the veggie plate is from Costco is your sister-in-law, and there’s no satisfying that woman.

Secret #2 – Memories aren’t made of perfection.  Think about it!  Which Christmas do you remember?  The one when everything marched along like a Nuremburg rally or the one when your sister got her head stuck in the dishwasher?  Dishwasher — no doubt!  I have friends who have mushroom soup for Christmas dinner every year.  It’s a fine tradition that started when the holidays went so far sideways that the turkey actually caught fire from too much cognac in the dressing.  I have some other friends who always throw their Brussels sprouts out the back door because – uh – I don’t know if anybody even remembers why.  My point is Christmas is all about family, not symmetrical trees or perfectly-spaced lights — and families are flawed.  That’s what makes them interesting, maddening and fun – just like Christmas.

So, now that you have the two secrets of Christmas under your belt, toss back that vodka, chase the cat away from the tree, book a taxi for Grandma G and a plumber for the toilet, tell your daughter atheists don’t get presents, phone Uncle Jerry and say, “Of course Blaster’s welcome for Christmas, but unfortunately we won’t be using the good silver this year.”  Then sit down at your computer and cancel all that crap from Amazon because you’re going with gift cards — like you wanted to in the first place. 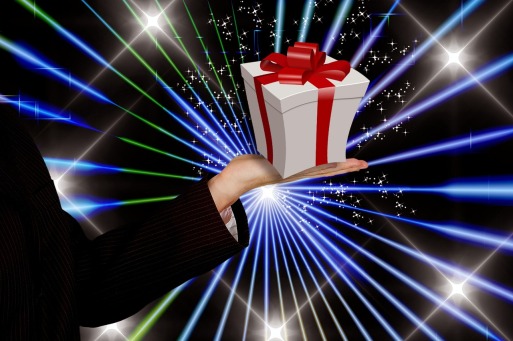 Ever since The Year dot (literally) people have been tying themselves in knots, trying to define the true meaning of Christmas.  And, over the last 2-plus millennia, psychologists, anthropologists, philosophers and editorials have covered a lot of territory – everything from eternal salvation to Amazon Gift Cards.  Good on ya, folks but you ain’t even close.  The true meaning of Christmas … is loot.  That’s right!  Like it or not, admit it or don’t, the harsh reality is Christmas is all about the presents.  Let me explain.

Right from the very beginning — Here we are in Bethlehem.  There’s Mary, Joseph, Jesus in the manger and a couple of sketchy shepherds.  There’s a knock on the door.

And thus, Christmas was born.  Plus the fine tradition of getting useless crap for Christmas (I’m looking at you, myrrh) instead of something Mary and Joseph might actually need – like an extra helping of gold.

Fast forward 2,000 years or so – Here we are visiting Santa Claus.  There’s you (as a little kid); there’s a parent (or two); there’s the photographer, the incessant jingle bell music and a couple of over-happy elves.  You’re not there to discuss the care and feeding of flying reindeer or talk about the weather at the North Pole.  You’re there to negotiate.  You’re there to effect a deal between you and Santa so he’s convinced you’ve been more nice than naughty and therefore deserve your share of the loot.  You know it’s the truth, but it’s no particular sin.  Remember, it was the parents who told you how the system worked.

Add a couple more decades — It’s three days before Christmas.  There’s you (as an adult.)  There’s a couple of your kids, a spouse, maybe a dog.  You’re walking over a crisp blanket of new-fallen snow that crunch, crunch, crunches under your feet.  You can see your breath, and your hands are warm in cozy mittens.  At home, there’s hot chocolate, and Grandma’s making cookies.  The coloured lights from the street twinkle and dance across the early evening, and there’s the faint sound of children singing,

“Oh little town of Bethlehem
How still we see thee lie.
Above thy deep and dreamless sleep
The silent stars go by.”

It’s the most idyllic scene, out of the most beautiful Christmas card you could ever imagine … and what are you thinking?  Totally stressed, cuz it’s your turn to host the family dinner, you’re thinking, “What the hell am I going to buy Harry/Harriet and Uncle Bob for Christmas?  Screw it!  Amazon Gift Cards.”

I rest my case!