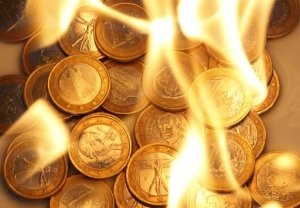 I’m amazed at how long it has taken our European friends to realize what reality looks like.  It’s as if they got into the Christmas cheer back in 1989 and never got out.  If you recall, that was the year the two different Germanys danced on the wall and all was well with the world.  At that time, the idea was that without a bothersome Iron Curtain messing things up, Europeans could finally learn to live with each other and become the superpower they were always meant to be.  This has been Europe’s elusive dream ever since Hadrian ruled all the good bits of the continent at the high-water mark of the Roman Empire.  The cunning plan was to slowly integrate everything from the North Sea to the Mediterranean and create an economic powerhouse that would fear nothing in its path.  What a difference a generation makes!  These days, the Germans aren’t dancing anymore — and neither is anybody else.  The grandiose schemes of 1989 got waylaid — for good and sufficient reason.  Europe is now on the brink of a catastrophe that would make the fall of the Roman Empire look like a minor inconvenience.  So, after only twenty years to think about it Europeans are suddenly looking around for — as Monty Python once said to an astounded television audience — “Something completely different!”

Even as you read this, Merkel and Sarkozy are discussing (plotting is such a hard 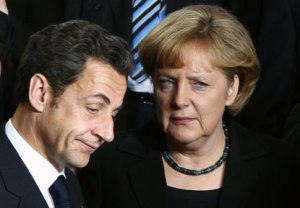 word) ways to take over Europe.  In the 3,000 years of recorded European history, there has never been such a reluctant power grab.  Neither one of them wants this (although Sarkozy has that suspect Napoleon thing going on) but at the end of the day, they have no choice.  They have to do it.  It’s either that or there isn’t going to be a Europe to take over.  Time is running out, so whatever they do had better be big and bold and work right out of the box.

You need to understand something about the European situation before you can understand what Merkel and Sarkozy are up against, however.  There’s a difference between the European Union and the Euro zone.  Not all countries in the European Union use the Euro.  Great Britain, Denmark and Sweden among others, still use their own pounds, krone or what have you.  Therefore, their

stake in the game is quite different.  Even though their national currency is not going to be at the epicentre of the financial earthquake, the non-euro EU members are obviously going to take a serious kicking if the Greeks, Italians and Spanish hit the fan.  Plus, they’re probably going to be on the hook for any attempted bailout.  You don’t have to be a Euro sceptic to see more liabilities than benefits.  If things in Europe aren’t fixed pretty quickly, there’s a real danger that a lot of people will be wondering just how much this Euro experiment is actually worth and they might even start looking around for the exits.   Merkel and Sarkozy already know that it’s not just the Euro that’s at stake here but the future of the European Union itself.

Merkel and Sarkozy need to forget about integrated economies, long term solutions, ECB realignment, blah, blah, blah, and restore some confidence in the Euro – today.  The Euro is an unusual currency.  Like the magician’s assistant in the levitation trick, there’s nothing holding it up.  Whole books have been written on what the Euro is and isn’t, but they all boil down to the same thing – faith.  The Euro is based on the simple idea that 400 million Europeans are willing and able to pay.  That’s it.  The Euro is in such dire straits right now because nobody believes that anymore.  The big money boys are looking at the balance sheets and thinking they’re about to get left holding the bag — and it’s going to be full of useless paper.  Therefore, like Sunday morning evangelists, Merkel and Sarkozy need to convince them that as long as they keep the faith, they’re not going to go to hell. 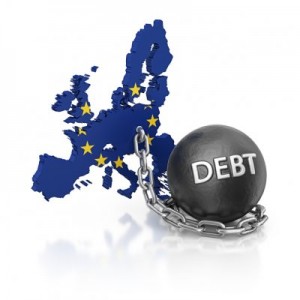 The only way they can do that is quit applying billion dollar band-aids and lay down a heavy duty set of rules.  As of this morning, the nations of the Euro zone need to start taking their fiscal marching orders from the bureaucrats in Berlin.  It’s the only way the banks are ever going to refinance the ridiculous mortgage the Europeans have saddled themselves with.  If Germany and her little sister, France, are willing to co-sign an unlimited line of credit to the southern half of the continent — and put up their taxpayers as collateral — they need to have a serious repayment plan.  Otherwise, they are just going to be sucked into the bottomless financial pit the Europeans have been digging down south.  This isn’t about national sovereignty or petty politics; it’s cold, hard economics.  Anything less and the crisis just deepens and threatens the European Union itself.

Merkel and Sarkozy have got to get tough and invoke the Golden Rule: We make the gold; We make the rules.