China is flexing its muscles today.  They’ve organized a boycott of the Nobel Peace Prize Ceremony for Liu Xiaobo.  He’s one of the few survivors of Tiananmen Square in ’89, and he’s currently serving an 11 year prison sentence for not keeping his mouth shut.  China’s position on his Peace Prize was made clear when they said, “We are against anybody making an issue out of Liu Xiaobo and interfering in China’s judicial affairs.  We will not change because of interference by a few clowns.”  I’m not sure whether anybody knows if the “few clowns” are confined to the Nobel Committee or not.  Either way, the boycott is supported by all the usual suspects: Iran, Cuba, Vietnam, Venezuela and about a dozen other countries who think Human Rights are something the Americans made up just to piss them off.  Russia has joined the boycott too, but that’s understandable insofar as they don’t want of string of their own dissidents trooping to the podium in the future.  The most notable of the absentees, however, is going to be Navi Pillay, head honcho of the United Nations Commission for Human Rights.  Somehow, she suddenly discovered she had a subsequent engagement.  While it’s true the UN has basically been turned into a Will Ferrell comedy, it’s still significant to note that China has enough pull in the Hall of Has-Beens to push their Commissioners around.  Diplomats are like dogs; they know who’s jerking their chain.

The United Nations isn’t the only place that China is calling the shots, 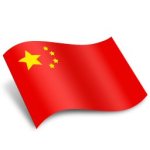 these days.  More and more, developing nations, especially in Africa, are looking at China as the model to build political and financial power around.  They see double digit economic growth as a good thing and they want to get in on it.  The inherent value of democracy pales in comparison to money in the bank.  China is using this situation to enhance its power around the world.  They are dropping billions into developing markets with — and this is extremely important — no strings attached.  In other words, financial assistance from China doesn’t come complete with the Clintons wandering around, asking awkward questions and wanting to see the receipts.

To be fair, China isn’t doing anything that much differently from any other world power in history.  They’ve amassed a certain level of

economic and political stability, and they want their “place in the sun.”  In their minds, they think they’ve earned it and they don’t feel the need to be lectured at by western democracies who collectively look like a train wreck.  On the one hand, I don’t blame them.  I wouldn’t really be interested in the EU telling me what to do, right now.

On the other hand, China has a lot to answer for.  They didn’t get to their present position of power without some casualties along the

way.  Their environmental record sucks.  Their safety standards are literally murderous.  And their trade practices are on the Tony Soprano side of criminal.  There’s also Tibet and their treatment of the Uyghur and a few other ethnic minorities.  These are serious problems that China is going to have to address very quickly.  In an ever-shrinking world, their impact is felt far beyond China’s borders.

Then, there’s the whole question of Human Rights.  Since Tiananmen Square, there has been an ever-increasing constriction on what ordinary Chinese people can see, hear, say and possibly even smell.  Even as we speak, most western news agencies — including the BBC and CNN — have been blocked out of China.  Over the last decade,

China has vigorously defended its cyber-sovereignty and aggressively kept things like Facebook and Google from reaching into the Middle Kingdom.  They see western ideas of personal choice and freedom as dysfunctional in Chinese society.  They maintain that you can’t build the world’s second largest economy when you have a billion people running around in all directions.  That’s why a Nobel Prize to a dissident like Liu Xiaobo is such a big deal to them.  They believe he is the potential thin edge of the wedge that could tip the whole structure over and send it crashing into chaos – and they’re absolutely right.

History teaches us that you can’t give a modern society economic power without political power.  It’s impossible.  In a nutshell, a robust economy breeds a middle class, which has to be educated to keep the machines running.  Educated people discover ideas, the great equalizer in any society.  And people who believe in equality don’t like to get pushed around.  It’s just that simple.  Totalitarian regimes have tried throughout history to suppress ideas, but the only thing that happens is discussion goes underground and the accumulated anger and frustration continue to build.  Eventually, it boils over.  China has a rendezvous with history that cannot be denied.  They can either accept it, and avoid catastrophe by slowly moving towards an open democratic society, or they can carry on deluding themselves and suffer the consequences.  It’s not as if the Dragon Throne hasn’t seen revolution or two in its time.  Believe me, this particular dynasty isn’t much different from all those other ones.

Liu Xiaobo will languish in prison.  Academics in North America will slap on another bumper sticker beside “Free Tibet,” and the world will continue to spin.  But one of these days, unless something changes very soon, another Liu Xiaobo is going to come along, and the Mao Dynasty is going to end up just as dead as the Ming.

arrest in Yangon, Myanmar (Rangoon, Burma).  In Canada, we clicked our breakfast juice glasses and said “Good on ya!”  In Myanmar, Aung San Suu Kyi walked from her house to the iron fence: the voice of democracy, able to speak again.   I’m glad she’s free.  I’m glad that the world didn’t forget about her while she was in the hands of the Myanmar military.  I’m glad democracy has another chance in a country I know nothing about.  I’ve always thought of democracy as a delicate thing – a fragile institution that needed to be handled with care.   But what the hell do I know about democracy, anyway?  Not much.  In my world, democracy has always been there, like clean water, or warm socks or 30 different kinds of breakfast cereal.  The constant of it lulls you to sleep.  Canadians wouldn’t know repression if it bit them on the ass.

In other parts of the world, repression isn’t just an entry on the Word-of-the-Day calendar.   It’s a living, breathing thing.   It stands on street corners with bayonets and

rifles.  It walks through the sunlight to work in the shadows.  It’s a slogan, marched down a wordless street, and it’s a scraping scuffle in the whispering night.  It lives on fear, and if you listen, you can hear it chewing in the darkness.  In other parts of the world, repression doesn’t have a name because people are afraid to say it out loud.  Yet it’s always there like, some tainted fog, hiding prisons and torture and a hundred other nameless horrors.  These are the weapons of the brutal, who seek to rule without law and to silence those who oppose them — like Aung San Suu Kyi.

Aung San Suu Kyi wasn’t always in politics; actually, she half stumbled into it.  Although her father was one of the architects of Burma’s independence from Britain in 1947, and her mother was the Burmese Ambassador to India, she lived outside her country for many years, in Britain and the US.  In 1988, she returned home when her mother became ill.  At the same time, there were widespread protests in Burma and calls for democratic reform.  In the middle of this national upheaval, Ne Win, the general who had controlled Burma since 1962, resigned, and created a political vacuum.  It was filled with louder calls for democracy and surging protests against Burm 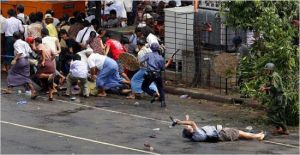 a’s military rulers.  This was called the 8888 Uprising, but auspicious dates and unarmed monks are no match for disciplined troops — thousands were killed.  Aung San Suu Kyi had a famous name and a love for her country.  She and others formed the National League for Democracy and came out of the chaos as the leading voice for reform.  They were so strong it forced the ruling junta to place Suu Kyi under house arrest and nullify the League’s 1990 election victory.  Since then, despite the world watching and a Nobel Prize for Peace, Aung San Suu Kyi has been isolated by the military rulers of Myanmar.  She has remained under house arrest, off and on, for the last 21 years, sitting in her home in Rangoon, playing the piano and reading philosophy.

Now, she`s been released.  But nobody`s taken off their uniforms yet or put away their riot sticks.  The Myanmar military is still firmly in

control and quite willing to put a stop to anything or anyone they see as a threat.  Suu Kyi and the democratic movement in Myanmar have been here before, and there’s no guarantee that this isn’t just another empty gesture.  History has a way of showing us what happens next, though, and somewhere Aung San Suu Kyi and the military rulers of her country are going to have to face each other.  Then the choices become clear – Rule of Law or Might is Right.  There’s no way around it — tyranny and democracy can’t live together.

We fear for democratic institutions and with good reason: evil never takes a vacation.  There’s always a politician, a general, a religious leader or a fanatic who’s willing to take control of our lives for us — for our own good.  They always come with promises and just a “few” restrictions until things get under control again.  They have a knack for enlisting convincing arguments and well-meaning people to do their bidding, and they prey on the weakest of us to subvert our society.  I’ve always thought democracy was fragile in the face of this – until today.  It’s not, and I was wrong.

We live with democracy, so we have no idea how strong it is.  We see its frailty and worry about its flaws.  We have the leisure to debate its shortcomings and the luxury to criticize its inadequacies — sophisticated chatter across an after dinner living room.  In other parts of the world, democracy writes its name in purple prose.  It feeds children and protects their parents.  It powers learning and attacks ignorance.  It guards law.  It builds hospitals.  It shelters the weak and gives power to the strong.  No matter how many times dictators come to destroy it, it always rises again to topple their statues and prosecute their crimes.  Sometimes, it’s a playwright in Czechoslovakia.  Sometimes, it’s an

electrician in Poland.  Sometimes, it’s a South African who never lost faith despite 27 years in prison.  Sometimes, it’s a guy in a white shirt, facing down a tank.  And sometimes it’s a little woman in Myanmar, playing the piano.  Tyrants tremble when democracy speaks because no matter how many tanks, how many soldiers, how many bayonets a dictator gathers around him, democracy always wins. 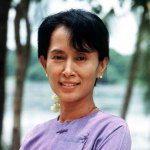 So this morning over breakfast, I’ve changed my mind. I’m putting my money on a tough little chick in a lilac dress.   And while I’m at it: Liu Xiaobo, good on ya, buddy: China, you’re next.