With less than a month left in the Arab Spring turned Chaos Summer, it looks like Libya is the next North African domino.  Gaddafi and his sons are almost certainly on the run, if not overrun already.  The latest images from Tripoli show some local guy playing with Muammar’s hat.  With that in hand, can the owner’s head be far behind?  Meanwhile, this season’s journalists are looking quite jaunty in flak jackets and steel helmets.  I’m waiting for one of the girls to undo her chin strap and go trend setter tres cas, a la John Wayne in The Sands of Iwo Jima.  The sound bytes coming out of the Rixos have a ninth inning World Series feel about them.  They’ve pre-concluded the final score, but are still reporting the game anyway.  Unfortunately, nobody on the business end of a microphone can name any of the players except Muammar and his boys.  This is going to leave a lot of room for error once it’s time to start handing out the trophies.  If I sound a little cynical, it’s merely because I am.

I’ll admit I was wr-wr-wr, not right when I said that the stalemate in Libya would outlast NATO’s patience for battle.  (Frankly, I still think Western Political Will has a 90 day warranty, and after that, you’re on your own.)  However, in my defence Western airpower has more shock and awe than the UN bargained for.  Either that or NATO took my advice from an earlier blog, forgot about Resolution 1973, and started blasting away at hot targets.  Personally, I’m leaning towards door #2 because the t-shirt and running shoe rebels I see on television don’t look like they could put much of a lickin’ on seasoned soldiers.  The fact remains, however, the rebels, whoever they are, are winning, and they’re doing it without overt NATO boots on the ground.

So, why so cynical when the major components of the people’s victory are already whooping it up in Green, Martyrs’ Square? 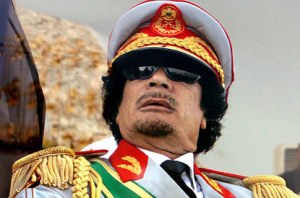 First of all, I have this sneaking suspicion that it’s not over yet.  Muammar is a tricky old bugger.  He didn’t last 40 years plus by folding his tent and fading away every time Western jets came screaming out of the Gulf of Sidra.  And just because some teenagers are playing with his golf cart doesn’t mean he’s going to retire from the game.  Until somebody puts his head on a spike – oops – detains him to face justice under international law – and quickly – there are going to be a lot more dead bodies bleaching out in the desert.

Next, I’m having a lot of trouble figuring out who’s who in the rebel army.

Somehow, I don’t believe the bakers and barbers of Benghazi have the kind of tactical military skill to liberate Libya in less time than it took Erwin Rommel and the Afrika Korps to conquer it.  Nor do I think that your average shopkeeper, under the Gaddafi regime, kept an AK over the mantel, much less enough ammunition for a sustained campaign.  FYI, North Americans, believe it or not, just because you’re an Arab doesn’t mean you instinctively know how to use automatic weapons.  (It’s not in the DNA.)  So just who are these guys and where do they come from?  As a veteran taxpayer, I’d like to know who my million dollar-a-whack bombs are going to support.  What’s their agenda?  And are we just trading an old 20th century dictator for the new and improved 21st century model?

My biggest concern, however, is for when “the tumult and the shouting dies;/The Captains and the Kings depart:” — six months from now.  Unlike Hugo Chavez, I don’t think this is yet another Western plot to seize Third World oil resources and sell them back to ourselves at exorbitant prices.  No.  Basically, the Europeans saw an opportunity to smack a $39.95 dictator who’s been making a fool of them for years, and they took it.  The oil is an extra added attraction.  NATO’s interest in Libya is limited, and I don’t think it includes rebuilding the place, now that we’ve blown it up.

The problem is that, even if the Libyan rebels are the soul of democracy, as we’re being led to believe by the flak jackets at Rixos, they’re going to have a hard time implementing it.  Without a lot more help from the folks who brought them unlimited military aid, the Libyans are in for another bad fight for freedom — that could take years.  Either that, or the West is going to have to pitch in with some ever-unpopular “nation building,” and I don’t think we have the stick-to itness for that.

There is some hope for the future, though.  It’s good to see another one of the nasties, bite the dust and the aspirations of a people overcome the bayonets of a tyrant.  There is hope for democracy in the sands of North Africa — even if it is a long and difficult road.  Besides, if we’re smart, when this is all over (in a month or two?) NATO can stand down, relax and rearm.  Then, we can take a good, long look at Damascus and say, “Okay, Bashar!  Shape up and fly right, or you’re next.  Remember what happened to the last guy who pissed us off!”

In a fortified bunker somewhere in Tripoli, Muammar Gaddafi is saying, “What’s the deal?  I shoot a couple of protesters, who were probably Al Qaeda anyway, and NATO goes berserk.  Meanwhile, over in Syria, Assad’s gunning down civilians like there’s a deposit on them.  What happens?  Nothing!  All Bashar gets is a couple of nasty e-mails from Ban Ki-moon, and he walks away smilin’.  Where’s the justice?  And that’s not all.  In Iran, Ahmadinejad is building a bomb the size of Baltimore.  In Bahrain, Al Khalifa called in the Saudi tanks five minutes after CNN turned its back, and nobody even knows who’s killing who in Yemen – or how many!  So why am I the goalie on the Cruise Missile team?”  Actually, Muammar has a point.  Protecting civilian populations seems to be a selective process at the UN these days.  I’ll grant you, NATO can’t bomb everyone they’d like to, but just exactly what is the UN mandate?  Something is going disastrously wrong in North Africa and the Middle East.  The Arab Spring that started out with such hope in Tunisia is rapidly deteriorating into Chaos Summer. 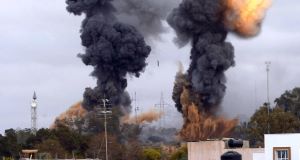 help than they’re getting.  NATO’s been blowing up everything bigger than a Safeway cart for nearly three months now.  Some countries are actually running out of ordinance, for God’s sake.  Yet, all I see on TV are smoke plumes in the distance and some scrubby guys with automatic weapons, firing wildly into the desert.  No offence, but what are they shooting at?  One would think, Gaddafi couldn’t have enough hardware left to defend himself against my nephew’s hockey team.  Not so.  Apparently, Muammar is just as nasty as he always was and about twice as defiant.  Again I ask, what is the UN mandate?

The Canadian commander of the mission, General Charles Bouchard, has called this Libyan adventure “a knife fight in a phone booth.”  I have never been in a knife fight — either in or outside a phone booth — but common sense tells me the object would be to stick the other guy.  Unfortunately, the UN won’t let anybody do that: regime change is not on the table.  I hate to keep asking obvious questions but…  what, then, is the purpose of this Libyan debacle?  Honestly, it’s beginning to look like the only way to get a favourable result is if NATO somehow manages to kill Muammar – accidently.  Pack a lunch, folks: we could be here for a while.

Of course, the unforeseen side effect reality of sixty missions a day in Libya is every other dictator within F-18 distance of Tripoli can do as he damn well pleases.  Bashar al-Assad isn’t really too worried about shooting protesters out of season in Syria when NATO is otherwise engaged.  He knows the Western powers aren’t going to launch anything more than a stern warning in his direction, and he’s acting accordingly.  The same goes for whoever is trying to be in charge in Yemen.  The extra added attraction there is Al Qaeda already has a firm presence.  Fortunately, Ahmadinejad in Iran has his own problems.  He’s just one magic lamp away from getting charged with sorcery or cavorting with genies or some other such madness.  Otherwise, he’d be putting the boots to his dissidents, as well.

What’s happened here is the West has squandered its power to influence events by actually using it.  It has always been the threat of unleashing unlimited Hell that has kept the more petty of the dictators in line.  They knew they could only go so far, dishing out nasties to their own people, before Hillary, Cameron and Sarkozy said enough is enough.  The problem is power is not what you do, necessarily; it’s what you’re willing to do.  If dictator A knows you’re willing to blast him out of his jackboots, he tends to tiptoe.  Once he knows you’re not, he’s kinda got you over a barrel.

Everybody knows that the West can’t disentangle itself from Libya now without looking like jackasses.  If Gaddafi’s still there when NATO goes home, Bashar and the boys aren’t going to worry about the UN, NATO — or anybody else, for that matter.  Syrian dissidents might as well be put on the Endangered Species List.  The best bet is for NATO to forget about UN Resolution 1973 and get rid of Muammar as quickly as possible.  From there, the West could relax and rearm and tell guys like Assad to shape up and fly right — or there’s a good possibility they’re going to get the same treatment as the last guy who pissed us off.  Maybe then the West could start directing traffic again — instead of standing on the curb watching the world go by.