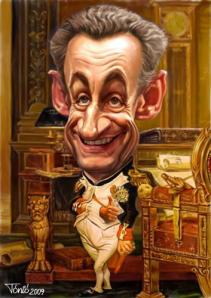 Congratulations, Nicky!  You did it!  There were a couple of times there I didn’t think you’d make it, but you worked long and hard, you stuck to your guns — literally — and in the end, you did it.  Personally, I think you deserve it, so, once again, congratulations.

For those of you who haven’t been watching, let me be the first to inform you that President Nicholas Sarkozy of France is now the Leader of the Western World.  It probably won’t be formally announced for a hundred years or so, but when history gets around to looking at the early 21st century, believe me, it will be confirmed.  Of course, nobody’s really saying anything out loud right now; that would be rude.  After all, the other guy’s still kicking around in Washington; nevertheless, it’s all true.

The story’s almost Shakespearean in its simplicity.  Barack Obama is pretty much everybody’s Hamlet — long on talk and short on action.  While he’s been sitting around the Oval Office, trying to decide which wall to hang his Nobel Prize on, everybody in Congress — from Nancy Pelosi to that cry-baby Boehner — has been kicking sand in his face.  The bills are piling up, nobody’s coming home from

Afghanistan anytime soon, half the citizens in California and Arizona are illegal and the American economy is folding up faster than a cheap lawn chair.

Meanwhile, Nicky Sarkozy’s been scurrying around, doing things.  He’s impetuous and ill-advised and sometimes dead wrong, but at least he’s doing something.  A perfect example of this is the Arab Spring.  Our world is in the midst of a major political upheaval right now, and it’s rippin’ and rollin’ across half a continent.  The American State Department’s response since Christmas has been an emphatic, “Yes, no, maybe so” to everybody who isn’t listening.  That was old when the Egyptians were trying to float Mubarak down the Nile, and it got downright ancient a couple of weeks later when events and unrest overran Libya.   The Europeans need Libyan oil, and they made it plain they weren’t going to sit around forever, wringing their hands, waiting for it.  Besides, most of them wanted a whack at Gaddafi anyway: he’s been a permanent pain in the ass since the 60s.  Unfortunately, without any clear direction from America, they listened to Sarkozy, who stepped into the breach with the simple solution: “Let’s bomb them!”  The French opened fire before the ink was dry on the UN resolution, and here we are.  At this point, nobody knows what’s going on in the desert west of Benghazi — or even if we’re shooting at the right people.  However, everybody does know that the plan was approved in the US by Samantha Powers, Susan Rice and Hillary Clinton, the Weird Sisters of American Foreign Policy.  And it

doesn’t take Lady Macbeth to figure out that these days, if you want something done, you’re just as far ahead to go to Paris as Washington.

Look at the Ivory Coast.  This is how realpolitik works.  After years of international dickin’ around, Sarkozy grabbed the initiative and manipulated a UN Resolution on March 30th, 2011.  This gave French troops (boots on the ground) the legal right (and a UN cover story) to take over the country, get rid of President Laurent Gbagbo and install French-friendly Alassane Ouattara.  They did this in less than three weeks!  There’s a lot of posing for the cameras and high-minded rhetoric, but behind the United Nations are a bunch of tough looking soldiers who aren’t wearing powder blue helmets; they’ve got the French tri-colour patched on their shoulders.  This is the first unpalatable dictator thrown out of office by the Western Democracies since George Bush’s boys dragged Saddam Hussein out of his hole in Tikrit in 2003.

Sarkozy’s leadership in the West isn’t a recent phenomenon, either.  In December, 2008, when President Sarkozy was taking his turn as boss of the European Union, he went out of his way to meet with the Dalai Lama.  This is a move that’s guaranteed to provoke an angry response from the Chinese.  It did, and for a time it even threatened some very serious trade negotiations between China and the entire European Union.

Contrast this to President Obama’s approach to the Dalai Lama.  In July, 2008, during the presidential election, Obama sent him a blow-you-off letter full of regret that Barack’s travel arrangements and campaign schedule dictated they would have to get together another time.  (Oddly, John McCain found a couple of minutes to grab a coffee with His Holiness.)  Then in October, 2009, when the Dalai Lama came to Washington, President Obama discovered some subsequent engagements that prevented him — once again – from meeting with one of the world’s foremost religious leaders.  In actual fact Obama was busy packing for a trip to – you guess it! — China.  The two leaders did finally meet — in February, 2010 — with so little fanfare it looked like the Secret Service shuffled the Dalai Lama into of the White House through the back door.

This stuff goes on and on.  Sarkozy has been diplomatically outgunning Obama for the last two years.

At the end of the day, it isn’t that economic, political and military power is seeping away from America; it isn’t – at least, not yet.  It’s the will to use that power to everybody’s best advantage that has left the White House.  For the last two years, American foreign policy has consisted of “I’m not George Bush.”   That isn’t good enough.  It’s no wonder Nicholas Sarkozy has stepped up to fill the vacuum left by America’s absence from the world stage.