About a month ago, StatsCan released a study that stated categorically only 20% of Canadians were getting enough exercise.  I don’t know how they came up with this figure since I didn’t see anybody peeking in my window or counting the Doritos bags in my garbage, but I’m going to assume it’s true.  It sounds about right.  In the same vein, a couple of days ago, the Society for Exercise Physiology (whoever they are) came out with a study which shows Canadian kids spend about 60% of their time lying around.  Once again, I have no idea how they came up with this figure.  I assume they either asked the kids or watched them, but I suppose it, too, is true.   After all, we’ve been picking on the fat kids since before the time of Moses.  Either way, I doubt if more than 18 people have actually seen these studies, but I’m sure every media outlet between here and Halifax has got the gist of them from the press releases.  At this point, then, it’s only a matter of time before the Society for the Prevention of Ignoring the Obvious issues a statement that says we have got to do something – literally.  The problem is what are we going to do?

The prevailing wisdom is that 20, 30, (100?) years ago, we never had this problem.  Canadian children weren’t tubby because they actually bestirred themselves, once in a while.  Back in the day, kids played games that featured kicking and throwing and running and such.  They walked to school and to other places.  The 4 channel universe was controlled by a dial and a parent.   Hamburgers and soda pop were confined to backyard barbeques, and hanging out with friends involved a lot more than just twitching your thumb. These are all considered good things.  In fact, just about every expert on the subject of childhood chubby agrees that if Canadians just kicked their kids off the sofa, it would be a simple solution to our problem.  Unfortunately, this would involve time travel, and ScienceCanada hasn’t perfected that yet.

Invariably, when we adults do glance over our bulging bellies and take 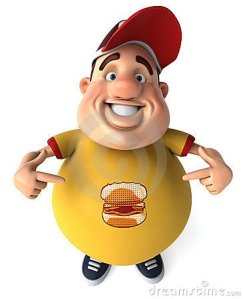 a look at our fat kids, we start reciting from the Book of Nostalgia.  “Why, when I was a child….”  Yeah, yeah, when we were children we didn’t spend all our time, sitting around playing video games.  But here’s a newsflash: Space Invaders was lame.  If you remember, however, we still played it.  Have you seen the video games kids are playing now?  Wow!  It’s the same with Facebook.  When we were kids, we went to the playground (in my case, it was actually a vacant lot.)  We didn’t go there to run around; we went there because that’s where the other kids were.  Games started because we were bored.  (You can only torture insects for so long.)  Today, kids go to Facebook because that’s where the other kids are, and the friendships, jokes, gossip and games are built in.  Like it or don’t, that’s where they play — just like we did.  And there is a 1,000 channel universe out there.  It exists; there’s no sense moaning about it.  Besides, ask anybody over 30 who He-Man was, (or the Care Bears or Danger Mouse) and you’ll get an answer.  People watch TV.  They always have.  Get used to it.  It’s easy for us to casually tell our kids to just unplug their entire world and go out and have some fun, but just exactly where are they supposed to do that, and why?  That place doesn’t exist anymore.  It hasn’t since before they were born.

Yes, we’re getting lardy.  It’s a fact, and our kids don’t stand a chance because our only solution — “turn-back-the-clock” — is stupid.  When we were kids, the world was different.  We can’t expect our children to return to those thrilling days of yesteryear and play Run, Sheep, Run! and Frozen Tag.  First of all, Tag is illegal in half the schoolyards in Canada.  Secondly, they aren’t allowed to go outside by themselves, anyway.  This, of course, is the other problem: our watchdog society demands 24/7 adult supervision – with good reason.  In reality, this means that when our kids actually do want to go outside and play, they have to drag mom or dad with them.  If you recall, one of the reasons we went to the playground in the first place was to get away from the parents and their weirdo rules.  No wonder kids hide themselves behind usernames and passwords, these days;  it’s the only place they can be by themselves.  That’s got to be a major attraction.

We are a sedentary society, and it’s not good for us.  However, if we don’t start looking beyond the Good Old Days as a solution we’re doomed.  We either have to get creative, or just suck in our gut and buy a bigger size.  There is no third choice.

3 thoughts on “Fat Kids and the Lost World”