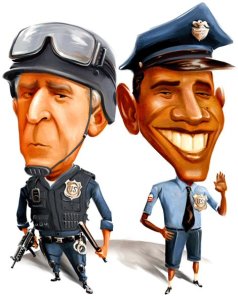 I’ve never seen the movie Dumb and Dumber; I don’t have to.  All I have to do is sit back and watch President Barack Obama and the US State Department stumble around, stomping on the flowers of the Arab Spring, and I’ve pretty well got the storyline.  These guys make the Keystone Kops look like Sherlock Holmes.  Obama’s most recent foray beyond the Beltway, on May 19th, was one of the oddest speeches I’ve ever heard.  Apparently, it was a major policy statement.  Who knew?  From my point of view, Barack Obama’s Middle East policy sounds, looks and acts like a 2011 cut rate rerun of the much despised Bush Doctrine.  To be sure, Obama stuck to his guns and threw in a lot of rhetoric about change, but that was probably just force of habit.  After all, he’s been yipping about change for nearly four years now — without very much of it actually happening.

Anyway, according to Obama, the way America will effect change in the Middle East is by throwing a couple of billion dollars at the Egyptians, starting a civil war in Libya and ignoring Tunisia and Yemen altogether.  Furthermore, if Bashar al-Assad in Syria doesn’t quit shooting people in the streets America is going to get really, really angry.  And, if Ahmadinejad in Iran continues his reckless pursuit of nuclear weapons, Barack will personally denounce him and call on the world to apply more sanctions, more often.  None of this is new or even news.

After that, the speech was padded out with some fancy footwork, dancing around the situation in Bahrain, where, it seems, there 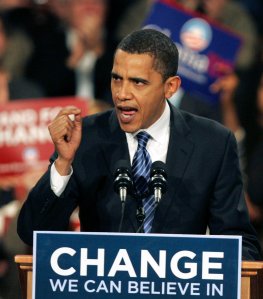 are several different ways to ruthlessly suppress political opposition — and America recognizes all of them.  There were some further admonishments of Iran – like Ali Khamenei cares what Obama thinks – and a friendly wave to the women in the crowd.  However, absolutely glaring by its absence from the Obama Doctrine was any mention of Saudi Arabia and Pakistan.  To be fair, Pakistan is not technically in the Middle East, and perhaps Obama will get around to them later, but Saudi Arabia is smack dab in the middle.  In fact, its importance in the area is what most presidents have called “paramount.”  Talking about the Middle East without talking about Saudi Arabia is like singing the Old Macdonald song without any of the animals: it doesn’t make any sense.  I hate to resort to rhetorical questions but: Is the Kingdom so perfect as to resist the forces of change and self-determination Obama’s talking about?  Or did they just get lost in the desert?   Don’t get me wrong: I don’t mind the realpolitik that says leave the Saudis alone; I just distrust the motivation.  After all, those are Saudi troops in Bahrain.

Of course, Obama saved the best for last – Israel — and the guy was on a roll.  He started off by saying “the status quo is unsustainable” then went on to say “The borders of Israel and Palestine should be based on the 1967 lines…”  I’m 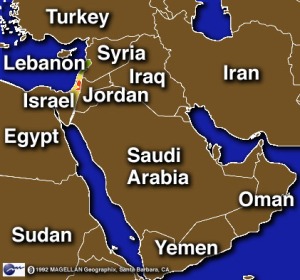 not even going to grace this with an argument.  Obviously, the people in the State Department have never seen a map of the Middle East.  Israel’s pre-1967 borders were indefensible; that’s why they had a war!  Granted, it only lasted six days, but it was pretty memorable.  Who, in their right mind, would think those same borders could be defended any better in 2011?  Wild guess?  Nobody!

The world has changed since 1967.  For example, back then, Elvis was a newlywed, Che Guevara was still alive and a guy by the name of John McCain had just got himself shot down over North Vietnam and was checking in for an extended stay at the Hanoi Hilton.  We were watching Get Smart, The Beverly Hillbillies and Gilligan’s Island on TV and Aretha Franklin was about to record “Respect” – the first time.  Personal computers were unheard of, phones were attached to the wall and most cars got three miles to the gallon.  Hell, we didn’t even have the metric system!  If “the status quo is unsustainable,” how does turning the clock back 44 years help the situation any? 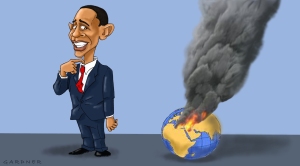 The problem is that it’s not Obama’s fault.  He doesn’t know anything about foreign relations.  Niall Ferguson, a well known British historian, has said — on more than one occasion — that the guy’s clueless.  He’s depending on the State Department to treat him right; this is where you get the dumber part of the equation.  The US State Department has never been the brightest bulb on the Christmas tree, and recently they’ve been spending most of their time unplugged.  This latest adventure in the world of the unknown is just a continuation of the stumble/fumble in the Middle East that started last December.  For example, now that the Egyptians are going to try Mubarak for murder, do you think Gaddafi’s is going to go quietly?  Sometimes I think Hillary’s recruiting her researchers and diplomats at WalMart.

Luckily, Hezbollah and Hamas are still going way too fast on the Crazy Train to let the Palestinians take advantage of the situation.  Nothing is going to happen
for a while, and by that time maybe the American people will quit relying on Hope and Change and take a look around them.  Me?  I’m going to give up
downloading movies and just watch CNN for laughs.