Every country has national legends.  These can be myths like Paul Bunyan or real stories that start out as fact and, over the years, gain a life of their own.  George Washington didn’t chop down his father’s cherry tree, and if he did, he probably blamed it on Billy, the kid next door.  William Tell didn’t actually shoot an apple off his son’s head.  In fact, the facts are sketchy on whether Tell even had a permit to carry a crossbow.  Legends define a country, though; they give it an identity.  They embody the best qualities of a nation and serve as a signpost for young people.

We don’t have a lot of heroes in Canada.  We tend to steer away from hero worship and avoid our own history as if it could give us a rash or something.  Interestingly enough, seven of the top ten Greatest Canadians are part of our living memory, not our historical one.  It’s not that Canadians don’t like history; we just aren’t interested in our own.  When we go looking for heroes, Terry Fox trumps Laura Secord and Tommy Douglas trumps Thomas Darcy Magee — for good and sufficient reason.  There are tons of Canadians who’ve never heard of Laura and Darcy.  Plus, Canadians, like Americans, have all kinds of misconceptions about our country.  For example, Gideon Sundback, the guy who invented the zipper, wasn’t Canadian.  He was born in Sweden and lived in the United States.  The factory was in Canada – in St Catherines.  But here are few things that are true and may give you an insight into our national character.

Canada is one of the few nations in all of history that has never fought a war for territorial gain.  Historically, when we fight (and fight hard) it’s for human principles, possessing other people’s dirt doesn’t interest us; we prefer to wage war for ideals.

Toronto, the town we love to hate, is the most educated place in the world.  There are more university degrees in Tee-Oh than in any other major city on the planet.  (It makes you wonder where all the Maple Leafs fans come from, but it is what it is.)

Up until February 15th, 1965, Canada did not have a national flag.  Nobody felt the need for one.  On state occasions, when all the other kids were hoisting their flags, we borrowed the Red Ensign.  However it was never our official anything.

Contrary to popular belief among foreigners, our national symbol is not a Tim Horton’s coffee cup.  It’s the beaver, who is probably smarter than the British lion, the Russian bear and the US eagle combined.  As the world’s only official rodent, castor canadensis embodies all that is Canadian: hard work, diligence and a genius for reshaping a harsh environment to everybody’s benefit. 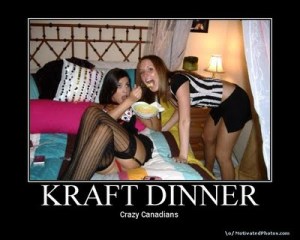 world.  And that’s not per capita, folks; that’s straight up-and-down bulk.  Therefore, at any given time in Canada, chances are good that somebody, somewhere is eating Kraft Dinner or a reasonable facsimile.

Canada has the longest coastline in the world – 243,000 km or 151,000 miles.  There’s nothing significant about it.  We just got lucky with Hudson’s Bay and all those northern islands.  However, trivia lists all point it out like it’s something we’ve accomplished.  Hurrah, Canada!  Standard time, the Canadarm and coastlines!  Woohoo!  We’re Number One.

The Canadian comedy team Wayne and Shuster were on the old The Ed Sullivan Show more times than any other act.  They made sixty-seven appearances, an American media record which still stands and is not likely to be broken any time soon.  Americans like Canadian comedy.

Long ago, Canadians discovered insulin.  Recently, we captured the incredible energy source, antimatter, for a record 16 minutes and the other day we may have found a cure for Hepatitis C.

There is a story that goes like this.  When the Nazis overran the Netherlands in World War II, the Dutch royal family fled to Canada to escape capture and ensure the continuation of the royal line.  During their exile, Princess Juliana became pregnant.  The child, who would be 4th in line to the Dutch throne, could not be born in a foreign country.  The Canadian government issued a proclamation declaring that Princess Juliana’s hospital room was extraterritorial so the new princess would not have dual citizenship.  It was a wonderful gesture between two embattled nations, and it’s remembered every year during Ottawa’s tulip festival – tulips originally given by a grateful Dutch monarch.

When I was very young and the old guys had a few too many adult beverages, I heard a different story.  It was about a group of Canadian soldiers who slipped across the English Channel one dark winter night in 1942.  It was the middle of World War II, and Nazi military strength and the occupation of Europe were at their height.  Canadians had raided Hitler’s Europe once before, at Dieppe in August.  They suffered over 3,000 casualties, nearly half their contingent.  However, the little Canadian boat sailed on through the night, avoiding German submarines and patrols and ducking under the primitive radar.  It anchored quietly in the pitch black, off the coast of Holland.  The Canadian soldiers left the ship and rowed ashore.  They went inland a few hundred yards to get off the sand.  Half of them stood guard and the other half dug up enough Dutch dirt to fill a couple of burlap bags.  They carried them away and rowed back to the ship in total darkness.  When they were loaded, the ship turned and ran for England.  The bags were transferred to a Canadian Navy corvette which sailed, as a convoy escort, back to Canada.  They were given to the Dutch royal family and the dirt was carefully placed under the four legs of Princess Juliana’s hospital bed.  Princess Margreit, Juliana’s third child, was born on Dutch soil.

I don’t know whether my story’s true but it’s the stuff legends are made of.