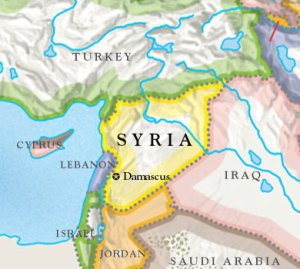 I think if I were a Syrian, I’d be looking around for some new friends.  This current crowd just isn’t measuring up in the amigo department.  After all, if your BFF is Iran, it doesn’t take a PHD in WTF to figure out you’re in trouble.  Meanwhile, when two superpowers (one past, one future) are playing nice with you and nasty with the UN, I’d be counting the silverware.  No accusations, but the last time the Russians went all warm and fuzzy in the Middle East, Gamal Nasser was building the Aswan dam.  And China’s newfound foreign muscle needs no introduction.  Something’s rotten in Damascus.  I’m not sure what it is, but I’ll bet Syrian pounds to a pile of camel poop it’s not going to go well for the average guy on that Arab street.

Despite what most second tier Western diplomats will tell you, Syria is not on the top of anybody’s talking list right now.  Even the big boys at the Tunis conference over the weekend didn’t have much to say.  Of course, they made all the right noises: condemning the killing, promising aid and other such vagueries, but I imagine the afterhours parties were long on nuclear Iran and short on dead dissidents.  It’s not that Syria isn’t sexy; what’s not to like about democracy going toe to toe with a ruthless dictator?  Besides, it might only be Homs, but even the French have heard of the Alamo.  The problem is deeper than that.

Just a little background.  Less than a year ago, Sarkozy and his buddies couldn’t 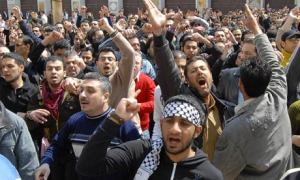 gas up the F-18s fast enough to go and knock the snot out of Muammar Gaddafi.  They put on a textbook (limited) military campaign that surprised everybody, including me and Muammar.  Now, another flowering of Arab Spring is raising its lovely head north of Damascus, but the day before yesterday, those same eager beavers, forgot where they put the launch keys.  What gives?  I’ll grant you, some of the hurtin’ they put on Gaddafi was payback for being a forty-year-on pain in the ass, but, in general, Western motivations in Libya were honest.  Yeah, yeah, yeah; “Blood for Oil.”  But I’ll let you in on a little secret: that Mad Men slogan is just another clever way to sell bumper stickers.  I’m not naive enough to think Libyan oil wasn’t an issue, but for all those who still believe in Santa Claus and the Great Satan, they both get their oil from Canada and the Saudis.  The difference is Muammar didn’t have any friends left at the end, whereas Basher al-Assad still does — and they’re walking with a swagger these days.

Remember when you where in high school and there was that nasty kid most people avoided?   The one who thought it was funny to hold the washroom door closed or spray Coke™ on the back of your head?  The guy whose face still says, “Oh, yeah!  Him.” in the Yearbook.  Then there were those rowdy kids who had their lockers at the end of the hall, the ones the Glee Club and the cheerleader crowd stayed away from.  They weren’t really hardcore but nobody messed with them ‘cause they had a bad reputation, kinda like Kenickie and Rizzo from Grease.  Well, if the world were just a great big high school (and I’m not saying it isn’t) Syria is that nasty kid.   But instead of being a jerk all by himself, he decided to suck up to the rough bunch down the hall.  He doesn’t really belong to that group, but they don’t mind him hanging around.  In a nutshell, Syria thinks it can get away with all kinds of idiot antics because it has some tough friends.

Unfortunately, Bashar and his crew have forgotten the one essential element of friendship in the world of international relations: what do you bring to the table?  It’s obvious.  They don’t bring a lot.  In the great scheme of things, Syria is pretty much a backwater and has been — ever since the Mongols burned it down in the 13th century.  Its only claim to fame is the mess they’ve made of Lebanon and the always ill-tempered Hezbollah, both of whom are putting some distance between themselves and Damascus.  Right now, China and Russia don’t mind that Syria is a thorn in the foot of the Western world.  It suits them.  However, that’s going to change.  Eventually, Bashar’s going to be more trouble than he’s worth.  When that happens, Syria will have even less to offer a burgeoning Asian Superpower, and I doubt very much that Vladimir Putin ever got any awards for being a nice guy.  Bashar’s cling to power has a limited shelf life.  Regardless of who he thinks his friends are, he’s not going to last anywhere near the Presidential term yesterday’s farce referendum gave him.  When the proverbial ship hits the sand even his best buddy, Ahmadinejad, who has a few problems of his own, is going to make himself scarce.

The problem is, it isn’t Bashar who’s going to pay the price.  (Although a show trail a la Hosni Mubarak would be nice.)  It’ll be the ordinary Syrian, who doesn’t really know who his friends are anymore.