One of the main reasons people have so many problems these days is no matter how contemporary we try to be, we have never given up our tribal, them-and-us, way of thinking.  It isn’t a revelation that people think in pairs; we’re built that way.  We have two hands, two feet, two eyes etc. etc., so it’s only natural that we organize our world along the same lines.  It’s that eternal balance in nature that the Greek philosophers discovered (while their slaves were doing all the work) and scruffy-bearded bores have been droning on about ever since.  What started out as primitive left and right simply translated itself into everything else — hot and cold, wet and dry, etc. etc.  From there, it wasn’t a major leap to less tangible things like smart and stupid or right and wrong.  We might intellectually recognize all kinds of nuances in things like wet and dry (damp, for example) but when it comes down to straight analysis, inside our heads, there are no shades of grey.  The best we can do is black, blacker and white, whiter.  Of course, we mouth all kinds of platitudes about inclusivity and nonlinear thinking, but that’s merely for public consumption.  Unless your name is Leonardo da Vinci, you paint the world with only two brushes.

Here’s how it works.  When we think, we can only hold two complete ideas in our head at the same time.  It’s the natural pairing of things, – Bert and Ernie, Hansel and Gretel, Bogie and Bacall.  Once we step outside this comfort zone, we get confused.  It’s something I like to call “The Other Guy Phenomenon.”  When 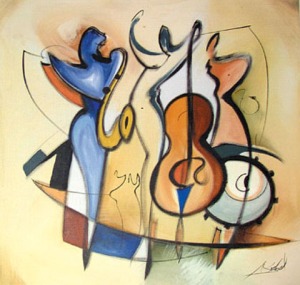 we are faced with more than two items, the third one gets a little hazy in our minds.  For example, Apollo 11 was America’s first manned space mission to land on the moon.  This was one of the major events in all human history.  Everybody knows there were three men involved; Neil Armstrong, Edwin “Buzz” Aldrin and … wait a minute… who was that other guy?  (FYI it was Michael Collins, but see what I mean.)  Likewise, remember The Three Tenors?  Placido Domingo, Luciano Pavarotti and – uh — the other guy.  (He was Jose Carreras, by the way.)  How about the Bronte Sisters?  There are Charlotte, who wrote Jane Eyre; Emily, who wrote Wuthering Heights and … and…  Her name was Anne and she wrote The Tenant of Wildfell Hall, a novel that not even sophomores study anymore.  Or there are always The Three Musketeers?  Unless you’re a total Alexandre Dumas fan, you remember them the way everybody else does: Athos, Porthos and D’Artagnan.  But, that’s not right; D’Artagnan wasn’t a Musketeer.  The third Musketeer was actually Aramis.  What happens is our minds hold the natural pair together and kinda hope for the best on whatever’s tagging along.  In the case of the Musketeers, we even make a substitution when we can’t quite remember!  Yes, I know there are The Three Stooges; Snap, Crackle and Pop; and bacon, lettuce and tomato.  But if you think about it, we treat these trios as if they were one item.  A BLT is a sandwich; Snap, Crackle and Pop are Rice Krispies; and The Three Stooges weren’t funny the first time.

My point is that we think in terms of pairs, whether they be strikingly similar or diametrically opposed.  It’s cultural memory from the dark tips of time.  In the beginning, there was us, the cave people we knew, and there was them, the ones we didn’t.  We were the good guys because we were us, and they were the bad guys because it pays to be careful with strangers.  For several millennia, there was no third choice, so we never adapted to one.  Now, in the 21st century, when we need to make a judgement call, we revert to that natural pairing because anything else is just some cloudy, vague option.  Of course, nobody admits to it because, after all, it is Neanderthal thinking.  However, like it or not, we live in a world of peanut butter and jelly, Starsky and Hutch and who was the third Bee Gee, anyway?