The last horror movie I paid money to see was The Exorcist in 19 [mumble, mumble.]  It’s a good movie, but I was old enough to know better.  Since then, I’ve lived a full and rewarding life without ever again shelling out coin for cheap adrenaline thrills.  Actually, I’ve had the hell scared out of me for real a couple of times, and I’m in no great hurry to have those feelings artificially induced.  Besides, contemporary horror movies are totally unimaginative.  For the most part, they’re just a series of heart-shocking surprises, stuck together with literal bursts of exaggerated gore.   Let me show you how it’s done.  Here’s a simple three part program that will help you write your own horror movie, and depending on how ambitious you are, take you to the very gates of Horror Movie Heaven: The Slasher Franchise.

First of all, horror movies are driven by the vivid portrayal of a single requisite character: the half dressed young woman.  She is as essential to the horror movie as the horse is to the Western.  If you don’t have at least one girl falling out of what’s left of her clothes, you simply don’t have a horror movie.  Ideally, you need one Alpha female and a couple of expendable best friends who get butchered early, to prove the villain/monster/psycho is serious, but strangers will do.  Actually, the best friends don’t even need names; all they have to do is scream.

From there, you need a boyfriend (he can be a husband as long as he’s newly minted.)  The boyfriend/husband is the catalyst that causes all the problems in the first place.  He’s the guy who ignores everybody’s advice to get the hell out of there and convinces them all to hang around and get murdered.   He comes with his own set of friends, usually a larger, stronger man and an idiot.  The larger, stronger guy gets hacked up later on to prove the villain/monster/psycho can’t be stopped, and the idiot is there for comic relief.  (Nothing much ever happens to him.)  Likewise, the boyfriend, is normally never killed, although he can be badly hurt (and usually is.)  He’s kind of a handsome Wile E. Coyote type who always survives his dumbass schemes to defend himself and the half dressed female.

Secondly, you need to drop everybody’s IQ by about 25%.  Once again, this is a 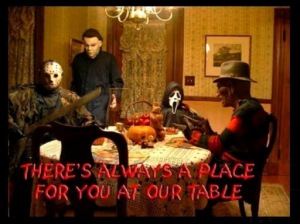 fundamental feature of the horror movie.  The future victims have got to be dumb as a box of hammers and take an active part in their own demise.  For example, when confronted by a dark, rambling mansion or a deserted campsite or what-have-you, the first thing horror movie characters do is the stupidest thing possible: they split up and go exploring.  Together, they could probably protect themselves properly and possibly even beat the villain/monster/psycho bloody; individually, they’re just candidates for a toe tag.  Nor do they ever arm themselves with anything more than a toothbrush.  The villain/monster/psycho has any number of ingenious weapons available to him, but these clowns never even think to pick up a rock.  There is a willing suspension of disbelief in the movies, but the future corpses of horror must defy all reasonable thought.  Never let them grab a garden tool, pick up a kitchen knife or — heaven forbid — in a country as gun crazy as America, carry a pistol.  Also, they must run headlong down blind alleys; wander aimlessly down dark, creaky hallways and never — under any circumstances — turn on the lights.  In short, they should all be stupid enough to get outwitted by sheep.

Third, and least importantly, you need a villain/monster/psycho.  Actually it really doesn’t matter who or what this guy is.  He just needs a steady supply of sharp and/or pointy things to jab into people until they gush for the camera.  Simply remember not to kill him off at the end of the movie — in case the studio wants to pick up an option on Freddy Jason Myers, Part II.

Of course, there are all kinds of things you don’t want cluttering up your movie like plot, character development or dialogue, but those are just tricks of the trade you can learn to suppress as you go along.  Actually, for a quick shortcut to horror movie heaven just get some old Archie Comics, piece together a few of their adventures, add a villain/monster/psycho to massacre a few of them, and you’ve got it made.  Good luck!