I’m not one to grouse about First World Problems.  Yeah, my hand doesn’t fit in the Pringles™ container, it’s hard to find Levis™ that fit and once, they were out of arugula at my Organic Fifty-Mile Food Emporium.  However, I seldom complain about such setbacks.  It’s all part of the game, as far as I concerned.  Actually, I’m usually on the other side of the fence.  For my money, our society is full of overfed, over-medicated, bone-lazy malcontents, constantly whining about stuff that doesn’t matter.  In a more civilized time, they’d have gone under in the first pillage, and stray dogs would be licking their bones.  However, there are a few things in our world that do burn my bacon, and one of them is coffee.

Strictly speaking, coffee is not essential to our well-being.  I know several people who never touch the stuff.  Nor is it scarce.  It grows abundantly all over the world, and you can find it in just about every grocery store.  In fact, like oil and cocaine, coffee is one of the most widely traded commodities on the planet.  However (and this is what burns me) unlike every other product humans use, abuse or devour, coffee simply refuses to obey the basic rules of economic supply and demand.  Let me explain.

Day-to-day, coffee is so cheap that I have no idea what it costs.  I don’t keep track.  I know that, in any grocery store in all directions, I can haul out five bucks and buy enough regular grind to keep me awake for at least a week — so I don’t worry about it.  Sometimes, it’s on sale; sometimes it isn’t, but, like bad Spielberg movies, it’s always going to be there.  That’s one side of the coin.

On the other side, if I walk less than 500 metres from the coffee aisle of my favourite food store into the mall, I run into what can only be described as Coffee Bean Buccaneers.  These 21st century pirates are selling coffee by the cup as if it were the Treasure of the Sierra Madres.  Kiss your five bucks goodbye because that doesn’t even get you a place in line and, oh yeah, you’re going to stand in line.  I have yet to go to a Starbucks, Hortons, Blenz, et al and escape in less than twenty minutes.  Why? Because, these days, everybody from Maine to Malibu is on a 24/7 caffeine bender.

People are lining up, three deep, to get their mitts on a couple of hundred mls. of Kona Soft Blonde or Kenyatta Cool Corona or some other such exotic nonsense.  But it`s not like coffee`s cheap or even on sale.  In the same time period it took cell phones to go from over $800.00 to Here-Take-One-They’re-Free, coffee has gagoopulied in price.  What was once a fifty cent all-you-can-drink morning beverage has become a $9.95 that’s-all-you-get experience.  And the weird thing is, people are getting it poured into a paper cup and they`re walking away with it – happy as a penguin with a fresh fish.  You would think that if you’d just paid a Lindbergh ransom for a beverage that was brewed from handpicked beans, slow roasted over a sustainable rosewood fire and pulverized by union-scale Gregorian monks, you`d want to sit and savour it.  Apparently not, because t 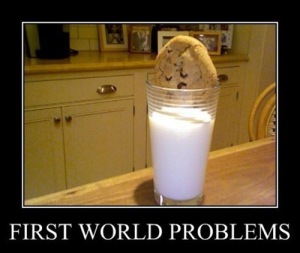 he world is full of people charging around, clinging to their paper cups as if they were carrying the relics of the saints — with two sugars and one cream.  They`re everywhere!  You can`t turn around without seeing somebody with a cup in their hand.  A person might need a coffee on the bus if they got up late that particular morning, but who needs a coffee at the podiatrist – at 2 in the afternoon, for god`s sake?

I don`t mind ponying up the bucks for a specialty item.  However, I can assure you that the difference between what some people are calling Medium Roast Jamaican El Negra Java, for example, and Good-To-The-Last-Drop Maxwell House is minimal– especially after the selected serving has been drowned in steamed milk, sprayed with born-in-the-bottle whipped cream and covered in cinnamon-flavoured sprinkles.  It’s coffee, folks!  There`re only so many things you can do to it.

Our current coffee cult might be just another First World Problem, but I’m telling you the entire industry is living proof that P.T. Barnum was right.