Even though they never taught us this in school, one of the problems with history is it’s messy.  Timelines tend to overlap, the good guys and the bad guys change sides with surprising regularity, and pivotal events are far more complicated than the “name five causes of” exam questions we grew up with.  As I recall, Mr. Barnaby (not his real name) from Social Studies 12, droned on about The Industrial Revolution as if it started one Tuesday morning after James Watt invented the steam engine.  It abruptly disappeared when an unruly mob of starving peasants got fed up with Marie Antoinette’s “let them eat cake” attitude, tore down the Bastille and started the French Revolution.  That somehow morphed into a Reign of Terror, which ended only when Napoleon showed up and started a bunch of wars.  Oddly enough, all these events took place before Christmas and Barnaby’s musings on the American Revolution — which had nothing to do with the Industrial Revolution (because we studied that last term.)  I said all that to say that, when we’re looking at recent events in Egypt, we must use as our template real history, not the made-up variety we were taught in high school.

Real history shows us that long before Imhotep the Builder decided his Pharaoh needed a stairway to heaven, Egypt was ruled by dictators.  Stick a pin anywhere in the timeline and you’ll find (in various degrees of ruthlessness) Pharaohs, some foreign pharaoh wannabes, an assortment of kings and khedives, the British, and a string of military strongmen.  That’s five or six thousand years without a lick of liberal democracy.  That all changed, however, a little over two years ago, when, during the still misunderstood Arab Spring, the people of Egypt told their latest tyrant, Hosni Mubarak, to clean out his desk.  In was a great victory for democracy, and Mubarak wasn’t even in handcuffs before the interim government set up free elections.  Unfortunately, after a thousand generations of getting stepped on by jackboots, few, if any, Egyptians, outside a cadre of academics, had the faintest idea what that meant.  More importantly, since the first thing they teach you in ruthless dictator school is how to silence the opposition, once Mubarak was gone, the political vacuum he left behind looked like a Black Hole.  In fact, the only organization on the ground between Alexandria and Aswan was The Moslem Brotherhood.  These are the boys (girls aren’t allowed) who think the Iranians are doing a bang up job in the Islamic Republic business.  In the ensuing election, The Moslem Brotherhood slid easily into power and took the vote count as a mandate for their point of view.  And that’s the problem.

In real life — unlike in Mr. Barnaby’s Socials 12 class — not all revolutions are created equal, nor do they occupy an easily 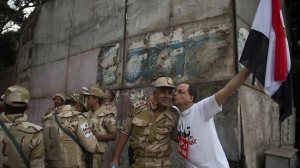 Egypt’s revolution was never about republican ideals, Islamic or otherwise.  It was about economic stability.  Those people who came to Tahrir Square in 2011 may have chanted democratic slogans, but their priorities were closer to home — jobs and affordable prices.  Two years later, that hasn’t changed.  In fact, if anything, the need has gotten worse.  Since the revolution, the tourist industry has collapsed – and, with it, most of the rest of the economy.  Food and fuel prices are in the stratosphere.  (Remember, Egypt does not have vast oil reserves like its neighbours.)  Unemployment is officially listed at around 14%; unofficially, it’s much, much higher.  Young people are hearing long-winded discussions about democratic ideals as their economic future dissolves into the Nile.  Ballot boxes are no damn good without bread on the table.  So they went back into the streets – in their millions — to try and get it right this time.

Unfortunately, the results were predictable: two accelerating political bodies, playing chicken, with Egypt in the middle.  The only national institution with any credibility left, the military, stepped up and told the politicos to fix it or face the consequences.  Defiant in the face of overwhelming opposition, Mohamed Morsi and the Moslem Brotherhood refused — and the rest is history.  Not that neatly-packaged history you learned in high school but real blood-under-the-fingernails history that is happening all around us.

They may occupy only a single chapter in Mr. Barnaby’s textbook, but the French Revolution took 80 years — and two Napoleons — to resolve itself.  The same was true in the United States where the great-grandchildren of Washington, Jefferson and Adams had to fight a Civil War to finally settle their political differences over the cornerstone of the American Revolution, the Constitution.  And the Russians never did get their revolution right, stumbling along for 75 years until the whole thing just collapsed under its own weight in 1991.

Tearing a society apart is easy; putting it back together again is hard work.  Two years is no big deal to the infinite march of history.  So, despite what the pundits might tell you, the Egypt revolution isn’t over.  It’s only just begun.

2 thoughts on “Only History Will Judge the Egyptian Revolution”