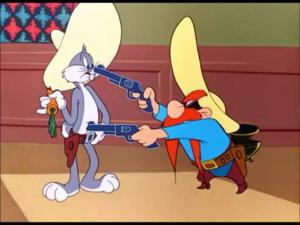 As Bugs Bunny once said to Yosemite Sam, “Of course, you know this means war.”  Yeah, I’m talking about the comic book opera being played out between London, Washington, Congress and Damascus.  Don’t get me wrong. I’m the first guy in line to see a smartass like al-Assad get slapped.  However, let’s put things into perspective: there isn’t a schoolboy alive who hasn’t seen this playground scenario a hundred times.  Some kid thinks he can get away with murder (in this case, literally) and some other kid says, “No, you can’t.”  Good luck trying to talk that one out over a juice box.

But I’m also declaring war on all those wishful thinkers out there who wouldn’t recognize reality if it dropped an Acme anvil on their heads.  Get the message, you wily coyotes: the hard truth is, you’re never going to catch the roadrunner and bullies exist.  They’ve been living on our planet since Fred Flintstone had to defend himself against the Neanderthal hillbillies, two caves over, who kept stealing his fire and peeing in the water supply.  From that primeval moment until the present day, human history has been a running battle between those of us who want to be left alone to grunt and scratch as we see fit and a bunch of scuzzy buggers who never seem to see it that way.  Wake up and smell the Sarin, people!  Bashar al Assad is one of those guys who thinks the rules don’t apply to him.  We all know these folks; we’ve met them a million times.  He and his Ba’ath Party buddies are simply pumped-up versions of those morons from grade school who got their kicks beating up the little kids.  They’re bullies, and no amount of pink shirts is going to change that.

However, it’s not actually the bullies of our world who are the problem.  They’re easy to spot: just follow the blood stains.  Our real problem is those misguided Good Samaritans who are controlling the agenda.  They are somehow under the delusion that we’re just one honest dialogue away from a political solution with Bashar and his ilk.  They are convinced that reasonable people can reason with a guy nasty enough to spray paint an unsuspecting population with poison gas.  It boggles the mind.  Unfortunately, these pie-in-the-sky debaters are part of the problem not the solution.  And, let’s be clear, this isn’t just the Barack Obama’s Sylvester and Tweety Show.  I’m looking at you venerable Parliament of the UK.  Remember what happened the last time the British decided not to take action over “… a quarrel in a far away country between people of whom we know nothing.”  You Brits ought to be ashamed of yourselves.  My point is, as we theorize and chatter about who did what to whom and how many dictators can dance on the head of a bloated corpse, the bad guys are taking time to reread their ruthless manual and reload.  Then, when, invariably, push comes to shove in Syria, it’s going to take twice as much time, three times as much energy, and four times the body count to finally get rid of these clowns.  Regime change on the ten year plan isn’t pretty; just ask the marines in Afghanistan.

The fact is, the Pollyannas of our time, and their abhorrence of history are condemning our children and/or our grandchildren to eventually die in that same “far away country.”  Their abject ignorance is just as deadly as al-Assad’s poison gas.  Therefore, let it be known, that I, for one, am no longer willing to let you off the hook just because you’re dumber than the average bear.  After all, Yogi never got it right even when Boo Boo pointed it out to him.  So, get out of the way, or, as the man said, I will “Cry havoc and loose the Huckleberry Hounds of war.”