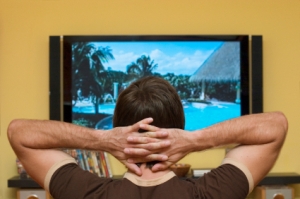 I’ve been watching TV off and on (I didn’t have a television machine for a decade or so in the middle) since the days when Lucy had “some ‘splaining to do” and father knew best.  However, recently I’ve discovered an interesting phenomenon – the ads know what you’re doing.  Somehow that wireless cable you’ve connected to, is connected to a modern day Mad Man, who, like Santa Claus and the NSA, is keeping track of what you’re up to.  It’s nothing sinister but you might want to keep you clothes on.  Let me demonstrate.

You’re watching the ball game (any ball game) and your team has just made a ___________ (fill in the blank) to tie the score with 2 minutes left in the bottom of the ninth.  You can literally taste the testosterone you’re percolating, and the next voice you hear is Denis Leary or Sam Elliott telling you to buy what looks like an armoured personnel carrier.  This machine eats regular trucks.  It tows ten story buildings.  It’s Knightrider black with a massive faux chrome grill that would make Katy Perry jealous.  It drives over mountains, through ecologically sensitive salmon spawning streams, up the sides of buildings.  It gets thirty yards to the gallon, uses liquid oxygen high octane fuel and needs two NASA technicians just to start it, but, who cares ‘cause you’re fist punching the living room and screaming, “Hell, yeah!  I need one of those.”  And the only thing that saves you from buying it right then and there is it costs 8 million dollars and Craig’s List rejects your Visa card.

The same thing happens late at night with sad movies.  You’re watching, They Came to Cry, the one about Eddie, the plucky non-profit vegetarian butcher who’s dying of E. Coli.  You just get to the part where his girlfriend Gwen is crawling out of the gutter after she’s been robbed by her no-good brother’s friends.  She pulls out her handkerchief to soak up the last of the antidote she spilled trying to protect herself, and suddenly there’s this dirty little kid looking at you.  A couple of flies land on his forehead, a voice says, “This is Lanzuca.  He’s eight years old.  He wants to go to school but his mother has Aids” and you burst into tears.  And you realize you’re not crying because Eddie might die or Gwen’s got a no-good brother or even because Lanzuca has to rob tourists to feed his family.  No, you’re sobbing away because it’s 1:30 in the morning, you had KFC for dinner — again, you’re going to be 36 next month and you’re watching They Came to Cry for the third time … ALONE.  So, you kinda blow your nose and, between Kleenexes, you call the 1-800 number and give them enough money to feed Manhattan because now it’s two o’clock and the only person who’s ever coming to your funeral is your high school football coach.

However, the best one, the very best one, is when you’re watching … whatever.  You get hungry and order the deep-dish 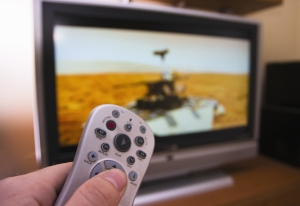 extra meat-lover’s Mucho Grande delivered in 30 minutes pizza.  You devour everything but the last slice like you’re a member of the Donner party, wash it down with the free two litre Pepsi, and now, surrounded by crumbs and crusts, you have to burp.  Unfortunately, it’s lying down there like a submerged bathysphere, and you’re scared to force it in case you pull a muscle.  At this point, regardless of whatever else is on TV, who shows up on every channel of the million channel universe? Mr. Bowflex and his pint-sized uber-wench girlfriend, Bicepual.  He smiles and says, “I used to look like this.” and, holy crap, it’s a black and white picture of you (with one less chin.)  “But, since I’ve got the Bowflex Semi-Pro Muscle Snapper II, I look like this.”  Then he pulls off his shirt and the guy looks like he was carved out of soap.  Seriously, if you’re that shiny you don’t need a Bowflex; you need a doctor.  “Just thirty minutes, three times a week and the girls’ll be on you like ugly on an ape.”  And out of nowhere, our boy’s surrounded by 72 virgin bikinis.  Not to be outdone, the camera pans back to Bicepual and she’s lifting weights like they’re stuff with marshmallows.  “I used to hate the beach” and the camera cuts to what is clearly a Shetland pony (bad hair and no eyes) in a black one piece bathing suit, “but now I don’t care if people are looking at me.”  And there she is in a thong, playing beach volleyball with one of the Meangirls’ heads.  She’s looking absolute fine but you’re not even thinking about it because you know, deep in your soul, in an unguarded moment of passion, a woman like that could kill a guy like you.  Meanwhile, soap sculpture is back on stage, striding around as if he were God’s gift to muscles, telling you just how easy everything is.  But, that doesn’t matter, because even though you know that there’s no way you and Bicepual are ever going to hook up, even in Fantasyland, you’ve already decided on the 72 bikini virgins.  So, you search through the cushions on the sofa, find your phone and your wallet and buy the thing, sight unseen, including another $199.95 for express shipping and a $99.00 service charge for convenient monthly payments.  The thing shows up a week and a half later, when you’ve already forgotten about it.  You and two friends haul it upstairs and, for the next four years, it sits, half assembled, in the corner of your bedroom until you finally move out of that apartment and just leave the bastard thing for the next guy.

Always be careful with advertising.  It can get you when you least expect it.

One thought on “Advertising: It’s All About Timing”