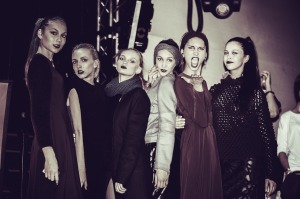 Paris Fashion Week is two weeks over and the supermodels have scattered to the various All-You-Can-Eat breadstick bistros to fuel up for the next round — so it’s safe to ask a few rhetorical questions.

When did fashion models get so angry?
Back in the day, models were pouty, sulky, sullen and even vague (who wouldn’t be, on a diet of coffee and cigarettes?) and we liked them that way.  Oddly enough, disinterested crack addict used to be considered sexy.  These days, they all look like they’re grinding their teeth and just praying for an opportunity to jump down off the runway and kick the bejesus out of somebody.  They’re like a really skinny motorcycle gang.  The last time the world saw this much pent-up hostility, Hitler invaded Poland.

Who wears those clothes?
I’m not talking about size nothing VS real women of the world — unrealistic body image expectations have been done to death.  I’m talking about a woman’s inalienable right to sit down.  Harnessed into some of that industrial-strength crap, it’s a wonder they can even blink their eyes.

Is there something schizophrenically wrong with a society which is totally obsessed with breasts but demands its professional clotheshorses don’t have any?
No doubt, and there’s probably years of therapy involved in there somewhere.

Why is Haute Couture synonymous with hideous?
I’m from an age when Oscar, Yves and Coco actually liked women.  They made clothes for them that looked nice, that fit, and, for the most part, were wearable to weddings, funerals, birthdays and other social occasions.  I have no idea where or when women actually wear the rag bags they’re sewing up these days.  Exorcisms?  Barbie has a better wardrobe, for God’s sake!

Why are fashion commentators so damn bitchy? [Oops!]
It was Richard Blackwell and his Worst Dressed List that started this trend sometime in the last century, and Joan Rivers turned it into an art form.  They both made mountains of money and now everybody’s doing it.  But it’s been more than 50 years, folks.  Could we move on?

And finally, why does a heterosexual, grey haired old guy like me even care?
Gimme a break! Fashion Week is fun.

2 thoughts on “Fashion: What The Hell Happened?”