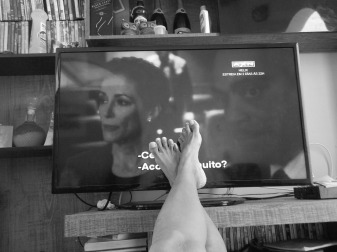 Forget the Stone Age, the Bronze Age, The Age of Enlightenment, The Space Age and even The Post-Industrial Age: all human history can be divided into two distinct periods — The Age of Work and the Age of Leisure.  Our great-great-great-grandparents lived in the Age of Work; we live in The Age of Leisure.  And that, in a nutshell, is why Western Society is speeding towards the Abyss of Hell like a runaway stagecoach full of passengers shouting “WTF happened?”

Give or take a day or two, human history is really only about 40,000 years long.  (Before that, it’s kinda iffy — unless you’re specifically trained to spot the difference between a stone used as an axe and an axe made out of a stone.  Even mega-smart anthropologists argue about that one.)  Anyway, for the first 39,750 years of understandable history humans worked … dawn to dusk, every day … like … endlessly.  That’s what they did and they did it because there was only one alternative.  Oops, sorry: you’re dead.  They had a purpose — work your ass off and improve your lot in life, or face the alternative.  Things was simple in those days.

Then, about 250 years ago, a guy by the name of James Watt showed up.  History tells us that Watt invented the steam engine.  (He didn’t actually, but that’s a different tale.)  What history doesn’t tell us is that Watt, by setting off the Industrial Revolution, inadvertently created leisure.

There are all kinds of myths about the brutality of the Industrial Revolution, but the reality is machines started doing our work for us.  People, therefore, didn’t have to spend all their waking hours just trying to survive anymore.  They started doing other things — leisure activities.  (It’s no coincidence that book, magazine and newspaper sales went through the stratosphere in the 19th century.)  Slowly at first, but steadily, leisure (an unknown term before 1836) became an essential component of our modern world.  But now — in the 21st century — it has turned into a monster.

We spend millions on young people who kick, hit and throw a variety of balls around — and billions more to watch them do it.  We spend millions on people who sing to us, tells us stories or tell us what to wear.  We spend so much money on the film industry and spend so much time watching television that even Stephen Hawking can’t imagine the numbers.  We have created celebrities who literally have no redeeming qualities; they just exist, and we worship them.  We spend more time and energy playing video games than we do deciding who will govern us.  My God!  Has our world gone crazy?

For the vast majority of human history, leisure was an occasional activity that took us away from the soul-eating brutality of endless toil.  However, these days, leisure has become the reason we exist, and we’re so addicted to relentless entertainment we can’t see beyond binge-watching Full House reruns.

See you at the abyss!