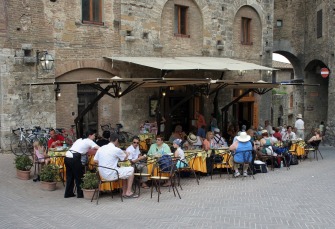 I’m back.  Italy was brilliant.  And, wow, am I ever stupid!  It’s a fact of life that the more I travel, the more I realize I have tons to learn about travelling.  For example, this is what I learned this trip:

All that stuff in your carry-on luggage is junk — you don’t need it — you never look at it on the airplane and you’re hauling it around multiple airports, buses, trains and taxis because you’re an idiot.
There are some serious advantages to disconnecting yourself from the Internet, but it makes you twitch.
You cannot convince Europeans that you are not personally responsible for Donald Trump or Barack Obama’s Cat-In-The-Hat foreign policy — even though you’re actually a Canadian.
Heathrow Airport in London was designed by Rhesus monkeys who were trying to simulate their wild, survival of the fittest, primeval habitat.
Italian food is still the best in the known universe.
Americans have more fun than anyone on this planet.
And if you want something done, find a busy Australian.

Plus, I picked up some useful foreign phrases:

Foreign Phrase — No problem, sir.
North American English — We are so-o-o-o-o screwed!
Australian English — What are ya going on about, ya bloody galah?  I heard ya the first time.
English — Apparently, that big smelly bugger over there owns the dog.  Give him some money, Marjorie, and let’s get back to the hotel.  No, not the brown ones; a couple of the blue ones should do.

Foreign Phrase — It’s a five minute walk to the (restaurant, Metro, hotel, museum, art gallery.)
North American English — We’re totally screwed.
Australian English — Found it on the GPS.  Bit of a trek to bypass the swamp, but we should get there before dark.  Let’s get started.
English — Sensible shoes, Marjorie, that’s the ticket.  Mind the barbed wire and broken glass.  Come on, Garibaldi.  Walkies!

Foreign Phrase — It’s a local delicacy.
North American English — We’re even more screwed today than we were yesterday.
Australian English — Not to my taste, but put a little Vegemite on it and it’s not half bad.  Give it a go, mate.  No drama: I packed five extra jars.
English — No, I don’t have any idea what “bulbo oculare” means, Marjorie, but the dog seems awfully keen.

Foreign Phrase — Arrivederci — Adios — Au Revoir — Auf Wiedersehen
North American English — Good bye!  We had such a wonderful time.  I just love learning about other cultures.
Australian English — No, we’re not leaving yet.  In Australia you get three months holiday for every year you work, another six months if you’ve work more than three years, another three months, if you work more than six months in one go, then three extra months if you don’t use your sick days, two months if you’ve been to the Northern Territories and another year off for good behaviour.  We don’t have to be back to work until July, 2021.
English — Apparently, as long as Britain’s still in the EU, Marjorie, we simply show them the dog at Passport Control.  That should see us right.