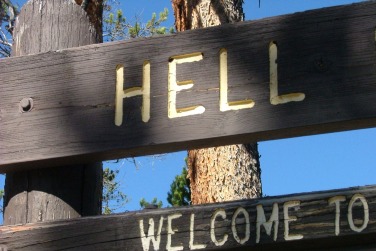 I don’t necessarily believe in Hell, but here are 5 people who are going to be there long before people like me ever arrive.

1 — The person at the Fast Food line who acts as if they’ve never been in that situation before.

These are the ones who stand at the counter and stare at the huge neon menu as if is it’s written in Latin.  Hey! The big difference between the #5 Hamburger Combo and the #6 Cheeseburger Meal is cheese — just cheese — and it’s been that way since 1972.  Besides, at some point, you decided to come here, you got in your car, you drove all the way, you stood in line for ten minutes and you still haven’t figured out what you want to eat?  You deserve to burn in Hell for wasting my time.

People who throw their trash on the ground should be horse-whipped in this life and suffer the Fires of Hell for the rest of Eternity — twice.

3 — The parents who bring their bratty children to the theatre, the ballet or the gourmet restaurant.

I’ve got nothing against kids, but  if yours have the social graces of an exuberant orangutan, don’t  bring them to places where adults gather.  Little Braydon spitting up carrots and going for  distance might be YouTube cute at home, but my wife and I didn’t sign on for her antics added to the ambiance of our dinner, likewise, nothing ruins the enchanting beauty of a dying swan more completely than some pint-size savage three rows over suddenly howling for juice.  Your children might be the centre of your universe, but if you’ve decided not to teach them manners, you’re not doing them or the rest of the world any favours — and you’re going to Hell because of it.

These are the people with specialized skills or knowledge who take advantage of the rest of us just because they can — and then act all smug about it.  It’s a tooth for God’s sake — not the Crown Jewels. Nothing legal costs that much!  And, BTW, fat boy in the truck, my car broke down; I didn’t shoot it in the head.  The difference between Mafia extortion and what these folks do is minimal — and they’re going to have to answer for it.

5 — The people who are always getting offended.

These are the folks who are not so much easily offended as eagerly offended.  They wake up in the morning pissed off with the world and then spend the rest of the day trying to make everybody else just as miserable as they are.  There’s no satisfying these malicious bastards, and for that, they are clearly entitled to all the grief Satan has to offer.