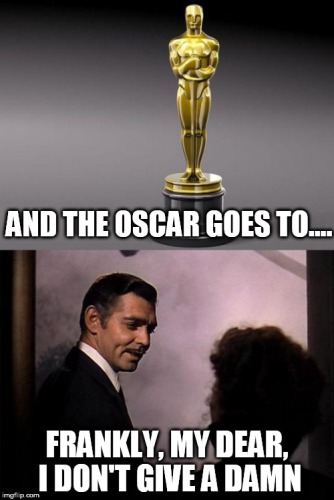 This year, the Oscars have snuck up on me because – uh – well — for the first time in living memory, I don’t really care. This isn’t a sudden revelation: it’s been building for a few years.  Oscar and I are just not that into each other anymore.  It’s sad to lose a lifetime lover, but we’ve grown apart, Oscar and I, and I’m probably going to spend the evening playing with my new friends on Netflix.  So what happened?  Oscar got old.

I’ll grant you I’m no spring chicken, myself.  I can clearly remember the night Oliver, a piece of junk musical, beat The Lion in Winter, for Best Picture – what a shock!  But that’s what Oscar used to be – wild and unpredictable.  It was magic.  It was fun, and everybody wanted to know who won.  These days, despite its chiseled abs and perky breasts, Oscar is old enough to be my grandfather and acts the part.

Let’s face it: the Academy of Motion Picture Arts and Sciences have become a bunch of dithering old people, worried about what the neighbours will think.  Look at all the dicking around over Kevin Hart.  Why does this remind me of Shady Acres Care Facility?
“Okay, fine!  If Mrs. Crabtree can’t run the rummage sale, then I guess we just won’t have a host this year.  Satisfied?”
Plus, there’s the on-again/off-again Popular Picture Award and the bickering over which awards do or do not deserve television time.  God, folks!  Get over yourselves!  Nobody cares!  Ordinary people tune in to Oscar night for the Big Six and wade through the rest because of the dresses.  Here’s a newsflash: there’s only one person who remembers who won the Oscar for Best Animated Short Film in 2010 and that’s Nicolas Schmerkin – the guy who won.

The problem is, like old people everywhere, the Academy just doesn’t realize it’s old.  It’s still thinks it’s Ava Gardner-glamourous with oysters and champagne, but what the rest of the world sees is Meryl Streep, drinking low-fat Chablis and blathering on about the intestinal benefits of ancient grains.  The Oscars are too earnest, too political, too aware, and too damn grouchy to be magic anymore.  They’re not fun.  They’re scolding.

So I’m going to give them a miss for all those reasons and mostly because — ever since The Hurt Locker — Oscar has become totally predictable.

Good luck, Black Panther – you haven’t got a chance!

6 thoughts on “The Oscars Are Old!”