I’ve already said I hate summer, so chances are good I’m on Satan’s shortlist of souls he’d like to meet and greet — permanently.  Hating summer is like seeing an ugly baby and then actually saying it : everybody kinda agrees with you, but nobody’s on your side.  However, as the man said, “If you’re going to Hell anyway, you might as well just keep driving.”  So summer might not actually suck — all the time — but here are 5 reasons why I prefer autumn.

Autumn is active — When summer is over, you can actually do things again — like walking down the street or standing waiting for a bus — without feeling like a tributary of the Amazon is flowing down the back of your shirt and into your underwear.

Autumn is cozy — There is nothing better than a fuzzy sweater on a chilly evening.  And is there anybody in this world who doesn’t like fat, warm socks?  These are two of life’s priceless little pleasures that release tons of endorphins.  Unfortunately, they’re not available to us when the temperature is 36 degrees in the shade — and there ain’t no shade.  It is my considered opinion that the lack of fuzzy sweaters and fat socks is why people in desert countries are so grouchy all the time.

Autumn moves — Summer doesn’t move.  It just lies on you like a Hot Fudge Quilt.  Autumn, on the other hand, lives on the breeze.  You can taste it in the early morning, fresh as that first cup of coffee.  It plays in the trees like Peter Pan having a giggle.  It swirls and twirls tiny tornados of leaves at your feet, teases your hair like a casual lover and sends you to bed with an extra blanket tucked up to your chin.

Autumn is made of soup — There is only so much cremated cow a man can stand.  Autumn is the time for great cauldrons of things that sound and bubble and fill up the house with steam and smell and plenty; served in great bowls with bread or in a thick mug, balanced just right between you and your book.

Autumn is serious — When the temperature starts to drop in the Northern Hemisphere, we all have this weird cultural memory that “Winter is Coming” and it’s going to try to kill us.  We don’t lay in stocks of food and firewood anymore, but we do subconsciously put away the toys of summer and assemble our tools.  That’s why God made “Back to School” sales.

It might still be three weeks until Autumn is “officially” here, but Mother Nature and I always start early — right after Labour Day.  And I can see it from here.

I woke up this morning and, for the first time, I could see autumn from here.  What a relief!  It’s not that I hate summer; it’s just that summer is so-o-o-o-o long and sweaty and inconvenient and bug-infested and sticky and annoying and … I think I’ve made my point.

Summer is noisy — Everybody and his sister thinks they have a moral obligation to share their taste in music with the universe.  From the middle of May to Labour Day, Earth’s atmosphere is wall-to-wall stereos, blasting away like the Seven Trumpets of the Apocalypse.  It’s a wonder other planets don’t get pissed off and call the cops.

Summers are underdressed — It’s as if the entire world went to the beach and never came home.  I’m no prude, but men, shirts (even t-shirts) should have sleeves, not gaping holes; dirty feet are not fetish material, especially in a bank or a restaurant; and ladies, boobs and bum cheeks should go on the inside of whatever you’re wearing — that’s why you’re wearing it.

It’s hot — Mother Nature goes nuts every the summer — that’s her job — but that doesn’t mean I have to like it.

The food sucks — I like BBQ as well as the next man, but I don’t believe 30,000 years of human development should be thrown away every time the sun shines.  We’re not Neanderthals, and contemporary life should feature better cuisine than a glob of potato salad, a lukewarm beer and a slab of overcooked meat snatched from a backyard crematorium by somebody wearing a “Kiss the Cook” apron.

Nobody’s around — Every time you want to do something important, the person you need to sign the form, stamp the approval or initial the receipt is always on vacation.  There is nothing more frustrating than standing there, up to your elbows in some bureaucrat’s idea of paperwork Nirvana, while the one person you simply have to have to complete the process is at the beach, dancing half-naked around the fire while her drunken secretary is busy flipping the burgers — all to the tune of “In The Summertime” by Mungo Jerry. 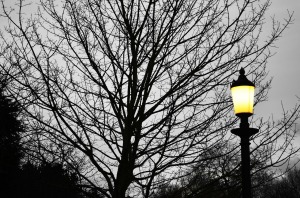 Yip all you want about Spring Fever — Fall Fever is worse.  It plays mischief in your eyes with Van Gogh colours dancing in the trees to sad 60s songs.  It rustles crisp on shuffle footsteps that leave no evening echo.  Its dim light chilly is brittle on the breeze, and it speaks in long, muffled tones.  It wears knitted scarves and fat socks and smells like hot chocolate, steaming in the afternoon air.  It aches winter but touches your face with warm summer sun, like a treacherous lover teasing its escape.

As old as I am yet to get, I will never see September without back-to-school.  Stiff new paper; pens with all the parts; blunt pencils of virgin wood, waiting to be pointed; plastic instruments with purposes so academically secret they have never been revealed.  And books.  Heavy books.  Books that told me numbers were true and always acted responsibly.  Books that showed me that some things could be proven.  Books whose gone places and dead lives taught me immortality.  And books that lied — so cleverly, so carefully, so convincingly close to me that we became friends.

Fall Fever has a serious heart.  It is what once was — coming again on the low evening light.  Every year when the sun moves south, I hear it scratching its quill pen verse on the skinny wind.  I see the words and accumulating phrases and remember the books that brought me here.  The tales that told me, showed me, explained to me why we are all just souls — single, lost and divine.  Fall Fever remembers that for me.  And it reminds me that it is the stories we tell each other that gather us together against the wind.