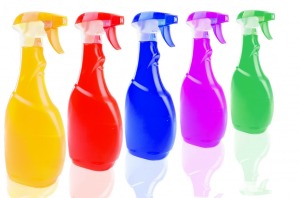 We are literally cleaning ourselves to death.  Go to any household in the 1st World and you will find a cornucopia of chemical weapons worthy of Saddam Hussein in his heyday.  We’ve got antibacterial sprays, wipes, soaps, foams and a multitude of cleansers — all there to keep us safe from an evil array of nameless germs we’re convinced are waiting to ambush us.  And these aren’t even the dangerous ones like typhus, smallpox or cholera.  No — we’ve gone to all this trouble to try and fight off a runny nose.  (Good luck on that one, BTW)  But the question is does it do any good?  Nope!  In fact, ask any epidemiologist and she’ll tell you all we’re doing is helping Mother Nature cull the herd.  Plus, if we keep this stupidity up, we’re going to get ourselves in some serious trouble.  It isn’t a very complicated process, so here’s the Twitter version.

Antibacterial anything might be effective in the short term and, as the advertisement says, “kills 97% of all germs on contact.”  Yeah, that’s pretty cool!  But what about the other 3% who survived the attack?  Those tough little bastards are still hanging out, waiting for the all-clear signal to mutate and breed.  And guess what?  You just gave them a vaccination.  Suddenly, the next generation of wiggly little uglies aren’t all that worried about the active ingredient in Lysol™ (or anything else, for that matter.)  Now — clean your kitchen counter once a day for a year.  You’ve certainly killed off billions and billions of germs, no doubt — the weakest ones.  Unfortunately, what you have left is a strain of bacteria that’s had 365 cracks at the Immunity Challenge, and they’ve won every one of them.  Basically, you’ve bred a race of ass-kicking bacteria that’s sittin’ there, drinkin’ bleach as if it were red wine.  It simple genetics, folks.

I’m not saying we should go medieval on the world and revert to the dirt of past eras.  That’s just icky.  However, if we don’t lighten up on the chemical warfare, one of these days Mr. and Mrs. Bacteria are going to bring the kids over to play, and they’re not going to knock on the front door; they’re going to kick it in.