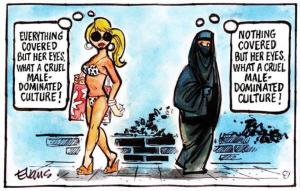 Thank God (whichever one you’re most comfortable with) that we’ve finally gotten around to banning a few articles of clothing in this country.  Our apparel laws are woefully archaic.  They were written in a simpler age when our society’s only concern with “What Not to Wear” was public decency.  Back in the day, people could wear what they wanted, when they wanted, as long as they kept the good bits covered up and casual Friday didn’t get out of hand.  It other words, one man’s ho was another man’s heroine, and nudity was left to the imagination.  Fortunately, our more sophisticated world now understands that clothing reflects some very dangerous personal preferences, and in a society where everyone is presumed equal until proven otherwise, that simply isn’t acceptable.

For those of you who have no idea what I’m talking about, because your only brush with Canada is the United Nations’ annual Most Livable Nation in History Award, let me explain.  Recently, the government of the French section of my country, Quebec, wrote a legal “Charter of Values” which would ban a lot of people — notably Moslems, Christians, Jews, Atheists and Madonna — from wearing religious symbols in public.  Presumably, this law, if it gets enacted, will reflect the secular nature of 21st century Quebec society.  FYI: in reality, the Parti Quebecois (provincial government) doesn’t give a tinker’s tabernac about secularism.  They’re looking for a couple of other things.  One, they want a deterrent to wholesale immigration, which is diluting the voting power of the old Habitant families, the PQ’s traditional power base.  And two, they want a sovereignty issue they can beat the rest of country over the head with – as in, you’re not the boss of me this time, you Anglo nom d’un chien.  To be fair, the Parti Quebecois also wants to get rid of the hijab, which most Canadians see 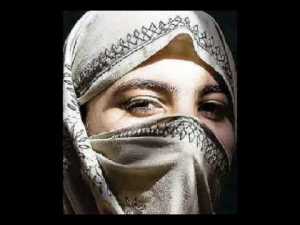 as degrading to women.  However, pulling the girls out of their burkas and putting them in push-up bras is causing a lot of collateral damage to turbans, yarmulkes and oversized crucifixes which, like the baby, are getting thrown out with the bath water.

Obviously, this little gem of “Do as you’re told” has caused a lot of debate.  Unfortunately, no one has been brave enough to address the neglected central issue of this controversy – until now.  In a word, yoga pants.

If you’re running around banning things, yoga pants are a good place to start.  First of all, yoga is one of the central tenets of two of the world’s largest religions, Buddhism and Hinduism, as well as being pretty damned important to Jainism (whatever that is.)  Plus, evening and weekend yoga classes are probably the only place middle class mothers (not to mention recent divorcees, single chicks and the “God, I’m fat” girls who really aren’t) can find a slice of spiritual peace in our pulsing Western society.  I realize that maybe half of all yoga pants never actually get to yoga, but as religious experiences go, yoga has more followers than football.  If turbans and head scarves have to go, yoga pants shouldn’t be far behind.

However, above and beyond all that this secular values scam is a credible way to get rid of the worst female fashion item to hit the streets since Oscar Wilde’s boyfriend thought it would be a big joke to put women in bustles.  I know, I know!  Everybody says they’re comfortable, but honestly I don’t see how they can be.  Look around!  Women of every shape, size and description are sausage-rolled into one-size-fits-all containers, like so much Bratwurst.  They’re overflowing the top, sticking out the bottom and when they walk away from you it looks as if two little animals are having a war in the back of their pants.  This is all-black, 50% breathless Spandex, ladies.  The only way it can be comfortable is if the rest of y 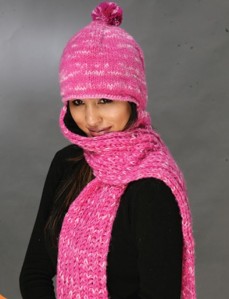 our wardrobe is so godawful it’s under review by Amnesty International.  Banning yoga pants would do you and everybody else on this planet a favour.

Personally, I think that if Premier Pauline Marois and her band of banners don’t jump on the banned (okay, I’ll stop) wagon against yoga pants, they’re clearly not serious.  However, if they are serious, why stop with yoga pants?  What about those diaper-full, low riders jeans teenage boys wear?  Or short-short shorts?  Or skinnys?  Or scraggy beards?  Or badly drawn tattoos?  Anything flesh-tone on Miley Cyrus?  The list is endless.  After all, it’s not like anybody’s looked in a mirror in the last twenty years.