On a sunny summer day in 1857 (June 26th to be precise) a disciplined line of 62 officers and men lined up in Hyde Park, London, to await their Queen — Victoria.  She was coming to award them a new military medal — one which would, along with the Congressional Medal of Honor in America, become one of the highest military honors in the world – the Victoria Cross.  These men had just recently fought for “Queen and Country” in the Crimea, a nasty little war, distinguished only because it was the first “living room war.”  Foreign correspondents from Britain had been on the scene at Sebastapol, Balaklava and the Alma River.  They saw and they wrote.  Their stories told the British public about disease and filth, inadequate clothing, obsolete equipment and idiotic orders, but what captivated the country was the nobility and the bravery of the common soldier.

Even though the public now loved him, Great Britain had no way to recognize its ordinary fighting man.  There was the Distinguished Conduct Medal, instituted in 1854, and staff officers were decorated all the time, but for most soldiers, the best they could hope for (aside from not getting killed) was a mention “in dispatches.”  Several officials took up the cause.  Liberal MP Thomas Scobell brought a motion to parliament suggesting an “Order of Merit…to which every grade and individual from the highest to the lowest… may be admissable [sic].”  Meanwhile, the Secretary of War wrote to Prince Albert about “a new decoration open to all ranks.”  His letter was enthusiastically received by both Prince Albert and Queen Victoria, who wrote back to suggest the name be changed from “the Military Order of Victoria” to “the Victoria Cross.”  Victoria also took a hand in the design of the medal itself, changing the motto from “for the brave” to “for valour” and recommending that, even though it was to be symbolically made from ordinary metal, it should be bronze, not copper.

The drawings and specifications, along with Her Majesty’s “suggestions,” were given to the jewelers Messrs. Hancock of London, 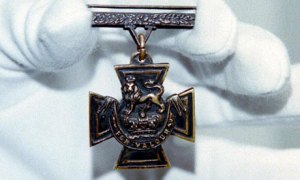 where H. H. Armstead is credited with the actual design.  It’s unlikely that he was the one who decided to make the medals out of the bronze from Russian cannons captured in the Crimea.  It was probably just cost cutting, but at the time, this extra bit of symbolism was not lost on the British public.  Hancock and Company still make the Victoria Cross today from the same lump of bronze, safely stored in the vault of the Royal Logistics Corps, in Donnington.  The cannons, two 18-pounders, are still at Woolwich Barracks, where anyone can plainly see that these “Russian” guns are, in fact, Chinese.

Since that first sunny day in June, the Victoria Cross has been awarded only 1,357 times to 1,354 recipients throughout the British Commonwealth – which, given the number of wars and warriors over the last 150 years, is not a lot.  It has been won by 4 sets of brothers, 3 times by fathers and sons and 3 men have won it twice.  Incredibly, during World War I, it was won by three men who all lived on Pine Street in Winnipeg, Canada.  Pine Street is now named Valour Road.  The youngest recipients were Andrew Fitzgibbon and Thomas Flinn, age 15, and the oldest was William Raynor, 61.  Legend has it that, at the first ceremony, Queen Victoria, stretching awkwardly from the side-saddle of her horse, actually pinned the first medal through Commander Henry Raby’s chest.  Popular Victorian fiction says he didn’t even flinch.  A fitting beginning for the Victoria Cross.