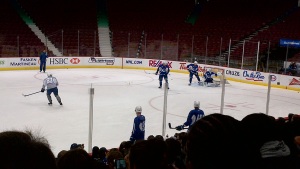 As most of you are probably unaware, the National Hockey League of North America was in a labour dispute for nearly half of this season.  You’re unaware of this because ice hockey fans are far more devoted than they are numerous.  The very nature of hockey dictates that it’s a regional sport.  In order to play the game properly, you need large sheets of uninterrupted ice.  Since most of our planet — outside of Canada and Russia — isn’t frozen for half the calendar year, hockey has never caught on worldwide.  Besides, like tennis, jai alai and Grand Prix auto racing, hockey is an affluent sport.  Children, in a playground, don’t spontaneously play hockey.  The game needs some forethought.  One needs equipment: skates, sticks, pucks, body armour and, of course, that sheet of uninterrupted ice.  In reality (despite the myth of the backyard rink) if you’re not middle class and above, you’re not playing hockey.  Of course, none of this is important, now, because the labour dispute has been settled and the world’s finest professional ice hockey league is back in business.

So, what’s the big deal, you might ask?  Of the seven or so billion people on this planet, at a conservative guess, six billion of them couldn’t care less whether it’s game on or puck off in the National Hockey League.  This is true, but the recent labour dispute and its resolution gives us an unique insight into a part of the human experience – the sports fan.

Just a little background.  Humans have always had professional sports.  It was probably SRO at the Roman Coliseum during Slaughtermania IV in the 2nd century.  However, the only reason the Flavians could pack them in, back in the day, was they had a product to sell – in this case, mass homicide – and people who wanted to buy it.  Flash forward two thousand years, and we still have guys like Ronaldo, Lebron James and Joe Flacco who spend most evenings and weekends playing with their balls because tons of people are willing to pony-up unholy amounts of money to see them do it.  Professional sports have always been dependent on the fans (incidentally, the word “fan” is a diminutive of fanatic) and that includes hockey.

There was one telling feature of the recent hockey league labour dispute, though.  Even as the billionaire owners were fighting it out with their millionaire employees to see who gets the lion’s share of the fan’s folding money, the fans (those same faceless nobodies who pay the bills) were treated like crap.  Both sides made a show of being crocodile tear sorry for shutting down the league, but everybody knew neither side was all that sincere, including (there are those folks, again) the fans.  In fact, every word I read, saw or listened to during the entire dispute that even mentioned the fans (there weren’t that many) essentially said they were getting screwed – again.  My point is nobody (owners, players, the media or Marge the traffic cop) made any attempt at disguising the fact that the National Hockey League and its employees didn’t give a rat’s left buttock for fan loyalty, fraternity or any of the other “tys” they so proudly expound.

Fast forward to the end of the lock-out.  Gary Bettman, Commissioner of the

NHL, walked up to the microphone and said, “Sorry!” and that was supposed to make it all right.  Ready for a shock?  It did!  Less than a week later, every pennant-waving, jersey-wearing, overpriced-beer buying, “I’ve just been treated like dirt” hockey fan was back at it, as if nothing had ever happened.

I know there are thousands of people sitting in classroom all over the world right now, studying sociology and the behaviour of groups.  Save your money, folks: it’s obvious human groups are stupid.  It would have taken exactly one hockey game with zero attendance to scare the National Hockey League into treating their fans properly — three hours of silence, after four months of getting pooped on.  Not a bad use of the fan’s enormous purchasing power; unfortunately, nobody even considered it.  Instead, hockey fans all over the continent were literally standing in line to start shelling out their coin again.  This proves, beyond all argument, that in groups of more than a dozen, sports fans haven’t got a brain cell among them.  I suppose that’s why they’re called fan-atics.