Today is Canada Day — Canada’s Birthday — and, in honour of the day, here are seven things I love about my country and one I hate. 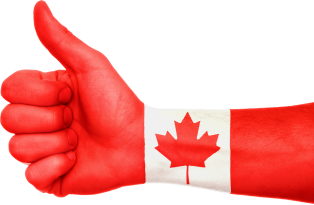 1 — Aside from the Brits, Canadians have the coolest flag on the planet.

2 — My country is incredibly beautiful.  For some strange reason, cameras love Canada the way French pigs love truffles.  I suppose it helps that 90% of the country doesn’t have any people in it, but for drop-dead gorgeous, even our slums aren’t that bad.

3 — Canada is safe.  Yeah, yeah, yeah! There are places in this country where you don’t want to be stranded, drunk off your ass, at two in the morning.  The thing is, though, those places are 2 — maybe 3– hundred kilometres outside any established urban area, and the local inhabitants there don’t want to rob you — they want to eat you.  In general, to get killed, beaten up or even pushed around in my country, you really have to work at it.

5 — Go to any city, town or village in Canada and you will find a library and anybody — ANYBODY — can go there, get a book, sit down and read it — for free.

6 — We’ve got the whole world in our backyard.  Walk 2 or 3 kilometres in any direction in any city in Canada, and you’ll hear at least four different languages.  Keep going and you’ll eventually hear them all — even the dead ones.  You can eat in a different ethnic restaurant every week for two years and never repeat yourself.  You can dance, sing, read, write, paint or practice the fine art of Bulgarian nose knitting in my country — and everybody thinks that’s cool.

7 — Butter tarts, Terry Fox, Toboggans, Norman Bethune, Cheezies, Poutine, David Suzuki, Leonard Cohen, a warm parka on a cold morning, nothing between me and the horizon, Spring, Tim Hortons, Rene Levesque, mitts, John McCrae and all those other things that are so uniquely Canadian I can’t even explain them to anybody who doesn’t live here.

Unfortunately, most of our “unique Canadian identity” is taken up with one overwhelming idea — we’re NOT Americans.  This crap is really tiresome.  We spend huge amounts of time looking over our shoulder, checking and comparing and waiting for the Americans to do something stupid so we can feel inherently superior.  When George Bush was president you could cut the smug in this country with a knife.  Now that we’ve got Donald Trump to kick around, we’re on the verge of a national orgasm of auto-erotic vanity that may never be equaled.  This is not healthy.

But what the hell!  If it wasn’t for the Americans playing silly bugger all the time, we’d have nothing to bitch about except the weather.