We do not live in a sophisticated age.  It’s a shame, but it’s true.  Our intellectual prowess is centred on finding the E! News app for our Smart Phones.  Our curiosity is confined to Kim Kardashian’s matrimonial motivation.  Our music is repetitive; our films derivative and our artistic vision still focused on Paris Hilton’s bum (although we’re all getting a little jaded with that.)  In comparison to most of recorded history, our time is, like the Dark Ages, distinctly low-end.  This is no sin, by the way.  As just about everyone has cliched (about almost everything) in the last six months: “It is what it is.”  So I come not to bury our time, but to praise it.

A Mogul like luxury covers our brutish world.  It disguises the crude nature of life in the 21st century.  We believe, therefore, that living vertically — with running water — makes us culturally superior to those in history who didn’t.  However, as convenient as peeing inside on a cold winter night might be, it has nothing to do with our contribution to the continuity of the human experience.  Simply put, we’re barbarians with indoor plumbing.

Just look around.  Ours is an angry world, thinly veiled by repeated assurances of

tolerance.  Our conversations are so laced with profanity they’re incomprehensible.  We constantly call each other names — off-handedly.  “Bitch” is an all-purpose descriptive, eagerly applied across the genders, and it’s the mildest of our nominals.  Anatomical insults are mandatory in any conversation, just to demonstrate our total disregard not only for the opposing opinion but also for anyone who espouses it.  In the same vein, we conduct our disagreements with loud not logic, shouting like Visigoths to show the passion of our principles.

Sexually, we behave like parochial tribesman, mistaking smut for sophistication.  We hang on every slyly exposed curve of the female body, giggling like villagers at everything from a skirt lifted on an unexpected breeze to heavy-handed wardrobe malfunctions.  To prove our sophomoric enlightenment, we’ve made female breasts de rigueur in visual entertainment (everything from commercials to sitcoms.)  Likewise, gratuitous nudity is a Cable TV staple and amateur porn a celebrity necessity.   We’ve turned sensual privacy into random exhibitionism, based on a smirking philosophy dedicated to underhanded titillation.  Sex is so overvalued in our society it’s no wonder young people are too confused to do it properly.

Meanwhile, we’ve undervalued education.  Scholars are labeled nerds or geeks or worse.  They have taken such a back seat to the beautiful among us that recently the number one career ambition for girls in North America was Reality TV star.  The Kardashians might be smart business women (which I think they are, BTW) but obviously that isn’t the role model message they’re providing.  It’s common knowledge that Bill Gates, Steve Jobs and Mark Zuckerberg all dropped out of school, a fact pointed to with pride by every never graduated student with visions of grandeur.

And what is our vision of grandeur?  Indolence!  Couch potato-ing, social networking and gaming are now the world’s fastest growing activities.  More people play Farmville™ than actually farm.  More people are creating urban utopias in Sim City’s™ many incarnations than are at work on real urban problems.  And more people are engaging in criminal activity in Grand Theft Auto™ than are employed in law enforcement.  Our collective energies are being harvested by computers at an alarming rate.

This will be our legacy to the continuum of civilization.  As we persist in our 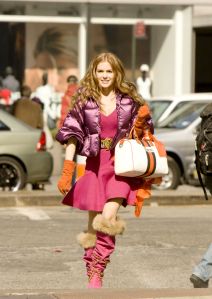 relentless pursuit of leisure, we will demand more and better machines to do it with.  And not just handheld gadgets to take pictures or play games, but machines that will keep us alive, drive for us, cut our toenails and deliver pizza.  This is no sci-fi dystopian nightmare but a genuine and optimistic glimpse of our future.

History shows that the insatiable craving for spices, treasure and slaves drove the Europeans out of the parochial ignorance of the Medieval Age.  Their exploration and exploitation of the world funded the flowering of the Renaissance.  So, too, will our insatiable need for amusement drive our technicians to digital places as yet unimagined.  The playthings they produce will fund future and wiser generations.  When history views us (and it will) our monuments won’t be pyramids and cathedrals erected to the glory of our gods.  They will be miniature screens and gigantic TVs, lost in the dusts of obsolescence.  And when history judges us (and it will) we won’t be guilty of squandering our resources on smutty celebrities.  We will be praised for driving a mechanical revolution with our laziness.

We might be dumb, inarticulate and rude, but we’ve gotten used to sitting on our ass; now, we demand it.