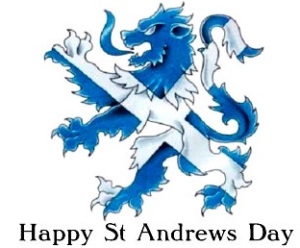 Today is the feast day of St Andrew, the patron saint of Scotland.  It’s a day when Scotsmen (and women) all over the world …do nothing by way of celebration!  Of course, in Scotland, it’s a Bank Holiday, except the Scots, being a pragmatic people, have said the banks don’t have to close if they don’t want to and employers don’t have to give you the day off.  (“Ya’ll no waste an honest da’s work fer the likes a tha’ muck!”)  St. Andrew is also the patron saint of Greece, Romania, Russia, Prussia, the Ukraine and parts of Italy and Malta.  Busy boy, our Andrew!  He is also the brother of St. Peter the keeper of the Gates of Heaven.  My great uncles used to say that just as St. Peter greets the dead at the Pearly Gates, his brother is right there beside him, collecting the pennies.  (“Ya’ll no be needin’ tha’ where yar goin’ laddie.”) And if you don’t get that joke, you’re not a true Scotsman (or woman.)

We Scots have always been proud of our heritage, and unlike the Irish with their overblown St. Paddy’s Day (more booze and less brag, say I) keep a low profile.  It took an American Swede, Arthur L. Herman, to tell everybody that the Scots actually invented the modern world – which we did.  In that same vein, here are a list of prominent Scots and their contribution to civilization.

John Dunlop – who invented the rubber tire, although for years he spelled it with a y, as in “tyre.”

Sir Walter Scott – who invented chivalry with his novel Ivanhoe.  Before that, knights were just smelly old men with swords — who dressed up in tin cans.

James Dewar (not Jimmy Dewar, the bass player) – who invented the thermos 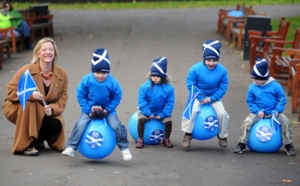 to keep hot things hot and cold things cold long before those interlopers the McDonalds, ever thought about it.

James Hepburn, 4th Earl of Bothwell – who invented Stockholm Syndrome when he kidnapped Mary Queen of Scots (see below) who eventually got to like the idea and married him.

Alexander Graham Bell – who invented the telephone, although wouldn’t you know it, every time a Scotsman gets something,  there’s a Englishman hiding in the bushes waiting to take it away from him.  (I’m looking at you, Elisha Gray.)

Robert Louis Stevenson –who invented adventure stories which were great for kids until the Baby Boomers came along with their stupid “Awareness” and spoiled everybody’s fun.

James Watt – who invented “spin doctors” when he didn’t actually invent the steam engine but made it look like he did. 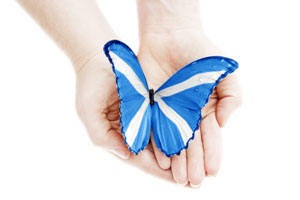 John Knox – who invented the Puritans and religious intolerance.

Adam Smith – who invented “Every man for himself” economics.

Sean Connery – who invented the derogatory cinematic comparison.  After he played James Bond, no other actor has ever been able to measure up.

John Baird – who invented television and is currently burning in Hell.

Mary Queen of Scots – who invented the stupid political leader by continually getting out-manoeuvred by Scotland’s aristocracy and Elizabeth I.

Bonnie Prince Charlie – who continued the incompetent tradition of his great-great, great grandmother by sending his Highland followers charging into Lord Cumberland’s cannons with nothing to protect them but their tartans. 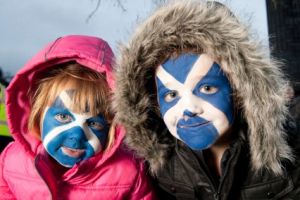 than that flighty Englishman, Robin Hood.  Here’s proof.  Kevin Costner, who portrayed Robin Hood in the movies, was also a baseball player, a corn farmer, a postal worker and a fish: Liam Neeson, who played Rob Roy was Zeus, Aslan and Michael Collins, all gods in their respective kingdoms.  He trained Batman, Obi Wan Kenobi and Darth Vader.  He also single-handedly wiped out an international gang of kidnappers and kicked the crap out of a pack of wolves. (You do the math.)

Joseph Lister – who didn’t invent Listerine but was so psychotically clean the guy who did named it after him.

David Livingstone – who invented converting the heathen — whether they liked it or not — but is most famous for getting lost.

Alan Pinkerton – who invented the private detective which accounts for over half of America’s cultural legacy.

Robbie Burns – who invented the New Year ’s Eve party, but otherwise wrote nothing but gibberish.

James Barrie – who invented Peter Pan the prototypical “non-threatening” boy, whom fathers have wished their daughters would lust after ever since.

William McGonagall – who invented bad poetry and is still considered the worst poet ever to touch pen to paper.  Don’t believe me?  Read “The Tay Bridge Disaster.”

Billy Connolly – who invent Scottish humour and gave every Scotsman (and woman) the inherent ability to laugh at themselves.