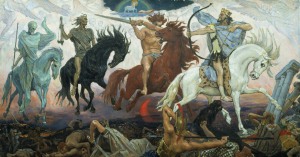 I have spent the last week in contemplative study.  I have consulted ancient texts — both real and imaginary.  I have plotted the patterns of the earth, noting physical disasters and weather-related phenomenon.  I have made some very complicated calculations.  I’ve thought about it really hard and will now make a bold prediction.  The world will NOT end on May 21, 2011.  Yes, that’s right; rejoice, dance, sing, go back to work, buy green bananas and carry on as if nothing happened – ‘cause nothing’s going to happen.  You have it on the best authority possible – me – the world is not going to poof out like an old candle next Saturday.  You’re safe — at least until next year when the Mayans come calling.  Before you think I’ve gone completely daffy you need some background information.

It seems the folks over at Family Radio, led by Harold Egbert Camping,

have decided that May 21st, 2011 is Judgement Day.  You may have seen the billboards; they’re advertising it heavily.  For those of you who are unfamiliar with Judgement Day, you’re doomed anyway so I wouldn’t worry about it, but in a nutshell, the faithful go to Heaven, the rest of us go to Hell.  It’s pretty much your standard, garden variety, run of the mill Apocalypse — the same one that’s been hanging over our head ever since Clopnoptra the Lazy wanted to impress the girls with his superior spiritual knowledge.  “End of the world, ladies.  Anything you want to do before it’s over?”  Regardless of whether Clopnoptra got laid or not, charlatans have been predicting our demise from that time forward.  Mostly we give it the “Yeah, yeah, right!” treatment and go about our business, but every once in a while one, of these clown’s ideas stick to our psyche.  I’m looking at you, Nostradamus.

According to his followers, Nostradamus is the Big Kahuna of all the predictor guys.  He foretold the rise and demise of Napoleon and Hitler, the death of Henry II and the Great Fire of London, among other things. The faithful point to several significant stanzas (which are not in chronological order, by the way) to back up their claims.  I fully understand that there are more things in heaven and earth, than are dreamt of in my philosophy, and Nostradamus wrote some pretty cold-sweat, creepy stuff, way back when.  But I’ve read some of his writings (albeit in translation) and the guy’s all over the map.  The vast majority of what he wrote, which never gets quoted, is gibberish, open to wild interpretation.  He wrote so much open-ended nonsense that if you’re looking for something from Nostradamus you’re probably going to find it — somewhere.  For example, here’s a much quoted little ditty (again, in translation.)
“Songs, chants, and refrains of the slavish mob
Whilst the Princes and King are captive in prison
Shall be received in the future as oracles divine
By headless idiots deprived of judgement”
I’ve seen this interpreted as Nostradamus describing the French Revolution, the Russian Revolution and some other revolution that hasn’t even happened yet – each one proof positive.  However, like most of the stuff he wrote, it could be today, could be tomorrow; it could be anything.  Basically, the faithful cherry pick what they like out of the text and read metaphor into the rest.

There’s also a thing that I just don’t understand, and nobody even tries to explain it.  Nostradamus lived in the 16th century.  He made his predictions to a crowd of God-fearing ignorant Christians.  Why didn’t they freak out and burn him for a witch?  In those days, the church ran for the torches if you said hi to the cat, so predicting the future must have been an Inquisition biggie — especially if Nostradamus was as accurate as everybody seems to think he was.  From what I know about history he shouldn’t have made it past the first confession.

Finally, the thing that kicks mega holes in the guy’s credibility is something the faithful aren’t actually quoting anymore.  In one of his many rambles, Nostradamus runs out an ironclad guarantee that Armageddon is going to take place in late autumn or early winter of 1999.  For those of you unfamiliar with Armageddon, it’s the end of the world.  Oops!  Unfortunately, we’re all still here, twelve years later and, from my point of view, Nostradamus is out of the predicting business.  It’s all there in black and white.

That’s how I can make such a confident, and soon to be, accurate prediction that the world is NOT going to end on May 21st, 2011.  If that hotshot Nostradamus can’t get it right what are the chances a Johnny-come-lately like Harold Egbert Camping has any inside information?  Besides, the sweet part is if I’m wrong, nobody’s going to be waiting around to say I told you so.

Wednesday: As we approach the end of time find out what the Mayan have to say about it.