Sometimes, reading the news is not the best way to start your day.  I’m not going to recap the body count of disasters pending on our planet, but there seem to be a couple of bucketsful.  So much for the dog days of summer!  Remember when summer was a time when nothing much happened?  When the whole country painted itself into a Norman Rockwell corner and spent the next couple of months lying around, waiting for the colours to dry?  Summer was a time when the beer was cold, young girls were beautiful, old men sat in the park and hot dogs were haute cuisine.  A person could grab a book (that didn’t plug in) and read it or just sit on the grass and contemplate the wisdom of the world.  I’m not lamenting the passing of a former age.  I understand that Rockwell made up those Saturday Evening Post covers, Dennis the Menace was a brat and Father didn’t always know best.  But, however false it might have been, there was a certain security in summer.  It was warm and sleepy.  And there was a vague idea that the bad guys were taking their kids to the beach or something and wouldn’t be plotting our destruction again until after Labour Day.  We had time and leisure to stop and be serious, ask ourselves those insolvable questions or just wonder why.  Nobody ever wonders why anymore.  We all seem to take what we’re given and tough it out.

There’s a famine in the Horn of Africa.  People are starving to death where they stand.  At last count over 10 million folks in Somalia were on the endangered peoples list, and it’s only going to get worse.  It’s common knowledge that Somalia is a basket case country.  Nobody’s in charge, nobody knows what’s going on and nobody cares who does what to whom.  By all accounts, even the Mad Hatter’s is looking around and texting WTF.  But do you ever wonder why we can’t feed these people?  I don’t mean just today or for a while; I mean in the long term.  Why, with all the resources at our disposal we can’t face this human crisis and get things straightened out once and for all? I don’t mean to be flippant, but famines in Africa seem to be one ongoing event.  In my lifetime, millions have died, billions have been spent trying to save them, and nothing ever changes.  We can theorize and chatter all we want about neo-colonialism, addressing the root causes of poverty and blah, blah, blah.  But the reality is we’re doing something wrong.  Do you ever wonder why we keep doing it?

The bottom half of Europe is about to go under.  Portugal, Italy, Greece and Spain are financially fast tracking themselves into Debtor’s Prison.  They’ve borrowed and spent more money than they can possibly pay back in ten generations.  Panic is no longer optional.  Currently, the best financial minds in Europe are wearing out calculators, trying to figure a way out of this economic crisis– and they aren’t having much luck.  But they better hurry because if things get any worse, it could possibly destroy the Euro and even the EU itself.  Do you ever wonder why responsible governments get themselves into these financial problems?  It’s obvious to everybody else on this planet that you can’t spend more money than you make.  Why hasn’t it occurred to any politicians?  Aside from times of war or natural disaster, governments should never be in debt.  I’m not saying governments should make a profit but they might try managing their citizens’ money a little better.  National pride alone should kick in somewhere.  It always amazes me that people who manage their own money responsibly allow their governments to act like drunken sailors.  (No offence to the nautical among you.)  And this has been going on since Nebuchadnezzar II borrowed millions to build The Hanging Gardens for no apparent reason — other than prestige.  But do you ever wonder why? 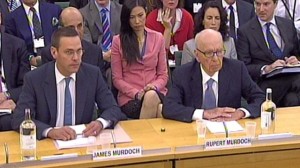 Finally, Rupert Murdoch was summoned to answer a few questions in front of members of the British Parliament.  This is the final act in a scandal that’s probably been going on for over a decade.  Murdoch is certain he’s ashamed of his organization, but he’s just as certain he’s not responsible for it.  To be fair, he probably isn’t.  I don’t think he has the technical knowledge to hack a phone.  And I doubt very much that the old boy stood in a shadowy alley and handed an envelope full of money over to Constable X for the police records.  However, the last time I looked hacking private telephones and bribing policemen were crimes.  Somebody is responsible for them, and the money had to come from somewhere.  It’s pretty cut and dried.  Unfortunately, in this case, although everybody admits villainy was involved, nobody admits to being a villain.  Don’t you wonder why somebody from Parliament didn’t just ask Murdoch who did it?  It’s a simple question: “If you didn’t do it, who did?  Where did the orders come from, and who carried them out?”  There are no complications here.  The guy was sitting there for a couple of hours.  He had time to get a pie in the face.  Yet nobody bothered to ask him who actually committed the crimes his company is accused of.  This is unbelievable!  Nobody has that much influence.

Tomorrow, I’m going to take my electronic newspaper out on the deck.  I’m going to sit in the morning sun — with my coffee — and wonder why.  Why with all our technology, knowledge and problem-solving ability, we can’t figure out how to feed people, manage our finances or convict criminals.  I’m going remember lazy summers, long gone, and try to figure out if I have any answers.  Maybe the folks who run the world should give that a try, as well.