In the spring of 1945, World War II was just about over.  American bombers by day and British bombers by night were pounding Germany cities into rubble.  General Patton’s tanks were sweeping east, racing for Berlin, where the Russians were already on the outskirts.  In short, Nazi Germany was being squeezed to death.  At the center of the inferno that was Berlin stood the Reichsbank, its buildings blown to ashes but its huge reserves of gold still intact – including the millions looted from Europe during the war.  The question was: what does one do with over a billion Reichsmarks in gold?  It was decided to hide it underground and the vast majority was shipped to the Kaiseroda mine, 200 miles south of Berlin.  Within weeks, General Patton’s army overran the area and seized the stolen assets of the collapsing Nazi regime, every cent of which has been accounted for.  However, not all the gold made it to the Kaisarode Mine.  There are records that show a smaller but still vast treasure was sent to the Bavarian Alps, to be hidden there.  It never got there.  Somewhere in the chaos, what modern speculators say could be as much as $50 million in gold, was “lost.”  What happened?  It’s nearly impossible to tell.  Immediately after the war, several people were caught with small amounts of the “lost” gold, but none of them knew anything about what had happened to the majority of the treasure.  There have been several theories put forward, but none of them answers the two basic questions: how does one hide $50 million in gold, and how does one then transport it undetected?  Occasionally, a stray bar or two will surface in odd places like Canada and Thailand, but, so far, their “ownership” has not been traced.  Ironically, the Nazis themselves put certain impurities into their gold ingots so that it could be easily identified.  There have been a few cases of golden objects with these exact impurities found, but, unless one is specifically looking for Nazi gold, these impurities go undetected.  So, unless someone confesses, the whereabouts of the “lost” Nazi gold will remain a mystery. 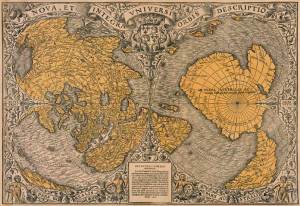 In 1929, a minor clerk working in the Turkish Archives in Constantinople found a map of the world.  The inscriptions on it said that it had been drawn for the Turkish Admiral Piri in 1513 and that it was based on several earlier maps, including one of the ones Columbus used on the first voyage to America, in 1492.  The map caused a mild sensation because, not only was it a valuable historical record but it also showed both the American and African coasts, in fairly good detail.  This caused historians to speculate that a great deal more was known about the world in the 1500s than previously thought.  They never suspected how much, however.

After the initial wave of enthusiasm the map was put away with other documents from the period and largely forgotten about, for the next 25 years or so.  Then, in 1956, Arlington Mallery, a retired naval officer, happened to take another look at what had come to be called “The Piri Re’is Map.”  He noticed something that other researchers had missed: drawn at the bottom of the map was the continent of Antarctica.

How could scholars have overlooked an entire continent?  Very easily.  First of all, Antarctica was not known to exist until about 1820, so there was no reason to look for it on a 16th century map, and, secondly, “The Piri Re’is Map” shows Antarctica as it was before it was covered with ice.  Somehow, even though Antarctica has been covered in ice for over 10,000 years, Turkish mapmakers, in 1513, knew what it looked like!  Unfortunately, that is an impossibility.  In 1929, historians were surprised at the amount of detail on “The Piri Re’is Map;” in 1956, they were devastated.

Although there are many theories, none of them offers anything more than speculation.  The best hope historians have of solving the problem is that the inscriptions say that the map is a copy of some earlier maps.  Could there have been ships sailing the Atlantic before the last Ice Age?  Is Antarctica actually Atlantis?  Nobody knows, yet somehow someone looked under the ice of Antarctica, 400 years before modern seismologists did it with radar in the 1950s.  But how they did it remains a mystery.

In the upper reaches of Scotland, the summer season comes alive every year when herds of tourists, armed with cameras, head for the Caledonian Canal System.  These tourists aren’t there to admire the engineering feat that constructed the canal, however: they’re there to see, and maybe even photograph, the Loch Ness Monster.  “Nessie,” as she is affectionately called by the locals, has been promoting tourism in the area for at least 1,000 years.  As far back as the 5th century, there is mention of a strange creature who lived in the murky water of Loch Ness.  The legend goes that Columba, the great Christian missionary, frightened the monster back into the water where she now makes her home.  Since then, thousands of people have claimed to have seen something in the waters of Loch Ness, and, although some could have seen logs, or very big fish, and some could have been mistaken, chances are good that not every single sighting is the result of an overactive imagination.

The problem is that there has never been either an authentic photograph or an official search.  In the past, the Loch (Scottish for “lake”) itself prohibited that.  It is extremely deep, deeper than the North Sea, and, although not very polluted, thick and dirty with particles of peat that wash into it.  Even a few feet below the surface, there’s near-zero visibility.  Recently, however, sophisticated sonar and computer imaging equipment has been able to take “Nessie hunters” into the water, and, although they have found some strange things, including ancient weapons, on the floor of the Loch, Nessie herself has proved elusive.  They have detected that some thing (or things) are in Loch Ness.  These things are very large and move very quickly – sometimes even outdistancing sonar – but what they are remains to be seen – literally.  So, is there a Loch Ness monster?  Nobody really knows, but there’s very little evidence that says there isn’t and a whole bunch that says there is.  Yet, even though something just might be swimming around the murky waters of Loch Ness, as of right now, and in the near future, what it is and how it got there will remain a mystery.