Last week, I threatened to sit in the summer sun and figure out why we keep screwing up in Africa.  Why despite our best efforts to help, are people still starving to death in places like Somalia?  Why haven’t fifty years of aid changed a thing?  And why don’t the next fifty years look any brighter?  I was prepared to do it, but it turns out I don’t have to.  There are smarter people than me in this world and one of them already figured it out.  Her name is Dambisa Moyo, and she’s an economist from Zambia.  A couple of years ago, she published a book called Dead Aid that explains it all.

Dead Aid is a short book, but it covers a lot of territory.  It’s full of information about the recent history of calamities in Africa and the West’s misadventures in trying to deal with them.  There are cute little details like, in general, the perpetual series of IMF (International Monetary Fund) and World Bank conferences, summits and symposiums that are supposed to be dealing Africa’s

economic problems don’t actually include very many Africans.  Curious, huh?  These little tidbits are scattered all over the pages.  They paint a very different picture of Africa from the one we’re used to seeing.  However, Moyo’s theories don’t rely on anecdotal evidence.  Here’s where it gets vastly interesting.  The book’s premise is based on facts and figures available to any Bob, Bono or Robert B. Zoellick with an Internet connection.  And they’re simple and straightforward.

First of all, fifty years ago, somewhere between 10 and 20% of Africans lived in poverty; the kind you see on TV.  Today, well over 50% are crowded into that address, and the number is growing – almost geometrically.  In that same time period, over one trillion dollars worth of Western aid has been pumped into the continent.  These numbers are all approximate because it’s impossible to get exact figures.  However, they’re so massive that ten billion dollars or ten million people one way or the other are not going to change the percentages.  These figures are appalling.  What they mean is that, at the very least, the rate of return on Western aid money is one African life reduced to abject misery for every $33.33 spent.  Moyo looks at these base numbers and comes to the only conclusion possible: after half a century, Western aid to Africa is not working.  Then, she goes on to say that, since poverty has actually doubled in the last fifty years, developmental aid is never going to solve any problems in Africa because, in fact, aid itself is the problem.  And the only way to stop the downward spiral of over one billion people from Cairo to the Cape Town is to stop Western aid as soon as possible.  Wow!

When Dead Aid was first published, in 2009, it was branded heresy.  Moyo 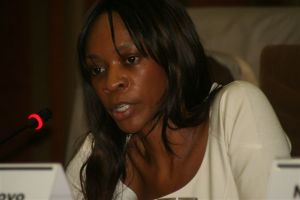 herself was accused of everything from shoddy research to “killing African babies.”  Yet, nobody disputes the numbers her theories are based on.  These figures are real.  Africa is not on the verge of a catastrophe; it’s right in the middle of one.  We passed catastrophe twenty years ago.  There are parts of Africa where soul killing poverty would be a relief, and it’s been that way for decades.

Yet, no matter how many times we change the tune, the song remains the same.  Live Aid was twenty-five years ago.  An entire generation of Africans were born, lived and mostly died since Bob Geldof and Michael Jackson turned the celebrity spotlights on.  Before that, it was UNESCO, CARE and an alphabet soup of other NGOs working flat out to feed, clothe and educate Africans.  Plus, since the 50s, African aid has been a standard component of most Western governments’ annual budgets.  The continent is awash with Western largesse.  Yet, it’s blatantly obvious that something isn’t working.  Dambisa Moyo may not have the right solution, but she has certainly identified the problem.  Western aid to Africa doesn’t work.