Last week, Vancouver Coastal Health, the organization in charge of keeping me and a couple of million other people healthy, set off the stupid alarm.  They announced a pilot program, beginning in October, to provide free crack pipes to drug users (Stay with me!) as part of their Harm Reduction Program.  Their rationale is crack and crystal meth smokers are transmitting dangerous diseases like HIV and Hepatitis C when they share old and damaged pipes.  Also, they say that providing a kit with a new pipe, mouthpiece, filter and a condom to addicts will bring them into direct contact with healthcare workers who can offer health information and encourage them to seek help for their addiction.  Dr. Reka Gustafson, a Vancouver health officer, was quoted in The Vancouver Sun as saying, “We know there’s a demand and chances are what we’re going to be able to supply won’t last very long.”  So, apparently, this offer is good only while supplies last and will cost between 50 and 60 thousand dollars.  What wrong with this picture?

At the risk of being labelled an anti-crack crank, does anybody down at VCH realize these folks are smoking crack?  The Risk Reduction train has pretty much left the station, folks.  I’m no expert, but I’d wager a few loonies that smoking crack is generally detrimental to maintaining a healthy lifestyle.  And providing addicts with the implements of their own destruction simply can’t be the best strategy available for risk reduction.  I might be missing something, but I’m not following the logic here.  To me, giving these people pipes is like handing a guy with emphysema a carton of Marlboros to reduce the risk he’ll encounter walking to the store to buy his own.  Call me old-fashioned, but I remember a time when local health agencies were there to promote health and well-being, not aid in their destruction. 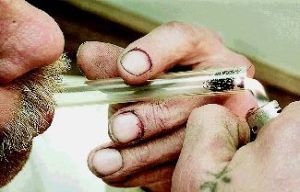 Hepatitis C among any segment of our population.  These are high-rent diseases that cost all of us a boatload of bucks to treat every year.  Nor do I have a problem with Coastal Health doling out dollars for preventive medicine programs, especially if they’re as cheap as this one seems to be.  Honestly, 50 or 60 thousand is nothing.  That kind of money doesn’t even buy a good-sized nurse these days.  Besides, I’m fairly certain that Coastal Health administrators and executives eat more than that in expense account money.  My problem is nobody in the glass towers has thought this thing through.

Here’s the deal: the entire program seems to be based on one single item of hard evidence: crack and crystal meth addicts share their pipes.  From that, experts have deduced, that chances are good, diseases like HIV, Hepatitis C and others are spread across the addicted population.  There haven’t been any studies to prove this, but it seems a logical conclusion.  Now we have cause and (probably) effect.

Unfortunately, here’s where Coastal Health turned on the stupid machine.  I hate

to be rhetorical but how does providing crack addicts with brand new pipes prevent them from sharing their new toys with the less fortunate who didn’t happen to go down to Coastal Health that day?  I would venture to guess that straight-out-of-the-wrapper pipe gets infected on its first use – and re-infected forever after.  I would also venture to guess that your average crack addict is not going to discard or sterilize the new pipe they’ve just used.  It’s been my experience, that crack and crystal meth users are not the most logical of our neighbours.  They’re not going to go back to Coastal Health until they either break or lose the pipe they’ve been given — or, the cops (who are mandated to seize drug paraphernalia, regardless of where it comes from) take it away.

So, in the end, how does this Coastal Health program keep me and a couple of million other people healthy?  It doesn’t.  It’s a proven fact that addicts share their pipes; giving them new ones doesn’t add or subtract from that fact.  If HIV and Hepatitis C are spread by shared pipes, then these diseases will continue to spread.  Fifty thousand dollars later; we’re still in the same place — except by providing the necessary equipment, Coastal Health may have actually contributed to the destructive addiction of several thousand people.  They’ve continued (and perhaps even enhanced) the unholy connection between the addict and the dealer.  And they’ve probably unwittingly assisted in maintaining all the social ills — like poverty, theft and prostitution — that characterize widespread drug use.

There is a cure for addiction, even on the scale that my city faces.  However, as comedian Ron White has said many times, “There’s no cure for stupid.”