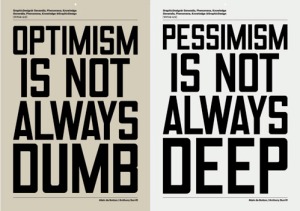 One of the problems optimists have these days is telling their story without sounding like somebody’s half-witted grandfather.  Cynicism is de rigueur in the 21st century, and anything less than “ain’t it awful” is seen as Jack trying to explain the magic beans to his mom.  According to most pundits, it’s going to get a lot worse in our world before it really gets bad.  Depending on who you’re listening to, the future is unfolding as a close race between hordes of blood thirsty jihadists, dogpaddling across rivers of poached polar bears to get at us, and China giving North Korea the green light to blow us to smithereens.  That is, of course, if we don’t bankrupt ourselves first in a sea of consumer gluttony and public debt.  And that’s just the big picture.  There are tons of equally gloomy little snapshots getting taken every day.  As Tip O’Neill once said, all politics are local and you should hear what the neighbours are saying about my city.

While I’m not opposed to looking at the world through soot-coloured glasses (if you haven’t noticed I do a lot of complaining) I do know enough about history to understand that nobody should pencil in the apocalypse just yet.  Besides, there’s a big difference between saying Barack Obama is a dolt and saying we’re all doomed.  Barack Obama’s place in history hasn’t been decided yet, and I can call him what I like.  But predicting doom and damnation is a serious business that has consequences — first of all, people start believing that crap.

Here’s the situation: our world is in a hell of a mess; there’s no denying it. 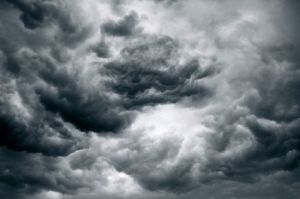 However, name me a time — since Lucy and her girlfriends started walking on two legs — that the world hasn’t been in a mess.  Hark back to the euphoria of your youth if you like, or even beyond, and you’ll still find the forces of evil breaking windows and tearing up the grass.  History is like that: there’s a long line of ordinary people who just want to eat, drink and watch the ballgame (or the joust) on Sunday, but then there are always a few jerks who want to make it hard on the rest of us.  We just happen to live at a time when the few jerks have the upper hand.  I’ll grant you most of this is due to our own stupidity, but that’s no reason to throw in the towel.

History shows us that bullies tend to push when they think they can get away with it.  We’ve seen that from Alexander the Great to Adolf Hitler.  Alex’s hoplites were pretty badass at the time and so were Hitler’s panzers.  Yet look around you, folks: I don’t see either one of them strutting the streets these days.  My point is there were probably plenty of Persians predicting the end of the world when the Macedonians hove up on the horizon — and doom merchants peddling their wares in 1940 when Hitler cried havoc and loosed the tanks of war on Western Europe.  However, despise their dire warnings, we survived because history also shows us that bullies make themselves scarce whenever somebody pushes back.  The problem our world has is nobody’s pushed back in an awfully long time.

Unfortunately, this pacifism breeds pessimism.  Since nothing ever seems to get fixed in our world, we begin to believe our enemies are ubiquitous ghosts, difficult to catch and impossible to kill.  The equation runs like this: people are starving in Africa.
Send them aid.
They’re still starving.
Send them more.
They’re still starving.
What the hell’s going on?  Do they best you can.
This is only one example, but there are tons more.  And as the list lengthens pessimism grows — exponentially.  Our neighbourhoods are collapsing under the weight of illegal drugs.  Our financial well-being is being hijacked by amoral greed.  Poverty and homelessness are expanding faster than the economy.  The planet itself is choking to death on our waste — and on and on and on.  These are serious problems, but the real problem is as you read that list, can you imagine solutions – armchair strategies that you know would cure our social, political and economic ills?  I hope you can.  In our time, many people can’t.

to focus our attention on.  Our enemies are financial and mercantile institutions with no conscience, corporate NGOs that have become part of the food chain, recent graduates with time on their hands and sorry politicians whose vision extends only as far as the latest opinion poll.  These are the bullies of our time.  They’re our Tamerlanes, our Genghis Khans and our Mussolinis.  They are just as real and just as dangerous as every other madman or general who thought he was beyond the reach of history.

At the risk of sounding like Pollyanna I say we will defeat these enemies.  Maybe not in my generation or the next — but one day, people are going to climb the wall, Lech Walesa style, and push back.  We will sweep these bullies into the sands of history.  Our future is not written in black ink.  One day, Africans will feed themselves, debilitating drugs will not be socially acceptable, our energy needs will be controllable — and all the rest.  Most importantly, though, we will believe in our ability to manage and change our society.  Pessimism will not be a fashionable ploy and
the long line of ordinary people — who just want to eat, drink and go watch a ballgame — will continue.