A very wise man once said, “The problem with doing nothing is you never know when you’re done.”  As we march further and further into the 21st century, our society is discovering that this is indeed true.  Idle time is infinite in its scope, and even though we are harvesting it at a furious pace, it literally goes on forever.  It is the ultimate renewable resource and perhaps the only one that can save us from devouring our planet raw and abandoning the carcass to the cosmos.

Ever since human beings figured out there was a concept called time, we’ve been trying to get away from it.  I’m certain our relentless pursuit of leisure started when Lucy and her sisters looked longingly back at the apes and thought, “Those were the good old days.”  Yet, for most of human history, leisure has been a rare commodity, traded only by the wealthy.  The vast majority of our ancestors simply worked every day until it was too dark to see anymore and eventually dropped dead of exhaustion.  It wasn’t until organized religion came along that anybody even thought of taking a day off.  However, once those floodgates were opened, people just naturally gravitated to sitting on their ass.  Soon the Lord’s Day had company when a few extra holidays got sprinkled into the year.  Then it was half a day off on Saturday, a shorter work day, long weekends, paid vacation, early retirement and the list goes on and on.

The idea, of course, was that people need time away from work in order to

recharge their life spirit, enjoy the arts, relax and metaphorically take a moment to smell the flowers.  I suppose at some point, in the olden days, we did do some of that stuff, but in this century it’s all about entertainment.  Somewhere back in the mid 1950s, we sat down to watch television and now– sixty years later– most of us just aren’t getting up anymore.  In fact, between video games, cell phones and Smart TVs, some people never leave the world of entertainment.  We’re rapidly approaching the point where, at any given moment, more people in our society are passively doing nothing than actively doing anything.  The best we can hope for is a game of Wii tennis, but for most people, it’s only Season 3 of Everybody Loves Friends or Level 8 of Angry Birds™.  We’re wasting so much time we could build a parallel reality with the leftovers.

However, before you jump to the natural conclusion that we’re entering some kind of a slobbering, Trans Fat, sci-fi dystopia, there is a silver lining to this soulless dark cloud.  Our wall-to-wall lust for entertainment might just be the thing that saves our dying world.  Think about it!  The human species, who have 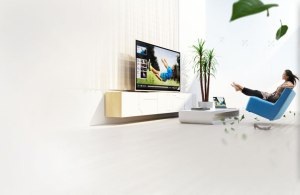 been digging, chopping, burning, bullying and paving our planet for over 5,000 years, are now fully contained by all nine seasons of The Beverly Hillbillies – delivered directly to their homes or mobile devices.  All they have to do is keep their eyes open.  Likewise, the reckless ambitions of millions of people are being played out every hour as billions of harmless Black Ops mouse clicks that disappear instantaneously, without a trace.  The only casualty is Carpal Tunnel.  Rhetorically speaking, what’s wrong with a guy selling a million dollars worth of The Rainbow App he developed in his parent’s basement?  (The only resources he consumed were grilled cheese and Pepsi™.)  Especially if he sells it to the inert among us who prod the unicorn to do tricks for a day or two and then move on to The Flying Witch App, thus repeating the cycle of mythological abuse.  It’s all thin air, guys!  Without substance, it does no harm.  Plus, and here’s the beauty of it, it’s economically infinite.  Resurrected sit-coms from the 80s are selling just as often as 1st run movies, and nobody is getting tired of blasting the bad guy, the beast or the undead zombie warrior.  It’s capitalism at its finest – supply and demand meshed in perfect harmony.

The reality of our times is we are now massive passive consumers of inactivity.  We can rail all we want about the Dark Side, but– as with any drug – good luck taking it away!  Karl Marx may have been right in the 19th century when he almost said, “Religion is the opiate of the masses” but here in the 21st, God takes a back seat to Netflix, Warcraft and Facebook.

One thought on “Entertainment is Us!”