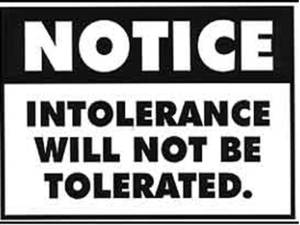 Normally, I don’t make public service announcements — mainly because serving the public is a pain in the ass.  (That’s why so many public servants are in it for the money.)  I say “normally” because sometimes there’s such an overwhelming need for the public to be informed that even guys like me have to step into the breach.  That time is now.

For the last several years, our society has been throwing around the words “tolerance” and ‘intolerant” as if they were rice at a redneck wedding.  This promiscuous overuse has turned them (and their various incarnations) into the conversational equivalent of an advertising slogan’s tagline.  Everybody recognizes the words, but nobody really gives a damn what they mean.  Or as 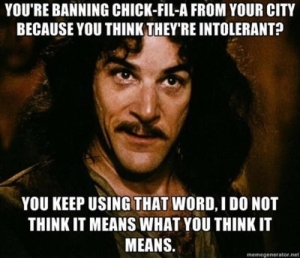 For the record, “tolerance” is a noun that comes from the verb “tolerate” which according to my Oxford Paperback Dictionary (1979 edition) means (without the blah, blah, blah) “to permit– without protest or interference.”  Are you with me so far?  The same dictionary defines “intolerant” as an adjective which means “unwilling to tolerate ideas or beliefs etc. that differ from one’s own.”  Are we still good?  These two are opposites.  If one does not “tolerate” another person’s viewpoint, they are, by definition, “intolerant.”  Questions?

In practical terms, this means that, as a tolerant society, we “permit — without protest or interference” other people’s points of view.  We can disagree with them all we want, but we do not swear at them or call them names or question their right to hold that point of view.  For example, there are people in our world who approve of gay marriage.  These are regular folks who put their pants on one leg at a time and don’t eat kittens for breakfast.  They may be part of the Mauve Mafia, but I doubt it — and even if they are, that’s no excuse for name calling or any other such nonsense.  As members of a tolerant society, we must respect their right to hold their stated opinion — even if we do not respect that opinion, itself.

However, tolerance is not that easy.  There’s more to it.

As another example, there are people in our world who disapprove of gay marriage.  These are regular folks who put their pants on one leg at a time and don’t eat kittens for breakfast.  They may be part of a Right Wing Conspiracy, but I doubt it — and even if they are, that’s no excuse for name calling or any other such nonsense.  As members of a tolerant society, we must respect their right to hold their stated opinion — even if we do not respect that opinion, itself.

That’s the way tolerance really works, folks: the bus goes all the way around the park.  And I’m not merely talking about gay marriage; that’s just an issue that is currently trending and screamingly obvious.  Honestly, I don’t care one way or the other.  Since I’m not getting any gay marriage proposal these days, it doesn’t affect me. 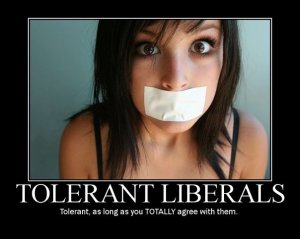 However, in the 21st century, there seems to be a quaint idea that tolerance is the exclusive property of the liberal left.  It’s the buzzword that’s code for a particular array of ideas.  The argument is that an enlightened society has certain values that are universally accepted and contradictions need not apply.  Liberal ideas like gay marriage, corporate greed, gender insensitivity and all the other usual suspects from the politically correct movement.  It’s amazing to me that reasonably intelligent people are wandering around this world, saying things like “I hate those bastards: they’re so intolerant.”  Or, my personal favourite: “We cannot allow that group to speak because they represent intolerance.”  Huh?  Of course, the great irony is, that in our society, the last batch of folks who were so arrogant about dictating the one and only path to human salvation was the Medieval Catholic Church — twenty minutes before da Vinci and his buddies turned on the Renaissance.

So this is a public service announcement:  Tolerance is a two-way street and if you don’t want history to judge you as a jackass, show a little tolerance when somebody expresses an opinion you don’t like.

This entry was posted on August 8, 2012 by wdfyfe in Social Media and tagged Chick-Fil, intolerance, liberal intolerance, Toleration. 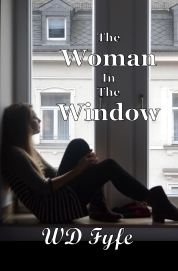 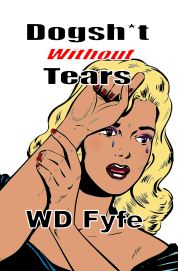