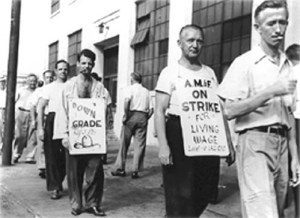 Today is Labour Day — a holiday that has fallen on hard times of late.  I have a long connection with Labour Day.  Despite outward appearances, I have actually laboured.  I was once a member of the now defunct AUCE (Association of University and College Employees) Union.  I have a Withdrawal Card from the International Meat Cutters Union and I belonged to the Rock and Tunnel something-or-other for two weeks one morning.

My father was a union man – a Teamster for most of his life.  He was nine years old during the Great Strike in Britain in 1926, and according to my grandmother, was enraged when he wasn’t allow to eat at the Union Soup Kitchen with his schoolmates.  My grandfather wasn’t a miner; he worked for an insurance company.  After the Great Strike was broken, he was fired.  Apparently, he’d been cooking the books so that the Scottish miners who couldn’t afford the premiums during the strike wouldn’t loss their insurance.  My grandparents emigrated soon after that.

When I was a union member, I went to all the meetings and once I even got to 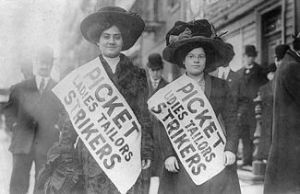 speak.  I don’t remember what I was for or against, but I was part of the process.  I have both walked picket lines and tried not to cross them but to me, as to most people, Labour Day in just an end-of-the-summer three-day-holiday.

It’s not supposed to be that way, you know.  Labour Day is supposed to honour the men and women who took the early bus, worked hard and stuck to their principles when the people they worked for had none.  It’s supposed to show us where we came from and how we got here.  Unfortunately, in 2012, Labour Day is more about barbeques than collective bargaining.

The problem is, since the 60s-going-on-70s, the trade union movement has been steadily losing the PR battle.  Even as far back as the 80s, when Reagan told the Air Traffic Controllers to take a hike, there was no general outcry of union-busting — even though that’s exactly what it was.  During the 90s and after the turn of the century each economic crisis pushed union membership further into the background even though it should have been taking centre stage.  So, for the most part, these days, if you don’t already belong to a union, you’re not all that enthusiastic to join one.  It’s more a condition of employment than a utopian vision of the future.  In fact, union membership in the private sector has been declining for half a century.  It’s only the big public sector unions that can boost an increase in membership.  It’s strange, but just as the need for unions is increasing, their appeal in dissolving away. 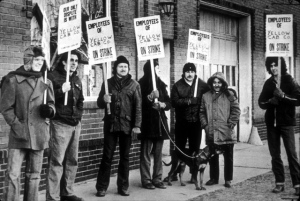 The unfortunate truth is that the trade union movement hasn’t kept up with the times.  They’re fighting 21st century labour battles with 19th century thinking.  Most union members in today’s economy make decent money.  They don’t toil in sweatshops like their grandparents did.  They have paid vacations and pensions and medical leave.  So when it comes to the public face of the union – the strike – it’s hard to convince anybody that union workers are downtrodden.  Likewise, the ridiculous rhetoric that all employers are closet robber barons, whipping the proletariat and pouncing on widows and orphans, lost its credibility years ago.  The antagonistic stance most unions still take was born in a day when some negotiations took place at the point of a gun.  The world has moved on since then.

The trade union movement needs to quit being production’s nasty little brother.  Back in the day, it was perfectly acceptable to shout its demands with a clenched fist.  But that adolescence is over.  With maturity comes greater responsibility.  Unions (especially in the public sector) have to become willing partners in the means of production, not cunning adversaries.  Most importantly, unions must demonstrate their relevance to the here and now.

Labour Day is a mostly forgotten holiday because–instead of reflecting on and honouring its turbulent past– the trade union movement wants to continue to live there.