Back in the Stoned Age, when I was growing up, there was an unwritten rulebook, which, like The Pirate’s Code, acted as a kinda running guide for the transition from primitive adolescent to responsible adult.  It covered pretty much everything — except sex (which was trial and error) and how to make a salad.  We didn’t so much live by the rules as reference them in times of crisis.  For example, when those pesky grandparents showed up with birthday money you moved the illegal agriculture off the “dining room” table and took down the more aggressive examples of bachelor art.  Here in the 21st century, that old way of life is more-or-less passé and we’ve discarded the rulebook.  After all, it’s usually grandma who’s hiding the drugs these days, and they’re dancing about boobs on the six o’clock news.   However, even though I say good riddance to most of the hypocrisy we practiced back then, it seems a shame that we threw the baby out with the bath water and no longer tolerate some of the niceties of civilized behaviour.

One of the cornerstones of life, as we used to live it, was that old people were stupid.  Every generation knew this.  Somewhere around menopause (male and female) the human IQ drops about twenty points and then continues to slowly decline on a straight shot to the grave.  People don’t actually die of old age; they simply become too stupid to live.  This is one of the tried and truisms, handed down from parent to child since Achmed the Unwashed decided to set up shop in the Euphrates valley – circa 40,000 years ago.

Of course, this utter stupidity never prevents the average old person from running off at the mouth.  They consider it a combination of their right to make noise and duty to be heard.  When I was a kid, most of the blather was irrelevant instructions on how to survive a world war – which hasn’t come in handy, yet.  (FYI, I don’t think my generation ever did convince the parents that the only thing walking away from World War III would be a cockroach.)

However, I digress.  The unwritten rule was that you listened to these old gasbags jawing away.  You shut your mouth, made all the right noises in all the right places (polite was another of the unwritten rules) and, then, after they’d cleared off, you did as you damn well pleased.  The sage advice from the grey hairs was not for you; it was for them.  It was a catalogued recollection of all the opportunities they missed, the risks they shouldn’t have taken and the places they screwed up.  Everybody knew this and acted accordingly.  Unfortunately, those days are gone, and our world is the lesser for it.

Since we threw out the old unwritten rulebook, the same people who scoffed at their parents are now demanding we take their 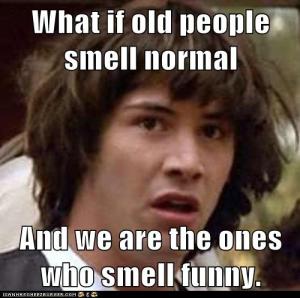 ancient wisdom seriously.  They want to keep running the show.  The problem is they’re retrending the ideas, solutions and institutions they’ve been yipping about since back when Bruce Willis still had hair.  The world has changed since then, and just FYI, that crap never worked in the first place.  And, here’s the kicker: people are listening to these fossils.  This is ridiculous.

I’m as clever as the next fellow — and smarter than most — but I have no clue what’s going on in 2013 and no right to make decisions about it.  I grew up in a time when baseball players swung for the fences, casual sex was important enough to keep private and the truth was protection against prosecution.  The world I see out my kitchen window is alien to me.  Hell, I have no idea what the 83 other buttons on the TV remote are there for – and neither does anyone else on the business end of 50.  We’re not supposed to.  We’re not supposed to be setting the agenda; we’re supposed to be complaining about it!

This is the first generation where the old folks are unwilling to go gentle into that good night.  They’re clinging to power like drunks hanging onto a lamppost.  Unable to go forward, unwilling to go back, they have no idea why they’re there in the first place.  The only thing they do know for certain is if they ever let go, they’re going to be lost in the gutter.

Me, I liked the olden days.  You knew where you stood.   And just like my parents and their parents and theirs — back a thousand generations – sometimes, I’m consumed with nostalgia and want to return to a more civilized time.  A time when young people were seen and not heard and old people were heard but never listened to.