Where the hell is PETA when you need them?  Nowhere to be seen!  They’re probably going celebrity naked in the parking lot of some KFC in beautiful downtown New Zealand, protecting the chicken parts from the Colonel’s 11 secret herbs and spices.  I’m not saying these folks are useless (they’re so close nobody has to say it) but it strikes me that they’re pretty picky/choosy about which animal’s right they want to defend.  While they’re jet setting around the world, taking their clothes off, I’m walking through a park in North America, seeing dogs (yes, more than one, and on more than one occasion) with nail polish!  The kicker is these aren’t perpetually abused Paris Hilton purse puppies; they’re regular dogs who stay, fetch and pee on trees.  I’m not heavily into anthropomorphism, but I don’t care how you slice it: forcing a trusting companion to look like an idiot in public is a violation of its right to a modicum of dignity.  If PETA isn’t going to do its job, what good are they?

In general, I agree with the Animal Rights people.  We’re sharing this planet with all manner of other creatures, and just because we’re the dominant species, that doesn’t mean we have carte blanche to kick them.  We’re civilized people, for God sake.  Our basic tenet should be “Do unto others…etc. etc.” and that includes no chasing them with guns, harpoons or pointy sticks and cutting off their body parts for tacky trophies, trendy lunches or hocus-pocus medicine.  It’s been a number of centuries since we’ve had to beat our food over the head just to eat it, and it’s time we realized that.

By the same token, I’m really tired of has-been celebrities making headline out of high profile attempts to deny what can only be called food’s natural destiny.  Now hear this!  The stated purpose of billions of chickens on this earth is to be extra crispy.  It’s the truth.  To all the vegetarians out there, good on ya.  However, millions of us are not of the faith; therefore, that chicken has to die for our culinary sins.  What the Animal Rights crowd doesn’t understand is the relationship between we humans and that chicken is not much different from our relationship to the cabbage in the coleslaw or the disodium ginaphinate (or whatever?) in the buttermilk biscuits.  We’re not friends, and we haven’t betrayed a trust.  Trying to square peg this into a moral round hole is a substantial waste of time, energy and resources.

This ultimately brings us back to my encounter in the park with the oddly-decorated Canis Lupus Famillaris.  While the Animal 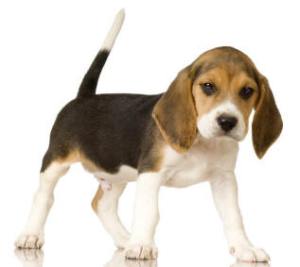 Rights crew have been prancing around the world in God’s underwear, reading the ethical riot act to anyone with a camera, all over North America, canines are being treated like crap.  It might not be SPCA-worthy, physical cruelty – but so what?  If you believe, as I do, that dogs are smarter than we give them credit for, it can`t be anything short of psychological abuse.  Dogs are not supposed to wear nail polish.  Nor are they supposed to wear jewelry, hats, coats, scarves, those stupid little socks or idiot reindeer antlers at Christmas.  (Okay, if you and your Chihuahua live at the South Pole, bundle him up for walkies, but otherwise it’s none of the above.)  Doing any of these things to an unsuspecting dog is breaking an ancient, sacred trust.

I’m not going to revisit tens of thousands of years of canine/human coexistence — there’s no need.  Over the centuries, dogs have given their masters unqualified trust, but in recent history, many of them are being repaid by being forced to look ridiculous for a few gratuitous grins or a funny Pinterest image.  I don’t know what these dogs are thinking, but you don’t have to be Cesar Millan to know it’s unethical to take advantage of a subordinate when you are in a position of power.  Yet, PETA (People for the ETHICAL Treatment of Animals) could give a rat’s bum for these designer dogs because it’s not sexy and it’s not trendy and it’s not oh-so-sensitive.  It’s just a mutt with a pirate hat and an eye patch.  PETA, you need to change your name or get out of the multinational worthy cause business!

One thought on “Animal Rights: So Very Wrong”