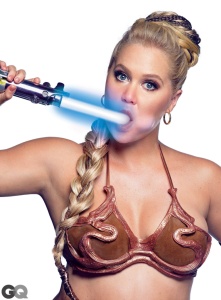 I just saw the latest GQ cover, and it looks like Amy Schumer is the new Tina Fey — which is odd because Tina hasn’t gone anywhere.  Tina, the old one, was something in her day.  She was brilliant straight out of high school and made her bones on Saturday Night Live, making fun of Sarah Palin and working with Jimmy Fallon.  Fallon, as everybody knows, was replaced by Amy Poehler when he went on to become the new Letterman — which is also odd because, in actual fact, Stephen Colbert is going to be the new Letterman.  You know Stephen from The Colbert Report, but before that he was the new Steve Carell on the old Daily Show with Jon Stewart.  FYI, there’s going to be a new Daily Show when Jon Stewart leaves in August, but that doesn’t matter because John Oliver is already the new Jon Stewart.  Meanwhile, back to Steve Carell. He was Michael Scott on The Office, basically the new David Brent from the original British series.  That version was created by Ricky Gervais who pissed off so many Hollywood egos at The Golden Globe Awards that he was replaced by Tina Fey and Amy Poehler.  Now, they’re going to be replaced because Amy Schumer is the new Tina Fey and Amy Poehler isn’t the right Amy.

So what have we learned?

Amy Schumer has totally won the Amy war with Poehler, and she’s such a bankable brand right now that she can even suck on Disney’s Lightsaber with impunity.

In order to end up sucking on Disney’s Lightsaber, you don’t necessarily have to practice your craft with Lorne Michaels or Jon Stewart, but given the comedy pedigree of most people in the funny business, it helps.

Everybody in comedy is so connected to everybody else it looks like Duck Dynasty with dick jokes.

And finally, Amy Adams was never considered a worthy Amy adversary even though Michael Scott (Steve Carell) from The Office once called her “the new and improved Pam.”  (Most people have forgotten that episode.)